Accessibility links
Gingrich On Why Bailout Plan Is 'Just Wrong' As Congress debates bailing out the U.S. financial system, House Speaker Newt Gingrich says saddling taxpayers with a $700 billion bill is a "very, very bad idea." He also says it could "create a bureaucratic control of our financial system in a way that will cripple us for 20 years."

Listen
Gingrich On Why Bailout Plan Is 'Just Wrong' 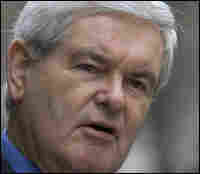 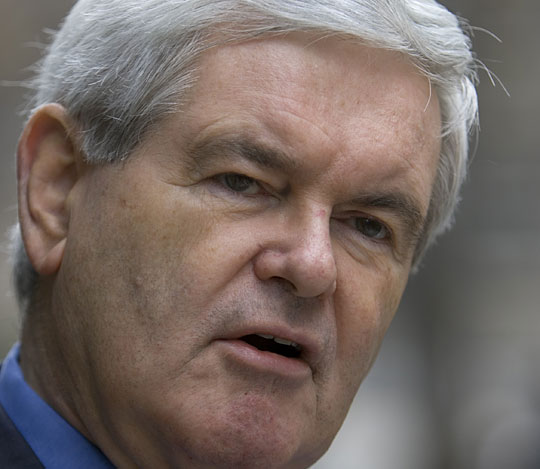 One prominent conservative urging Congress to step hard on the brakes in the $700 billion bailout plan is Newt Gingrich, the former speaker of the House of Representatives.

In Sunday's National Review online, Gingrich writes: "Congress was designed by the Founding Fathers to move slowly, precisely to avoid the sudden panic of a one-week solution that becomes a 20-year mess."

In a conversation with NPR's Melissa Block, Gingrich says he thinks the bailout plan is "just wrong," and that "it's likely to fail, and it's likely to make the situation worse over time." A transcript of their conversation follows.

This $700 billion bailout plan, this potential 20-year mess that you're talking about, comes from a Republican administration, comes from your own party. What's happened to Republican faith in small government and free markets?

Well, I think you have a Goldman Sachs chief of staff to the president and the Goldman Sachs secretary of the Treasury. And they convinced the president that the American people ought to send $700 billion to Wall Street, which I think is a very, very bad idea, and I would argue is a very un-Republican idea. I don't understand what they think they're doing.

Do you feel betrayed by the Bush administration and by the president?

Well, betrayed is too strong a word. I think what they're doing is just wrong. And I think that it's likely to fail, and it's likely to make the situation worse over time. And I think that [U.S. Treasury] Secretary [Henry] Paulson has shown almost no understanding of how a democracy operates. His initial draft would have given him $700 billion of your tax money with no oversight, no judicial review, no accountability. I mean, we're not a dictatorship.

But the idea, obviously, is that this goes to Congress and that provisions are written in — and that's just what they're doing now. Are you not reassured by what the debate is in Congress right now?

Well, the last time we were promised they were going to save us, it was $300 billion; it was a housing bill. Now we have brand-new liberal Democrats, many of whom — for example [Connecticut Sen.] Chris Dodd — was the largest single recipient of money from Fannie Mae and Freddie Mac, and he is the chairman of the Banking Committee. So the guy who got the most money is now going to write a bill to give taxpayers' money to the people who gave him money. Somehow, I am not reassured.

But Mr. Gingrich, a lot of the Republicans in Congress seem to be saying this needs to go forward.

Well, I think they're just wrong. I think we need to slow down, take a deep breath, hold public hearings, have experts testify, understand exactly what the agreement would be, where the money would go, how we would account for it. I don't think the taxpayers should be socked for $700 billion for welfare for Wall Street. I think it's fundamentally wrong, and I think that it is very likely to create a bureaucratic control of our financial system in a way that will cripple us for 20 years.

You know, when congressional leaders met on Thursday night with Secretary Paulson and with the Fed chair, Ben Bernanke, the message was dire. You heard Sen. Chris Dodd saying they were told we are maybe days away from a complete meltdown of our financial system. Don't you think that there's an imminent crisis here, that if they were to wait, there could be really drastic results?

To be honest, I don't know. Secretary Paulson has been consistently wrong for a year-and-a-half. He told us for a year-and-a-half this wasn't a dire crisis; this wasn't going to happen. So the very people who told us for a long time not to worry about it are — I know they're panicked. Whether that means that we should be panicked, I'm not sure. And I think the purpose of the Congress, the purpose of the House and Senate, is to be a check and balance on the executive branch, not to automatically write blank checks.

What if you're wrong?

I was just reading an analysis by a very sophisticated person who said that there's been at least one leak from a congressional staff briefing by Secretary Paulson, in which he clearly indicated he intended to buy assets at above their market value. And that — why should the taxpayer do that? I mean, why are we not saying, 'We'll provide enough capital to avoid collapse, but we're not going to provide enough capital to guarantee the profits of Wall Street people' — who, after all, last year, at Goldman Sachs alone had three people each earning $73 million a year. Now, why should we bail them out?

What are you saying the incentive would be for, say, Secretary Paulson or Ben Bernanke to be rushing something through if it weren't urgently needed? What would their motivation be for that?

A couple of things — first of all, they're probably genuinely panicked. And I think that's real. I think they're tired; I think they've been consistently wrong, and now they're looking at a precipice that's very frightening. I think, second, that they have a very Wall Street-centric view of the world. And I think that rather than saying, 'What are the big, profound changes we need to fix America?,' they are saying, 'What are the immediate quick fixes for Wall Street?' — which I think, in the long run, just makes us weaker and sicker.

I think, third, they know that if they don't rush it through, it has no hope, because as the American people learn the details, they're just going to scream at their House and Senate members.