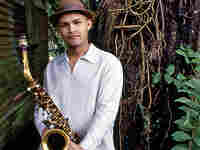 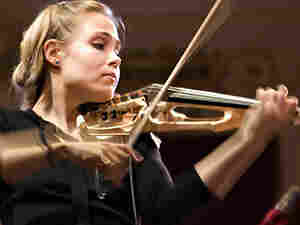 In the latest round of what are often called "Genius" grants, the MacArthur Foundation has just named 25 new fellows, each of whom will receive a $500,000 award. Four of the recipients have carved out innovative careers in music: violinist Leila Josefowicz, writer Alex Ross, saxophonist Miguel Zenón and sound artist and instrument inventor Walter Kitundu.

From ragtime to rock, from Bach to brand-new compositions, violinist Leila Josefowicz says that she has fun playing it all.

Josefowicz was just 10 years old when she was featured in a nationally televised tribute to Bob Hope. At 16, she made her Carnegie Hall debut and won the Avery Fisher Career Grant. She was on her way to becoming a successful concert violinist, playing the standard 19th-century concertos and sonatas. But in her late teens, she says she felt an itch.

"I felt, at that time, that I needed to do something more," Josefowicz says. "That classical music couldn't depend so heavily on the standard works alone. Also, just for my own curiosity and sense of exploration, I wanted to start playing more avant-garde works."

For the last eight years or so, Josefowicz has concentrated on music by today's composers, championing works by John Adams and Oliver Knussen. This season, she's performing three new concertos written especially for her by Esa-Pekka Salonen, Colin Matthews and Steve Mackey.

"There's so much great music out there that isn't heard enough," Josefowicz says. "It's not that I don't absolutely love the Brahms and the Beethoven sonatas, but let's keep the concert programs interesting."

All MacArthur fellows have no idea that they're in the running. Winners simply get a phone call out of the blue with the news of the award and its $500,000 cash prize. When Josefowicz got the call, she said it was like an out-of-body experience.

"It was such an incredible shock," she says. "I wasn't particularly coherent. I said, 'Let me make sure I understand this correctly, that I'm not just being considered. You mean this has already been decided.' And the lady said, 'That is correct.'

"It makes me feel very glad, because all my passions for bringing new music to people and continuing this breathing art form [are being] recognized, and I'm really happy about that."

Alex Ross is the celebrated music critic at The New Yorker, as well as the author of the recent book The Rest Is Noise, which has been described as a gripping history of the 20th century through its music.

In an email, Ross said that he had ignored several cell-phone messages from Chicago, where the MacArthur foundation is headquartered.

"Eventually, the MacArthur people tracked me down at The New Yorker," Ross says. "I was shocked — I had no idea that this was possible. And, of course, I was hugely grateful. I was instructed not to tell anyone, and I had to leave the office to avoid walking around with a silly expression on my face."

In his book, Ross explores the richness of music in the 20th century, explains how it evolved from the late romantic formulas, and sets the century's great composers within their vibrant and sometimes violent social and artistic terrain.

A native of San Juan, Puerto Rico, alto saxophonist Miguel Zenón has been hailed as a master of the old and the new. His performances have continuously topped critics' and listeners' polls in The New York Times, Jazz Times and Downbeat.

Zenón has released four recordings as a leader, including Jibaro, which blends the spirit of the rural folk music of his native country with the sounds of contemporary jazz.

In 2003, Zenón was appointed to the Kennedy Center's Jazz Ambassadors Program, traveling to teach and perform in West Africa. In April, the 31-year-old musician received a Guggenheim Foundation fellowship to work on his current project, centered on the Plena music from Puerto Rico.

Walter Kitundu, 35, is a multimedia artist based in San Francisco.

He's the creator of the Phonoharp. Described as part sculpture, part functional instrument, the Phonoharp is a cross between a turntable and a stringed instrument; it uses wind, light and the movement of birds to produce sounds.

Among Kitundu's inspirations are hip-hop, traditional music from Asia and Africa, and the intersections between technology and the natural world. He's currently a multimedia artist for the Exploration Museum of Science, Art and Human Perception in San Francisco.