Accessibility links
Cold War Kids: Pondering Personal Politics Cold War Kids' second album, Loyalty to Loyalty, is based on the work of a little-known philosopher named Josiah Royce, who challenged Nietzsche's positions in the early 1900s. The art-pop band straddles the line between both philosophies in atypical rock fashion.

Something Is Not Right with Me 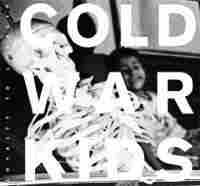 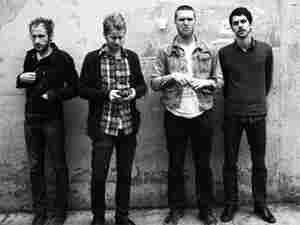 In the 1900s, a little-known California philosopher named Josiah Royce challenged Friedrich Nietzshe's ideas from a century earlier about the "will to power" and the ubermensch, or superman.

In his paper "Loyalty to Loyalty," Royce said that the ultimate pursuit of mankind should be to live in community and embrace each other, not to try to trample each other and rise to the top. A lot of the songs on the Cold War Kids' new album, which shares the name of Royce's paper, straddle the line between those philosophies.

Don't worry: The album isn't a philosophical treatise, nor is it overtly political, but when you scratch the surface of his lyrics, Nate Willett does ponder issues of personal politics. In the song "Welcome to the Occupation," for example, he debates the value of being a teacher versus following a more selfish dream to be an artist.

Willet taught high school English in Torrance, Calif., but says the job didn't provide him with "a lot of creative space to really be very inspired to be a teacher.

"This is right before we started touring," he adds, "and I very much wanted to be an artist and have that kind of freedom."

One of the record's slow-tempo tunes, "Every Man I Fall For," is about relationships from a woman's perspective.

"Coming from a divorced family, my mom was very important to me," Willett says. "And I've always been very sensitive to a woman's... to how women just, they generally get more screwed by relationships, be it marriage or dating ones, than men do. And even that — is that a very sexist thing to say? I don't think so. I think it's just generally true."

For a band that talks about Nietzsche and writes quirky, sparse indie-pop, Cold War Kids did quite well with its first full-length album, Robbers and Cowards. That has put pressure on the band to avoid the infamous sophomore jinx. Willett insists the group isn't heading down that road.

"The choices that we make have always been organic ones, to try to grow at a rate that makes sense," Willett says. "Not necessarily talking about, 'Is there a great single? Is this a big breakthrough for us? Is this the next level for us?' But just write songs. Yeah, there is a stress, and the way we deal with it is to ignore it."

There's no need to get too stressed; on Loyalty to Loyalty, the band continues its compelling efforts to deconstruct the pop infrastructure. Cold War Kids' wide-open, high-energy arrangements give all four instruments equal billing, leaving plenty of uncluttered space in between.

"People get that there are four instruments, and they all have unique voices, and in that way, it is very atypical of a rock 'n' roll band," Willett says.

Cold War Kids' members are indeed atypical: making indie-punk and art-pop with minimalist lyrics and intellectual roots, with the energy and pop appeal to get spins on commercial radio and actually sell CDs.