Accessibility links
Stephin Merritt: Musical Polymath Calling Stephin Merritt a reluctant performer is putting it lightly. Nevertheless, the Magnetic Fields leader bellied up to a microphone by himself in a KEXP session. Here, he surveys his expansive catalog and answers questions in the deadpan style that makes his songs so great. 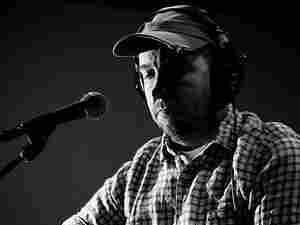 I recently referred to musical polymath Stephin Merritt as "my beloved nemesis," and meant it in the most affectionate way. Merritt's sublime music — with The Magnetic Fields, with Gothic Archies and in myriad other projects — gives me a reason to live. Like the Joker needs Batman, I need Stephin Merritt to keep me on my toes. And humble.

To have Merritt drop by KEXP while touring in support of The Magnetic Fields' latest album, Distortion, was a major coup. As fans know, calling him a reluctant live performer is putting it lightly. Nevertheless, he bellied up to the microphone by himself and treated us to a brief but well-rounded survey of his expansive catalog: a selection from the Eban and Charley soundtrack, one song apiece from the albums Get Lost and Distortion, and a number originally composed for the audio book of Lemony Snicket's The Hostile Hospital. The only thing that could make me grin more than hearing Merritt reiterate "smile" in a deadpan bass that makes it sound like that word had never crossed his lips is the expressionless way he opens "The Nun's Litany," droning, "I want to be a Playboy's bunny."

Merritt's visit also afforded us a rare chance to pull back the curtain and learn a little more about his creative processes. With the same wit and precision he brings to his lyrics, he fielded questions about the challenges of rhyming traditional Chinese characters (complete with a demonstration), why living in Los Angeles hasn't influenced his aesthetic (but Bali might), and his progress on a stage adaptation of Neil Gaiman's Coraline. This might be the only in-studio session in KEXP history where the chitchat runs longer than the songs, but every second of Merritt's visit is edge-of-your-seat entertaining.