Accessibility links
Robert Downey Sr., Underground And Off The Cuff Robert Downey Jr. is a name well-known to moviegoers, but did you know that the actor's father also happens to be in the movie business? Robert Downey Sr. is an acclaimed director whose early underground films have just been restored. 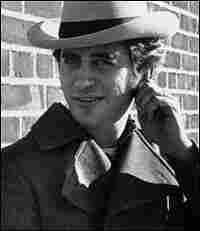 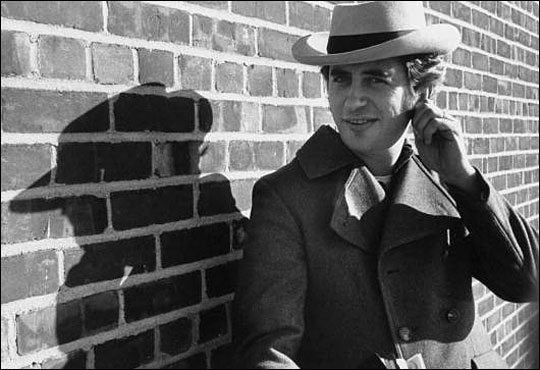 Robert Downey Sr., shown here in 1969, shot a number of low-budget underground films in New York City during the 1960s.

The two Downeys: Father and son attend a benefit in New York in May 2008. Stephen Lovekin/Getty Images hide caption 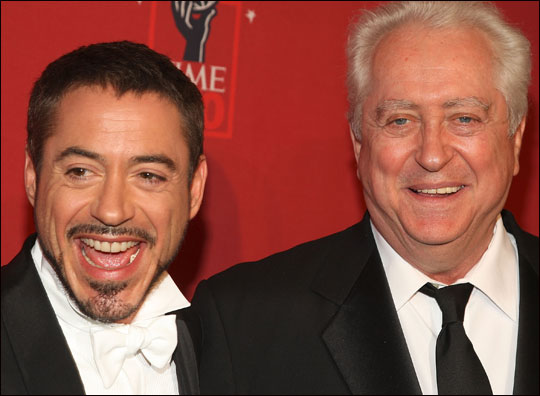 The two Downeys: Father and son attend a benefit in New York in May 2008.

Robert Downey Jr. is a name well-known to moviegoers, but did you know that the actor's father also happens to be in the movie business? He's an acclaimed director whose early films were central to New York's underground film scene of the 1960s.

Robert Downey Sr. is probably best known for his 1969 satire Putney Swope, a send up of both Madison Avenue and American race relations. In the film, an African-American executive takes over an all-white ad agency, renaming it "Truth and Soul" and producing some hilarious commercials before falling victim to the siren song of money and greed that he pledged to silence.

Downey was working at an ad agency when he made Putney Swope; it was one of several no-budget films he shot on the streets of New York over the course of a decade.

Critics and scholars say Downey's movies are very important, and the powers that be at New York's Anthology Film Archives agree. The organization, which was responsible for saving Andy Warhol's first films, has teamed up with a foundation headed by director Martin Scorsese to preserve three of the director's earliest works — Babo 73 (1964), Chafed Elbows (1966) and No More Excuses (1968) — in new 35mm prints.

'A Small World, Where Everything Collided'

So, Downey's films were groundbreaking experiments, American cinema's answer to the French New Wave of Godard and Truffaut, right?

"No, no, no, no," says the director. "We were just out having fun doing this because we could. ... Here we were, writers and cameramen saying, 'Hey, you got a script; I got a camera; let's go do something.'"

Chafed Elbows, which Downey made for $25,000, was an underground hit when it first came out. It's an absurd comedy whose main character, Walter, wanders around New York City, moving from one surreal encounter to another while cultivating his own nervous breakdown.

At one point, an artist paints the initials "A.W." on Walter's coat; when asked whether they stand for "Andy Warhol," Downey rolls his eyes as if the answer were obvious. Back then, he says, everybody in New York seemed to know everyone else. He even worked with the young Woody Allen.

"It was a small world, where everything collided," Downey remembers. "People would help each other: 'You need a camera? Just get it back to me by Monday. Editing room? You can use it Friday night, Saturday, Sunday.'"

The spirit of random encounter is also at the center of another of the restored films — a comedy, of sorts, called No More Excuses. The film cuts back and forth between four storylines: one about the assassination of President James Garfield; another made up of documentary footage from New York's 1960s singles scene; a third featuring a Civil War soldier lost in 1960s New York; and the fourth featuring the director of the Society for Indecency to Naked Animals, who believes that all animals should be clothed.

From these disparate stories, Downey and his collaborators managed to wring pathos, humor and even social commentary that seems relevant today.

Anthology Film Archive's Andrew Lampert, who oversaw the restoration, says No More Excuses hadn't been shown for 40 years — which is a pity, he says, because it's truly a groundbreaking film. Even though Downey doesn't take the movie all that seriously, Lampert thinks it's as important as D.W Griffith's masterpiece, Intolerance.

"They're two films that both have multiple storylines," says Lampert. "Rather than being smoothly interlaced, they both just hit the wall a million times over and just keep going.

"No More Excuses is as raucous a movie as you could imagine. You just keep waiting for the guy in the gorilla suit to come out but, actually, it's a real gorilla! It has everything a '60s movie should have in it, just sort of out of order and all over the place."

Lampert says Martin Scorsese's film foundation jumped at the chance to fund Anthology's restoration of the three films. For his part, Downey says he's happy that his work has younger fans — especially those who were born after the films were made. He says their enthusiasm for his early work has inspired him — at age 71 — to go to work on a new film.

"They've made me think about the time I have left on this planet," he says. "I want to go back to that spirit of trying things and having fun. ... Let's do something a little different than Act 1, Act 2, Act 3. Ugh, what a bore that is."