Accessibility links
Who Comes After North Korea's Kim Jong Il? With the leader's health and control over North Korea in question, experts wonder what kind of government will take shape in his absence. Kim apparently has not groomed a successor in the same way his father did with him. 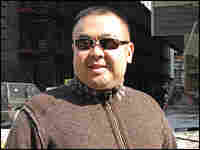 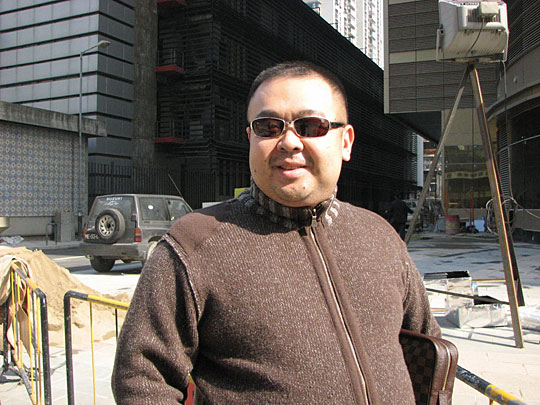 Kim Jong Nam, the eldest son of North Korean leader Kim Jong Il, seen on Jan. 30, 2007, in Macao. Little is known about the leader's other children.

Mocked for his beige jumpsuits and elevator heels — and dismissed by President Bush as a pygmy — North Korea's reclusive leader Kim Jong Il has been seen as a dangerously irrational dictator. But emerging reports of health problems are now leading people to wonder what North Korea will look like after "Dear Leader."

Kim's no-show at a military parade marking the 60th anniversary of the Stalinist state was spectacular, causing a frisson of fear and worldwide headlines.

Unconfirmed reports from a variety of foreign intelligence sources say he is recovering from surgery after a cerebral hemorrhage, but the true extent of his health problems is unclear.

One report said Kim was partially paralyzed, while Chinese sources reported he was suffering from convulsions. Meanwhile, South Korean intelligence stated he had recovered enough to brush his own teeth. The truth is, no one knows his condition.

'No Succession Plan In Place'

What's more, his biographer Michael Breen says, is that no one knows who his heir apparent is.

"North Korea has not announced anything," Breen says. "There's no evidence that someone is being groomed. My conclusion is that there is actually no succession plan in place."

"The other two are in their mid-20s, went to school in Europe. One of them is said to be an Eric Clapton fan. This is sort of [the] front line of our intelligence on these two," Breen says.

Kim Jong Il's father spent more than two decades grooming his son for power, but the North Korean "Dear Leader" hasn't done the same for any of his sons, perhaps fearing that any dilution of his absolute authority would make him a lame-duck leader.

Another communist dynastic succession is opposed by the international community — even by Pyongyang's closest ally, China. Cai Jian from Fudan University in Shanghai says China's leaders are weighing the options.

"We think the three sons are lacking in ability, experience or knowledge to take on power," Cai says. "But China would not like to see military hard-liners seize power. We'd like to see the emergence of a collective leadership, like in China."

The family has thrown up one other important political figure — Kim's brother-in-law, Chang Sung-Taek, once dubbed the second most powerful man in North Korea. He was demoted in 2004 and exiled to the countryside, but two years ago he was restored to an important post in the Workers Party.

Some predict Chang could play a regent role until a chosen heir can take over. Others believe he could be part of a collective leadership. Pak Haik-Soon from Sejong Institute says that leadership group could already be taking shape.

"A combination of key figures in the party and in the intelligence community and military will combine to support Kim Jong Il, which is happening now, and will support the new leader if Kim Jong Il is replaced," Pak says.

It is also unclear what the balance of power might be in a collective leadership — whether the Workers Party or the army would dominate. Analysts disagree on this issue. Some, such as Choi Jin-Wook from the Korea Institute for National Unification, believe friction between factions is likely or worse.

"It will be very unstable because during the last decade Kim Jong Il enjoyed divide and rule," Choi says. "North Korean elites do not trust each other, so nobody can control anybody when Kim Jong Il is in critical condition or dies. It's very likely political elites will fight each other over the leadership."

Others, however, believe a collective leadership is unlikely. Brian Myers from Dongseo University says his study of North Korean propaganda informs that belief.

"One of the most important tenets of North Korean propaganda has been that a nation needs a single strong leader in order to survive," Myers says. "A lot of the support that the North Korean regime has enjoyed over the decades has derived from fact that people feel strong emotional attachment to Leader — it's very unlikely people feel the same support for a collective body of people."

No one really has a clue what will happen after Kim Jong Il, and one irony of the speculation thrown up by reports of his illness is that for all his brinksmanship and eccentricity, he may start to look like a more attractive negotiating partner, given the alternative.

"If we think about all kinds of complexities, unpredictability and instability of the power succession process," Paik Hak-Soon says, "Kim Jong Il may turn out to be the lesser evil."