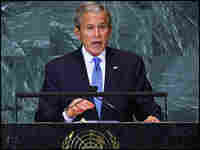 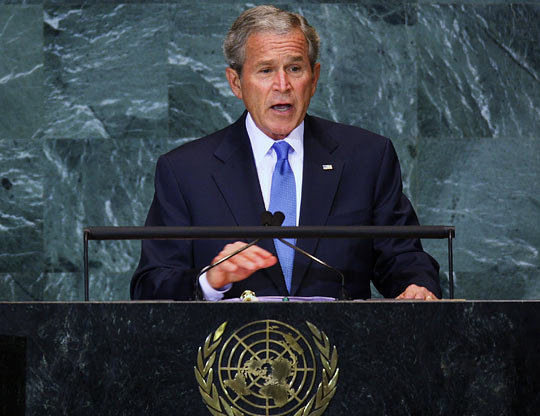 President Bush told the United Nations General Assembly on Tuesday that world leaders must continue to oppose nuclear proliferation, and he urged them to enforce sanctions against Iran and North Korea.

"We must remain vigilant against [nuclear] proliferation," Bush said in his final address to the annual assembly of world leaders. The president also said that Syria and Iran continued to sponsor terrorism, although he said the number of terrorists is fewer.

Foreign ministers from Britain, China, France, Germany, Russia and the U.S. plan to meet Thursday to discuss the possibility of drafting a fourth U.N. sanctions resolution against Iran over its nuclear program.

Previous rounds of sanctions and an offer of economic incentives have failed to deter Iran, which says it wants nuclear energy — not nuclear weapons. Iran's President Mahmoud Ahmadinejad will most likely address the issue when he speaks before the assembly in the afternoon.

On economic matters, Bush faced criticism from world leaders over the excesses of the global free enterprise system that Washington has espoused.

U.N. Secretary-General Ban Ki-moon said that the global financial crisis affects the U.N.'s development and anti-poverty programs. He and other world leaders said they fear the rich countries will cut aid to poor nations in an effort to deal with mounting financial problems at home.

Ban called for a new approach that will look at the markets more critically. "If ever there were a call to collective action, a call for global leadership, it is now," he said.

In his address, Bush said he realizes that other nations are watching how the United States deals with the financial meltdown that is shaking the global economy.

He said his administration is working with Congress to come to a quick agreement on a $700 billion bailout bill in addition to other "bold steps" aimed at stabilizing markets and keeping credit flowing.

French President Nicolas Sarkozy called for a summit of world leaders to address the financial crisis by the end of the year. He said the international community should unite to build a regulated system.

"Let us build together a regulated capitalism in which whole swaths of financial activity are not left to the sole judgment of market operators," he said.

Brazilian President Luiz Inacio Lula da Silva also called for a global solution to the crisis, which he blamed on "irresponsible" speculators.

"We must not allow the burden of the boundless greed of a few to be shouldered by all," Lula said.