Accessibility links
The Elements of E-Mail Style It's easy — maybe too easy — to click 'Send,' but that little button contains a world of pitfalls. Ever fire off an angry all-caps e-mail? Or use a devious little BCC, to your later chagrin? Authors David Shipley and Will Schwalbe offer a guide to e-mailing in the modern world.

Listen
The Elements of E-Mail Style

The Elements of E-Mail Style

It's easy — maybe too easy — to click 'Send,' but that little button contains a world of pitfalls. Ever fire off an angry all-caps e-mail? Or use a devious little BCC, to your later chagrin? Authors David Shipley and Will Schwalbe offer a guide to e-mailing in the modern world. 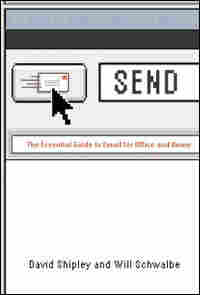 Seven Reasons to use the Telephone instead of Email

1) When you need to convey or discern emotion.

2) When you need to cut through the communication forest. Rememberthat meeting that had already taken up sixty-seven emails? In three phone calls, it's all set. (Date, time, location, roster of participants, who's having what for lunch.)

3) When you need to move fast. (Yes, it's true—even with cell phones, you can have trouble finding someone, or you can get stuck in voicemail. Still, the phone is faster and more reliable than anything else. When you've actually found someone, you know it.)

4) When you want a remote communication to be private. (Unless you're being recorded or speaking really loudly—and rudely!—in a public place.)

5) When you need to reach someone who doesn't check their email.

6) When you want people to be able immediately to engage and respond. The fact that we can talk at the same time and interrupt each other means that we can communicate the way we do in person. The phone allows our words and ideas to overlap, mingle, and amplify one another. Instant messaging and texting mimic this—but it's not the same.

7) When you need to send a harsh email, you can soften the blow (or distance yourself from it) by calling first with advance warning. ("I just wanted you to know that I'm going to be sending you a formal email letting you know that your bid wasn't successful. I value our relationship and hope that we can speak tomorrow, after you've read it.")

Why do we send so many electronic messages that we never should have written? Why do things spin out of control so quickly? Why don't people remember that email leaves an indelible electronic record? Why do we forget to compose our messages carefully so that people will know what we want without having to guess? We wrote this book to figure out why email has such a tendency to go awry–and to learn for ourselves how to email not just adequately but also well. Our Holy Grail: email that is so effective that it cuts down on email.

We don't hate email; we love it. We recognize that email has changed our lives in countless good ways. We just want to do it better. In fact, we think it's kind of remarkable that people manage on email as well as they do. After all, the odds are against us.

For starters, email hasn't been around all that long. Search for the term "email" in The New York Times archive for the mid-1980s and you're as likely to turn up "Thomas E. Mails" (author of The Pueblo Children of the Earth Mother) as you are references to electronic communication. It wasn't just that email was rarely used–it had barely been invented: before 1971, the @ sign was used mostly by accountants and merchants. There was no official Internet before 1983. The America Online we all know didn't exist prior to 1989.

That's a far cry from where we are today. Trillions of emails are sent every week. Office workers in the U.S. spend at least 25 percent of the day on email and countless hours on their handhelds. In 2009, the Bush administration is expected to turn over more than 100 million electronic messages to the National Archives. (The Clinton administration, by contrast, left behind 32 million emails in 2001.) All the data shows that email usage is continuing to grow.

A more detailed history of email lies ahead. The point we want to underscore here, however, is that this new technology took over our world in about a decade. Just as previous generations struggled to integrate first the telegraph and then the telephone into their lives, we're struggling to integrate email into ours. We're using it and overusing it and misusing it. Email is afflicted by the curse of the new.

Still, our difficulties with email can't simply be blamed on its youth. They also stem from email's unique character–or lack thereof.

If you don't consciously insert tone into an email, a kind of universal default tone won't automatically be conveyed. Instead, the message written without regard to tone becomes a blank screen onto which the reader projects his own fears, prejudices, and anxieties.

"Will you be late for the meeting?" is a simple question. But simply stated in an email, it can give rise to a huge variety of reactions. An employee who is on probation could see this as a stern warning. A model employee could interpret this as an insult, thinking, "I'm always on time, why would he now think I would show up late?" Or it could provoke confusion: "Why would I be late for the meeting? Is there something going on beforehand that I should know about?"

Email demands, then, that we figure out who we are in relation to the person we're writing and that we get our tone right from the outset–but this isn't as straightforward as it sounds. As Whitman reminded us, we contain multitudes. We are bosses and employees, mothers and daughters and sisters, scolders and comforters, encouragers and discouragers–and we constantly blend and change roles, even when we're talking to the same person.

Yes, all written communication is harder in this respect than interactions that take place in person, or even over the telephone: you cannot revise your message according to the reactions you're getting from the other party as you proceed. But email is the hardest written medium of all.

Letters, at least, give us clues that can help us divine their meaning. Personal stationery says something different from corporate and gives hints as to what is inside. As linguist Naomi Baron has noted, whenever we write a letter, we know we will be judged against centuries' worth of expectations. We remember that letters are permanent and so tend to use our best spelling and grammar.

Even other forms of electronic communication trip us up less frequently than email. Instant messaging and texting come close to replicating the real-time back-and-forth exchange we associate with in-person conversation–and they tend to take place (IM always) among people with whom you have some sort of association or affinity. They have a relatively consistent default tone–one of chatty casualness.

Email offers no such salvation because we email both for informal communication (making plans with friends, asking questions of peers) and for formal communication (applying for a job, pitching a prospective client). The distinctions get blurred, sometimes to dangerous effect.

We also email fast–inevitably too fast. We are in the position of having to get our messages right dozens or even hundreds of times a day, often under intense pressure, and for recipients whose needs, attitudes, and moods are constantly changing.

To complicate matters, the speed of email doesn't just make it easier to lose our cool–it actually eggs us on. On email, people aren't quite themselves: they are angrier, less sympathetic, less aware, more easily wounded, even more gossipy and duplicitous. Email has a tendency to encourage the lesser angels of our nature.

There's a reason for this. In a face-to-face (or voice-to voice) conversation, our emotional brains are constantly monitoring the reactions of the person to whom we're speaking. We discern what they like and what they don't like. Email, by contrast, doesn't provide a speedy real-time channel for feedback. Yet the technology somehow lulls us into thinking that such a channel exists. As Daniel Goleman, author of Social Intelligence, told us, emailing puts people, in neurological terms, in a state of disinhibition.(In our nonscientific terms, it's cluelessness.) When we're on email, the inhibiting circuits in our brain–which help us monitor and adapt to our audience's responses–have checked out.

The big problem, of course, is that we aren't always aware of this. And by the time we are? Well, we've probably already hit that Send key.