Accessibility links
Bush Makes Final Address As President To U.N. President Bush has made his final address to the U.N. General Assembly. He leaves behind many problems for the next U.S. president: unfinished wars in Afghanistan and Iraq and a tarnished image that has undercut America's moral authority in the world. 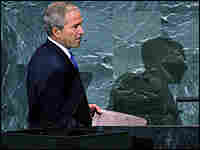 As President Bush prepares to give his last speech to the United Nations General Assembly, his shadow precedes him into the hall. Spencer Platt/Getty Images hide caption 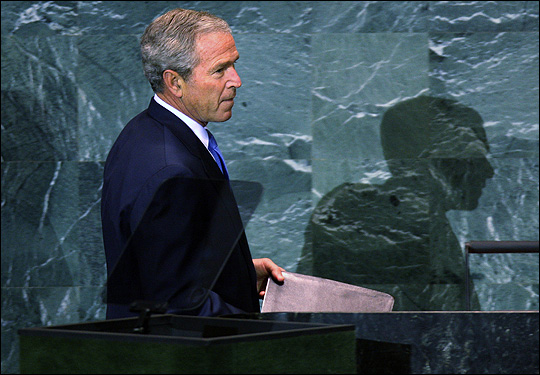 As President Bush prepares to give his last speech to the United Nations General Assembly, his shadow precedes him into the hall.

President Bush gave his final speech to the United Nations Tuesday, ending a tumultuous relationship complicated by the war in Iraq.

But his call for U.N. member states to work together to fight violent extremism was not echoed by other leaders who spoke. Most were more concerned about the financial crisis shaking America and what it could mean for poor nations around the world.

Bush said the U.N. is needed now more than ever to prevent acts of terror.

"Instead of only passing resolutions decrying terrorist attacks after they occur, we must cooperate more closely to keep terrorist attacks from happening in the first place," he said. "Instead of treating all forms of government as equally tolerable, we must actively challenge the conditions of tyranny and despair that allow terror and extremism to thrive."

He accused Syria and Iran of continuing to sponsor terrorism, but said they are growing more isolated.

Iran's President Mahmoud Ahmadinejad was in the room listening — smiling and once giving a thumbs-down to a neighbor — while U.S. and European diplomats worked behind the scenes on a new sanctions resolution aimed at keeping sensitive nuclear technology out of Iran's hands.

But while terrorism and non-proliferation are high on the Bush administration's agenda, it is the economy that is drawing more concern among other member states and U.N. Secretary-General Ban Ki Moon, who is already worried about high energy and food prices driving more people into poverty.

"The global financial crisis endangers all our work — financing foreign development, social spending in rich nations and poor," the secretary-general said. "If ever there were a call to collective action, a call for global leadership, it is now."

He called for a new approach with "less uncritical faith in the magic of markets."

Leaders from the developing world lined up with him. Brazil's leftist president, Luiz Inacio Lula de Silva, said that the boundless greed of a few should not be shouldered by all.

"Only decisive actions by governments, especially in countries where the crisis is focused, will be able to control the disorder that has spread through the world's financial sector with perverse impacts on the daily lives of millions of people," he said.

And French President Nicolas Sarkozy suggested that wealthy nations get together quickly to find ways to respond collectively. He called this the most serious financial crisis the world has experienced since the 1930s.

"Let us rebuild together a regulated capitalism, in which whole swaths of financial activity are not left to the sole judgment of market operators," Sarkozy said.

Bush tried to reassure world leaders that he has taken bold steps to restore stability and prevent the disorderly failure of major U.S. companies. He said he and Congress will work "in the urgent time frame required."