Accessibility links
Parents of the Autistic Weigh Lifelong Care Options At 19, Joey Mazzafro is no longer a child. But his severe autism means he will never be able to live independently. So his parents are trying to construct a support system for their son that will last after they are gone. 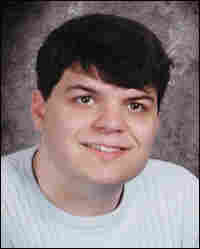 Joey Mazzafro, a 19-year-old with severe autism, will never be able to live independently. His parents, Joe and Maryjean Mazzafro, are working to construct a support system that will ensure their son will be cared for after they die. Courtesy of the Mazzafro Family hide caption

Autism begins in childhood, and it doesn't go away. Children with autism generally become adults with autism. Many will never live on their own. For their parents, that can mean responsibilities that last a lifetime — and beyond. In Maryland, one family is struggling to create a future for their son, Joey.

The scene could be straight out of an old TV show: A doting mom named Maryjean Mazzafro is making an after-school snack for her son, Joey. Today, it's pepperoni pizza.

Joey's school bus pulls up at the curb. He heads into the kitchen, and gulps down his snack.

Here's the part that's not made for TV: Joey is 19 years old. He is 5'10" and weighs about 200 pounds. He doesn't make eye contact much, and he didn't start using a toilet regularly until he was 8.

Pretty soon, the pizza is gone and Joey heads down to the basement, to relax and watch Peter Pan. For Joey, that means singing along with the same clip of the video over and over.

It's an odd life, but Maryjean says it is a good one for her son: He is safe, and he is loved. But she fears that it will not last.

In a couple of years, Joey will be too old to attend public school. Then, it will be up to his parents to arrange just about everything in his life. Maryjean says they are worried about how long they can do that.

"He's getting bigger and stronger," Maryjean says. "We're getting older, weaker, [and] things are going south rapidly. And I think my husband thinks, 'Oh my God, you know, my mother died of a heart attack at 57, and I'm 52.'"

There are institutions, of course. Some of the private ones can be quite fancy, but they are not like home.

There are also relatives; Joey has a sister, Bobbie, who is 21 and still in college.

"I certainly want him to be close to me," Bobbie says.

But she also hopes to someday get married and have kids.

"[Joey's] not a fan of babies," she says, "so it would be very, very difficult for him to be in a house with me if I have kids."

Maryjean agrees with her daughter.

"Autistic children move what doesn't belong there," she says, "so if it happens to be a baby..."

The challenges are daunting, but there are some people trained to help. The Mazzafros have been working with an estate planner named James Allotey. He's with Metlife and specializes in helping families with children like Joey.

The Mazzafros met Allotey through some workshops he gave near their home outside Baltimore. He says that for many parents, these talks offer the first glimpse of a way to take control of their child's future.

"The typical response when people attend our workshop is, 'Where have you been all my life?'" says Allotey.

Families often find their way to Allotey when their child is 17 or 18 years old.

"It becomes imperative that the parents do more for their adult children, because the government will be doing less once they're out of high school," he says.

Planning for the Future

After an hour of his Peter Pan video, Maryjean takes a walk with Joey around their neighborhood. She knows that Joey will always need supervision, but she is trying to make sure he also has some basic survival skills. She pauses on the corner to help Joey determine whether it is safe to cross the street. She hopes one day he will be able to cross safely by himself.

Around 6 p.m., Joey's father gets home. Joe Mazzafro used to be a captain in the Navy. He retired to the private sector so he would be able to do more for his son.

Joe says one of his fears is that his son's odd behavior will get him in trouble someday — when his parents are no longer around to help. What if Joey were on his own and had a run-in with a police officer?

"Joey's just going to look like — to him — a surly teenager," Joe says.

Despite his adult appearance, Joey is still in many ways a child, and always will be.

Joe knows his parental duties will carry on long after he and Maryjean have died; they have been planning for that day. A few years ago, they bought the house they are living in now. Maryjean liked it because she thought Joey would enjoy the pool in the backyard. Her husband identified it as a place where Joey could live long-term.

The Mazzafros are not typical; James Allotey says they are better off than most families and better prepared.

"Sometimes, families don't even have a guardian picked out for their children," Allotey says. "Then they have to worry about the physical environment itself. Then they need to worry about, well, 'Who is going to take care of the money?' OK, but maybe the most important thing is: Who is going to love him?"

The Mazzafros know that money and paid supervision are only part of the answer. Joe says that without a person who cares deeply for them, adults with autism can end up isolated in an institution, or even living on the street.

Joe says his attitude toward homeless people has changed now that he recognizes many of them are not so different from his son.

"I think a lot of [homeless] people are people like Joey who have not found, or could not live in, these institutional settings," Joe says.

The Mazzafros want to make sure their son has other options.