Accessibility links
Einstein: Relatively Speaking, a Complicated Life Biographer Walter Isaacson has turned his attention to the 20th century's scientific poster boy, whose family life was as difficult as his career was distinguished. Isaacson's book Einstein: His Life and Universe draws on newly released personal correspondence to create a portrait of the private as well as the public Albert Einstein. 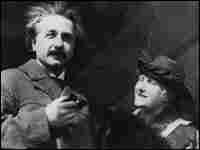 Two on a Party: Recently unveiled letters reveal that Albert Einstein, with wife Elsa on a trip to Egypt circa 1935, wasn't shy about telling her about his extramarital affairs. Topical Press Agency/Getty hide caption 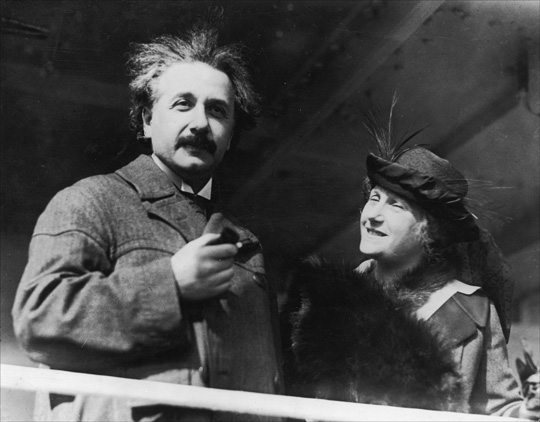 Two on a Party: Recently unveiled letters reveal that Albert Einstein, with wife Elsa on a trip to Egypt circa 1935, wasn't shy about telling her about his extramarital affairs.

Walter Isaacson, former managing editor of Time magazine and author of best-selling biographies of Benjamin Franklin and Henry Kissinger, has turned his attention to the 20th century's scientific poster boy: Albert Einstein, whose family life was as difficult as his career was distinguished.

Isaacson's book Einstein: His Life and Universe represents the first complete history of the theoretical-physicist-turned- refugee to draw upon all of Einstein's papers, many of which were unsealed last summer.

In what Booklist calls an "extraordinarily encompassing and profoundly affecting biography," Isaacson creates a portrait of the private as well as the public Einstein; he talks to guest host Dave Davies about the man he discovered in the course of his research. 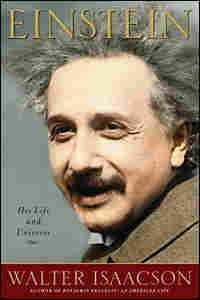 From Chapter 1: The Light-Beam Rider

Looking back at a century that will be remembered for its willingness to break classical bonds, and looking ahead to an era that seeks to nurture the creativity needed for scientific innovation, one person stands out as a paramount icon of our age: the kindly refugee from oppression whose wild halo of hair, twinkling eyes, engaging humanity, and extraordinary brilliance made his face a symbol and his name a synonym for genius. Albert Einstein was a locksmith blessed with imagination and guided by a faith in the harmony of nature's handiwork. His fascinating story, a testament to the connection between creativity and freedom, reflects the triumphs and tumults of the modern era.

Now that his archives have been completely opened, it is possible to explore how the private side of Einstein — his nonconformist personality, his instincts as a rebel, his curiosity, his passions and detachments — intertwined with his political side and his scientific side. Knowing about the man helps us understand the wellsprings of his science, and vice versa. Character and imagination and creative genius were all related, as if part of some unified field.

Despite his reputation for being aloof, he was in fact passionate in both his personal and scientific pursuits. At college he fell madly in love with the only woman in his physics class, a dark and intense Serbian named Mileva Maric. They had an illegitimate daughter, then married and had two sons. She served as a sounding board for his scientific ideas and helped to check the math in his papers, but eventually their relationship disintegrated. Einstein offered her a deal. He would win the Nobel Prize someday, he said; if she gave him a divorce, he would give her the prize money. She thought for a week and accepted. Because his theories were so radical, it was seventeen years after his miraculous outpouring from the patent office before he was awarded the prize and she collected.

Einstein's life and work reflected the disruption of societal certainties and moral absolutes in the modernist atmosphere of the early twentieth century. Imaginative nonconformity was in the air: Picasso, Joyce, Freud, Stravinsky, Schoenberg, and others were breaking conventional bonds. Charging this atmosphere was a conception of the universe in which space and time and the properties of particles seemed based on the vagaries of observations.

Einstein, however, was not truly a relativist, even though that is how he was interpreted by many, including some whose disdain was tinged by anti-Semitism. Beneath all of his theories, including relativity, was a quest for invariants, certainties, and absolutes. There was a harmonious reality underlying the laws of the universe, Einstein felt, and the goal of science was to discover it.

His quest began in 1895, when as a 16-year-old he imagined what it would be like to ride alongside a light beam. A decade later came his miracle year, described in the letter above, which laid the foundations for the two great advances of twentieth-century physics: relativity and quantum theory.

A decade after that, in 1915, he wrested from nature his crowning glory, one of the most beautiful theories in all of science, the general theory of relativity. As with the special theory, his thinking had evolved through thought experiments. Imagine being in an enclosed elevator accelerating up through space, he conjectured in one of them. The effects you'd feel would be indistinguishable from the experience of gravity.

Gravity, he figured, was a warping of space and time, and he came up with the equations that describe how the dynamics of this curvature result from the interplay between matter, motion, and energy. It can be described by using another thought experiment. Picture what it would be like to roll a bowling ball onto the two-dimensional surface of a trampoline. Then roll some billiard balls. They move toward the bowling ball not because it exerts some mysterious attraction but because of the way it curves the trampoline fabric. Now imagine this happening in the four-dimensional fabric of space and time. Okay, it's not easy, but that's why we're no Einstein and he was.

The exact midpoint of his career came a decade after that, in 1925, and it was a turning point. The quantum revolution he had helped to launch was being transformed into a new mechanics that was based on uncertainties and probabilities. He made his last great contributions to quantum mechanics that year but, simultaneously, began to resist it. He would spend the next three decades, ending with some equations scribbled while on his deathbed in 1955, stubbornly criticizing what he regarded as the incompleteness of quantum mechanics while attempting to subsume it into a unified field theory.

Both during his thirty years as a revolutionary and his subsequent thirty years as a resister, Einstein remained consistent in his willingness to be a serenely amused loner who was comfortable not conforming. Independent in his thinking, he was driven by an imagination that broke from the confines of conventional wisdom. He was that odd breed, a reverential rebel, and he was guided by a faith, which he wore lightly and with a twinkle in his eye, in a God who would not play dice by allowing things to happen by chance.

Einstein's nonconformist streak was evident in his personality and politics as well. Although he subscribed to socialist ideals, he was too much of an individualist to be comfortable with excessive state control or centralized authority. His impudent instincts, which served him so well as a young scientist, made him allergic to nationalism, militarism, and anything that smacked of a herd mentality. And until Hitler caused him to revise his geopolitical equations, he was an instinctive pacifist who celebrated resistance to war.

His tale encompasses the vast sweep of modern science, from the infinitesimal to the infinite, from the emission of photons to the expansion of the cosmos. A century after his great triumphs, we are still living in Einstein's universe, one defined on the macro scale by his theory of relativity and on the micro scale by a quantum mechanics that has proven durable even as it remains disconcerting.

His fingerprints are all over today's technologies. Photoelectric cells and lasers, nuclear power and fiber optics, space travel, and even semiconductors all trace back to his theories. He signed the letter to Franklin Roosevelt warning that it may be possible to build an atom bomb, and the letters of his famed equation relating energy to mass hover in our minds when we picture the resulting mushroom cloud.

Einstein's launch into fame, which occurred when measurements made during a 1919 eclipse confirmed his prediction of how much gravity bends light, coincided with, and contributed to, the birth of a new celebrity age. He became a scientific supernova and humanist icon, one of the most famous faces on the planet. The public earnestly puzzled over his theories, elevated him into a cult of genius, and canonized him as a secular saint.

If he did not have that electrified halo of hair and those piercing eyes, would he still have become science's preeminent poster boy? Suppose, as a thought experiment, that he had looked like a Max Planck or a Niels Bohr. Would he have remained in their reputational orbit, that of a mere scientific genius? Or would he still have made the leap into the pantheon inhabited by Aristotle, Galileo, and Newton?

The latter, I believe, is the case. His work had a very personal character, a stamp that made it recognizably his, the way a Picasso is recognizably a Picasso. He made imaginative leaps and discerned great principles through thought experiments rather than by methodical inductions based on experimental data. The theories that resulted were at times astonishing, mysterious, and counterintuitive, yet they contained notions that could capture the popular imagination: the relativity of space and time, E=mc2, the bending of light beams, and the warping of space.

Adding to his aura was his simple humanity. His inner security was tempered by the humility that comes from being awed by nature. He could be detached and aloof from those close to him, but toward mankind in general he exuded a true kindness and gentle compassion.

Yet for all of his popular appeal and surface accessibility, Einstein also came to symbolize the perception that modern physics was something that ordinary laymen could not comprehend, "the province of priest-like experts," in the words of Harvard professor Dudley Herschbach. It was not always thus. Galileo and Newton were both great geniuses, but their mechanical cause-and-effect explanation of the world was something that most thoughtful folks could grasp. In the eighteenth century of Benjamin Franklin and the nineteenth century of Thomas Edison, an educated person could feel some familiarity with science and even dabble in it as an amateur.

A popular feel for scientific endeavors should, if possible, be restored given the needs of the twenty-first century. This does not mean that every literature major should take a watered-down physics course or that a corporate lawyer should stay abreast of quantum mechanics. Rather, it means that an appreciation for the methods of science is a useful asset for a responsible citizenry. What science teaches us, very significantly, is the correlation between factual evidence and general theories, something well illustrated in Einstein's life. 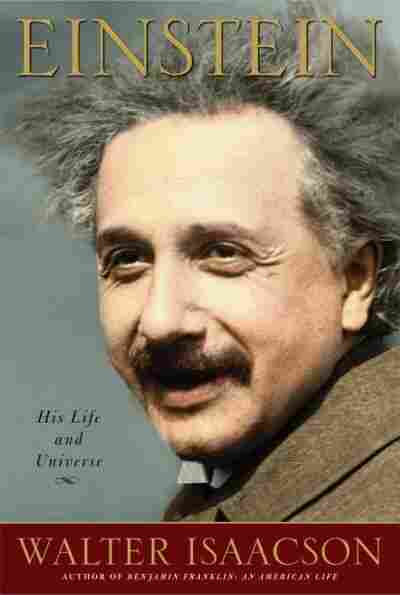 His Life And Universe