Half of the People 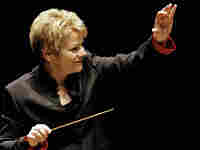 Marin Alsop was a Leonard Bernstein protege. With his Mass, she has championed her mentor's most controversial piece. Grant Leighton hide caption

Leonard Bernstein, for me, was the greatest risk-taker in 20th-century classical music. He thrived on conflict, and this is nowhere more evident than in his most controversial composition, Mass. 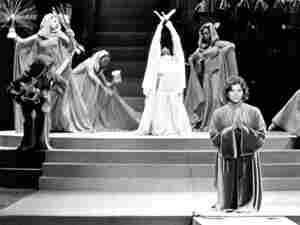 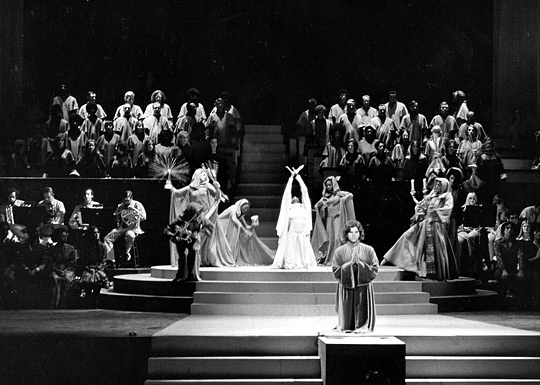 Bernstein composed the piece, on commission, to memorialize John F. Kennedy, America's first Catholic president. The occasion was the grand opening of the John F. Kennedy Center for the Performing Arts in Washington, D.C., in 1971.

Bernstein chose the structure of the Roman Catholic Mass, complete with a celebrant playing the central role. But this was a far cry from your ordinary Mass. Bernstein used the traditional Mass as a framework on which to hang all of his beliefs and questions. The music embraces Broadway and opera, rock ballads and blues, with a narrative that blends Hebrew and Latin texts.

Provocative and innovative to some, appalling to others, Mass is first and foremost a celebration of human faith, but it also questions the relevance of ceremonial rituals and immutable "truths" in an increasingly faithless modern world. Audiences leapt to their feet at the premiere, reacting to a work that felt so anti-establishment and so real.

To me, Mass contains the essence of Bernstein as a complex man and artist. Sure, the music is intoxicating, but beneath the showiness on the surface is a profound statement of faith. Bernstein was a nimble composer. He moved comfortably between high art and pop culture, not confined by stylistic boundaries. This was long before "crossover" became trendy.

Today, 37 years after its world premiere, Mass seems even more vital and relevant. Political volatility, an unpopular war seemingly without end, and our ongoing struggle as individuals to find faith and spirituality in contemporary society — this was the backdrop for Bernstein's portrayal of a modern-day crisis of faith. And while the music and the text may have less shock value to our contemporary ears, the message of Mass has enduring significance.

I'm proud to be conducting this defining work of Bernstein's career with the Baltimore Symphony in October, celebrating the life and legacy of my friend and mentor in what would have been Bernstein's 90th birthday year.

When I was 9 years old, I saw Bernstein conduct at one of his New York Philharmonic Young People's Concerts. That moment convinced me that conducting was the only thing in the world that I wanted to do. That alone would have been enough of a gift; but when I was 31, he took me under his wing and imparted to me the heart and soul of the craft.

Bernstein always told me that a composer spends his entire life writing the same piece, trying to answer the same unanswerable questions. Mass was his journey in search of an answer for all of society, then and now.

Marin Alsop is the music director of the Baltimore Symphony Orchestra. She's the conductor laureate of the Colorado Symphony and conductor emeritus of the Bournemouth Symphony.