Accessibility links
Sen. Shelby Against Current Rescue Package Members of the Senate Banking Committee heard Tuesday from Treasury Secretary Henry Paulson and Fed Chairman Ben Bernanke. Senator Richard Shelby of Alabama, the ranking Republican on the committee, says he won't vote for the plan the way it stands now. He believes it will have to be reconfigured to pass because there are too many unanswered questions.

Members of the Senate Banking Committee heard Tuesday from Treasury Secretary Henry Paulson and Fed Chairman Ben Bernanke. Senator Richard Shelby of Alabama, the ranking Republican on the committee, says he won't vote for the plan the way it stands now. He tells Steve Inskeep that he believes it will have to be reconfigured to pass because there are too many unanswered questions.

Why Congress Objects To The Bailout Plan 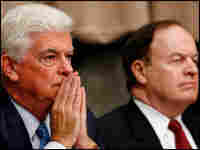 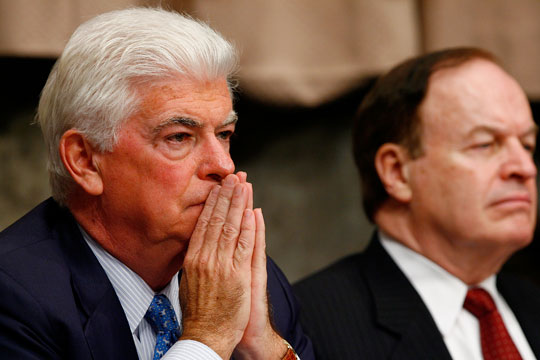 The outrage was palpable Tuesday as the Senate Banking Committee grilled Treasury Secretary Henry Paulson and Federal Reserve Chairman Ben Bernanke on the details of their $700 billion plan to bail out Wall Street with taxpayer funds. But lawmakers are hardly the only ones questioning whether the plan will work. Here's a look at some of the objections being raised on and off Capitol Hill.

Jon Macey, a professor and deputy dean of Yale Law School, says the bill contains the largest transfer of power from Congress to the administration that he has ever seen. Macey says Congress is handing over more power than it did in granting the executive branch leeway in the Patriot Act, and more powers than when authorizing combat through the war powers clause. He says the move amounts to a sidelining of Congress.

Senate Banking Committee Chairman Christopher Dodd, a Democrat from Connecticut, on Tuesday called the language in the plan "so troubling" and said it "cannot last" as part of the legislation.

It Represents A Fundamental Shift In The Way The U.S. Economy Works: The Bush administration's plan to bail out the nation's financial institutions represents an unprecedented intervention in free markets. If the Wall Street bailout is adopted, Republican Sen. Jim Bunning of Kentucky said last week, "the free market for all intents and purposes is dead in America."

A fundamental principle of free-market capitalism is that investors take on big risks to reap big rewards — but they also assume any losses that occur. The government's plan would radically alter that model, leaving profits private while making losses public.

It's Not The Only Viable Option For Fixing This Mess: In a nutshell, the Bush administration's plan would authorize up to $700 billion to let Treasury buy up bad mortgages from financial institutions. With these toxic assets off the books for firms, lenders would once again be willing to lend and the money would start flowing freely through the markets, the theory goes. Objections to the plan have come from both sides of the aisle — and from academics and economists who say it amounts to a huge handout to Wall Street without necessarily fixing the problem.

Many economists have proposed alternatives and alterations to the administration's proposal, some of which have been taken up by lawmakers. Details of the plan are still being negotiated, but here are some of the key points of contention:

Equity stakes: Rather than simply buying up bad loans and letting taxpayers assume all the risk, why not take shares in the financial firms in exchange, so that taxpayers could also participate in any potential profits? Banking Committee Chairman Dodd has proposed "contingency shares" that would only be issued if losses are realized on the assets bought up from a firm. In Tuesday's hearing, Paulson rejected the idea of equity shares, saying it would make the bailout program "ineffective" — though he didn't offer details on why that would be the case.

Valuing assets: There are already buyers for these toxic assets out there — they just aren't willing to buy them at prices that financial institutions find palatable. (In some cases, selling at those prices would make firms insolvent.) Many critics argue that the fundamental problem is that the financial markets lack capital, so the only way the government's plan will work is if the Treasury overpays for the assets; otherwise, why not just let investors buy them up?

So, how to price these assets? Technically, assets are only worth what a buyer is willing to pay for them. If no one wants to buy mortgage-backed securities, then right now they are worthless — but that doesn't mean they will always be worthless. Paulson has suggested that one way to set prices would be through what's known as a reverse auction, the goal of which is to drive prices down, rather than up.

But some economists note that reverse auctions work best when the assets being auctioned off are essentially identical. That's not the case with mortgage-backed securities: Some of them may have plenty of healthy, payment-producing mortgages in them, while others may be full of defaulted loans. If the government simply buys the securities with the lowest price, it may end up with $700 billion worth of the worst loans, critics say.

Executive-pay limits: Some lawmakers want any company that participates in the bailout to agree to slash the pay of its executives. After all, they say, those who created the mortgage mess shouldn't be allowed to profit from the bailout. But Paulson has resisted this idea. He argues that pay cuts would discourage firms from using the program and would force thousands of firms to review their executive compensation before participating, a time-consuming process.

Lawmakers Are Being Urged To Act While Staring At The Barrel Of A Gun: Congress is being asked to enact a fundamental restructuring of the U.S. economy — in one week. That's not a lot of time for lawmakers to weigh their options and the repercussions of their actions. In private meetings on the Hill, Paulson and Bernanke have warned lawmakers about the dire consequences of not acting — but these economic Doomsday scenarios have not been spelled out to the public.

Democratic Sen. Jon Tester of Montana told Paulson as much on Tuesday: "I fully feel the urgency ... But the truth is that we have to be given the time to do this right, or it's not going to work and we'll be back here next year or in two years asking for another $700 billion or more."

With additional reporting by Laura Conaway and Adam Davidson.