Accessibility links
Chowders Lighten Up If you think of chowder as heavy, cold-weather fare, think again. The word describes any thick, rich soup containing chunks of food, and they often have few ingredients, which makes them a perfect way to enjoy springtime's bounty. 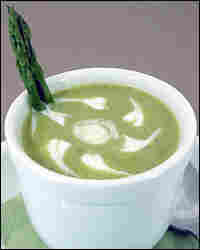 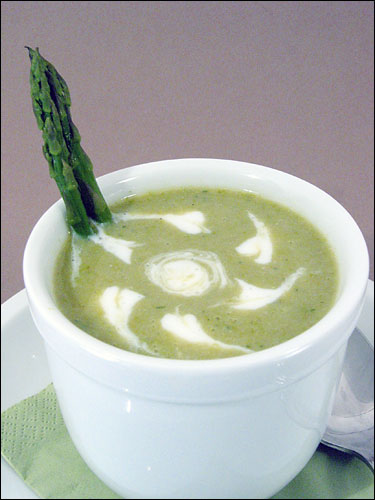 The vegetables of spring, such as asparagus, wild mushrooms and new potatoes, make perfect centerpieces for chowders.

Chowder? In the spring? Why not?

Most of us think of chowders as heavy fare, suitable for hunkering down over — face bathed in steam and fragrance — while a nor'easter rages outside. In fact, that is exactly how American chowder started in the fishing camps of New England.

But there is no real reason chowders should be limited to a particular season. The word, actually, can be applied to any thick, rich soup containing chunks of food. (I also think, despite the claims of some Manhattanites, that chowder is typified by the inclusion of milk or cream, which automatically provides richness.)

Given such a simple definition, chowders can take advantage of whatever the season offers. Potatoes and cheese are good choices in the winter. Hard squashes like acorn and butternut make delightful fall chowders. A couple of years ago, I had an insanely good tomato chowder in August, and fresh corn chowder is hard to beat.

In spring, beets make a delicious, colorful chowder usually called borscht. Spring also offers asparagus, wild mushrooms and new potatoes. And given the season's notorious unpredictability, heartier chowders that warm your bones still may find a welcome place at the table on days when a cold snap catches you by surprise — as it did in some parts of the country last week.

The origin of the word "chowder" is somewhat ambiguous. Most authorities, including the Oxford English Dictionary, assert it originates from the French term faire la chaudiere, which literally means "make the cauldron," and more accurately, "make something in a cauldron." The theory is that Breton fishermen brought the term from France to Nova Scotia.

Others claim the word is from the Old English word jowter, which refers to a fish peddler.

"Think of [chowder's] parentage in terms of place and all confusion falls away," New England food writer John Thorne says in his book Serious Pig. "Chowder is what you eat ... when you can't afford anything else." He has defined the soup's cultural context.

The first chowders were based on seafood: miscellaneous fish, cod, oysters, shrimp, crab, clam and even lobster (once a poor-man's food). Until the 20th century, seafood of all sorts was cheap and plentiful in New England, and chowders were made of whatever was in the day's catch or could be collected on the shores.

Because of the ubiquity of clams — and their ready accessibility to anyone, fisherman or not — New England clam chowder became the archetype. It is a lusciously thick, creamy broth with chunks of clam, potato and onion.

From its beginnings in New England, chowder spread westward across the continent, and was modified and adapted along the way. Potato chowder, corn chowder and potato-corn chowder are the most common variants, but chowders made of mixed vegetables, kale and spinach have also popped up.

Chicken chowder (usually mixed with corn, potatoes or both) also is common. And when chowder reached the West Coast, salmon chowders became popular. One of my favorite chowder variations is cheddar chowder, which is made by cooking bacon, browning onions in the bacon fat with some flour, then heating cream and milk, and melting sharp cheddar into the mix.

Most of the New England clam chowders I've eaten have been either too thin or thickened with a roux, which can give chowder a gravy-like character. I prefer a soup with the consistency of half and half.

An old chowder-head taught me to put oyster crackers in a plastic bag, pound them into fine crumbs with a beer bottle, and use them to thicken the chowder. This works beautifully with clam chowder. In the recipes below, only the Cajun shrimp chowder uses a roux.

Unlike many soups, chowders have few ingredients, so there is no place for subtlety. Chowder should step up to you and look you squarely in the eye with no hesitancy or hidden agenda.

And because there are so few components, they should be the best and freshest you can find. Spring, then, is a perfect time for chowder. You can't hide poor ingredients in these simple bowls of honest fare. 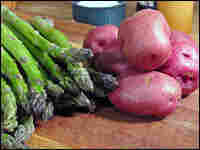 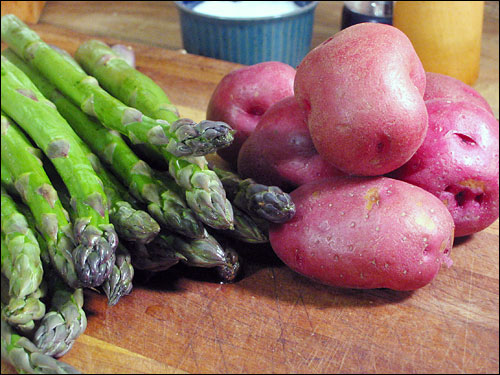 Chefs are notoriously frugal. In part, this is an effort to control food costs by minimizing waste — but it's not just a matter of money. Some things that you might consider waste actually contain a lot of flavor — such as shrimp shells and the woody ends of asparagus plants.

The lower portion of an asparagus stem is packed with fibers, strings that are difficult to chew and digest. When you trim or break these off, stuff them in a 1-gallon zippered freezer bag and freeze them.

If you love asparagus as much as I do, by the end of asparagus season, the bag will be crammed with stems, which you can use to make an asparagus-flavored stock. You can use the stock to make asparagus chowder, and I've used it to make a sauce for chicken.

Shrimp shells are another inedible with a lot of flavor. As with asparagus, whenever I peel raw shrimp, I freeze the shells and heads, if I can get them. When I have a gallon bag packed with shells I make stock by combining the shells with an onion, carrot, celery stalk and a bay leaf. Simmer these ingredients in 6 cups water for an hour, then strain and discard solids.

Freeze the stock in small zippered bags in 1-cup measures. They can be used any time seafood stock is needed (as in the Cajun shrimp chowder below).

This is a cold chowder, although you can certainly serve it warm. If serving cold, you'll need several hours of refrigeration time. The great thing about this chowder is that it uses an entire season's woody asparagus ends (see sidebar). If you haven't been saving your woody ends, substitute 1 1/2 pounds of fresh asparagus, but you'll still want to discard the solids after making the stock because you've cooked all the goodness out of the asparagus.

This is a perfect salute to the end of the season, and a nice beginning to the chilled vegetable soups of summer. If you wish, you can run the chowder through a blender and make it a bisque.

Put woody ends, onion quarters and potatoes in a soup pot with chicken stock, and bring to a vigorous simmer. Cook for 30 minutes.

Strain and discard asparagus and onion solids, but keep the potatoes and mash thoroughly with a bit of the stock to loosen them up. Reserve potatoes.

Return soup base to stove over medium heat, add leeks and bring to simmer. Add cut-up asparagus and cook until just done, about 5 minutes. Remove from heat and add savory, pepper, buttermilk, mashed potato, lemon juice and salt to taste. Allow to cool, then refrigerate until chilled, about 4 hours.

Taste and adjust seasonings before serving. 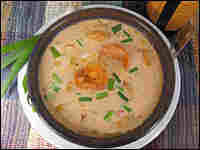 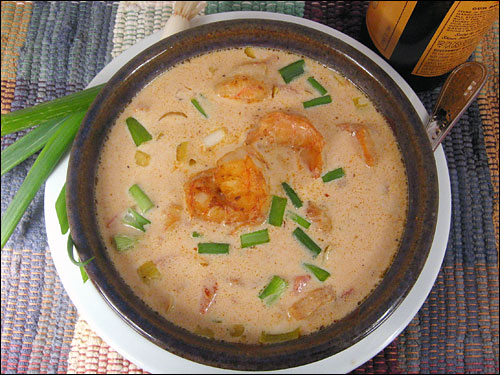 I first had shrimp chowder in New Orleans in a little hole-in-the-wall a friend took me to. This recipe includes the Cajun trinity: onion, celery and bell pepper. I substitute leeks for the onions and use a red bell pepper instead of green because the sweetness of the ripe pepper complements the shrimp better.

1 pound shrimp, peeled (reserve shells and heads, if you have them, for stock)

1 large leek, white part only, cut into half rounds (about 3/4 cup)

1 cup half and half

Toss shrimp with 1 teaspoon Cajun seasoning in a small bowl.

Heat a 12-inch saute pan over medium heat. Add butter and swirl to melt. Add shrimp and cook for about 1 1/2 minutes, turn over and cook another minute. The shrimp should be opaque, but not quite cooked through. Remove from heat.

Bring shrimp stock or clam juice to a boil in a small saucepan, add shrimp shells (and heads if you have them), reduce heat to medium-low and simmer for 30 minutes. Strain out shrimp shells and heads, and discard.

Heat oil in a large soup pot over medium-low heat. Add leeks, celery and bell pepper, and sweat for five minutes. Add garlic and cook another minute. Stir in flour and cook, stirring frequently to prevent burning, for 3 minutes. Whisk in clam juice; be careful, it will thicken quickly.

Stir in half and half and tomato paste. Bring to a light simmer, add shrimp and simmer 1 more minute. 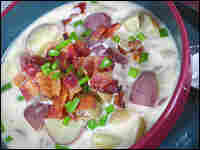 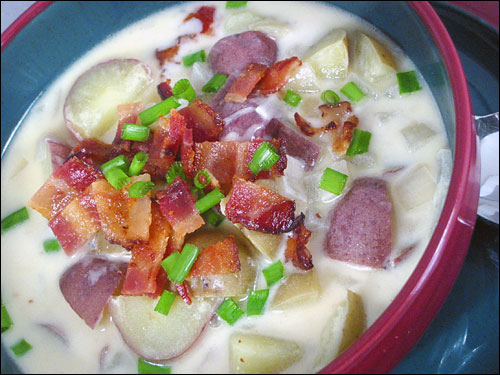 This is an old favorite with a history nearly as long as that of chowder itself. And although it makes a hearty winter dish, it is also a wonderful way of highlighting the deep, earthy flavors of fresh spring potatoes. Hit your farmers market and find those delightful little jewels, 3/4 to 1 1/4 inches in diameter. However you scrub them, you'll still taste the earth they were born in, and that's the way a potato should taste. There's a reason the French call them pommes de terre, or apples of the earth.

Additional salt and pepper to taste

In a large soup pot, cook bacon over medium-low heat until semi-crisp. Drain bacon, chop coarsely and reserve for garnish. Pour off all but 2 tablespoons of grease.

Add diced onion and cook until it begins to brown. Increase heat to high, add a bit of chicken broth and deglaze the pot. Add remaining chicken broth and bring to a boil, reduce heat to medium, add potatoes and salt, and simmer until potatoes are tender, about 10 minutes.

Remove 1 cup of potatoes and mash thoroughly with a bit of the stock to loosen them up, then stir back in along with the heavy cream and mustard, and return to a simmer.