Accessibility links
'Dexter' Returns, And The Suspense Is Murderous TV's most charming serial killer is back for a third season on Showtime. With new murders, new dangers and new characters, TV critic David Bianculli says the new season is a real thrill. 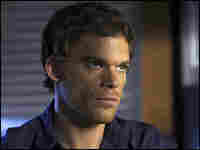 Boondock saint: Forensic blood-spatter analyst Dexter Morgan (Michael C. Hall) only kills the killers who escape the police force he works for — until this season, that is. Dan Littlejohn/Showtime hide caption 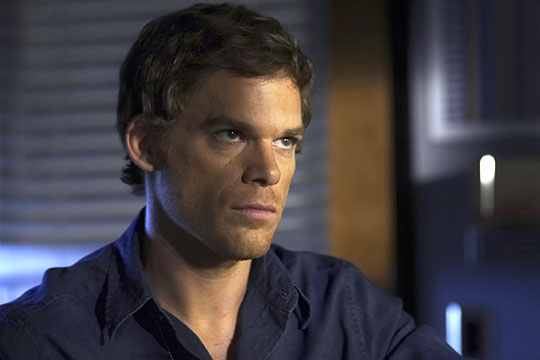 Boondock saint: Forensic blood-spatter analyst Dexter Morgan (Michael C. Hall) only kills the killers who escape the police force he works for — until this season, that is. 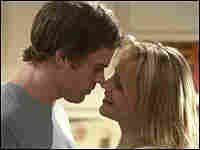 Dexter's relationship with single mom Rita Bennet (Julie Benz) isn't the only territory where boundaries will shift in Season 3. His police-officer sister will be back on his trail, too. Peter Iovino/Showtime hide caption 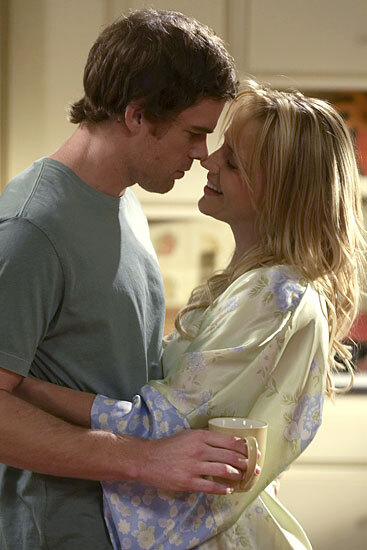 Dexter's relationship with single mom Rita Bennet (Julie Benz) isn't the only territory where boundaries will shift in Season 3. His police-officer sister will be back on his trail, too.

If any one TV show ends up benefiting the most from last season's writers' strike, it may be Dexter. The show, in which Michael C. Hall plays a serial killer good-guy who hunts down and slaughters serial-killer bad guys, is the highest-rated drama series in the history of Showtime — but that's still only somewhere between 1 million and 2 million viewers.

When CBS repeated Season 1 of Dexter to help fill its prime time hours during the strike, those broadcasts of Dexter drew about 8 million viewers weekly — a great advertisement for people to subscribe to Showtime.

Another great promotion is the recently released DVD set of Season 2, allowing new converts to get up to speed.

However you get there, get there — and fast. Season 3 of Dexter starts Sunday, and almost instantly sets up the kind of nonstop TV tension familiar to fans of The Shield.

But first, the new season starts with a false sense of serenity. At work, where he's a blood-spatter expert for the Miami police force, Dexter is handing out doughnuts and feeling safe. Off duty, Dexter spends time with his girlfriend and her kids, faking a normal relationship as best he can, every scene bathed in happy sunlight or the afterglow of passionate sex.

Except something goes wrong, and Dexter kills someone else instead. That someone turns out to be the brother of the district attorney, played by new season-long guest star Jimmy Smits.

This sudden death — the first unplanned murder Dexter has committed — sets everything in a frenzied motion. One cop on the force, Dexter's foster-sister Debra (Jennifer Carpenter), is handed the case, so she sets out on the trail of the killer, unaware that she's hunting her own brother.

The district attorney launches an investigation of his own, and Dexter has to stay ahead of both of them and tie up some loose ends. Tie them up, and maybe kill them.

And yet this isn't Dexter's only big issue this season. His father issues come back to haunt him, big time, in ways that are best kept a surprise.

But in juggling all of this, Dexter is struggling with his feelings — and he usually doesn't have them. This time, though, he has some guilt, and some anxiety, and even a taste of what other people might call ... happiness.

Hall portrays all of this magnificently. Dexter almost always puts up a false mask — at work, in bed — and Hall, with his subtle but telling expressions and body language, lets us see through the cracks. We hear his true thoughts as narration, but the only time we see the real Dexter, it seems, is when he's trapped another killer and is about to take his life.

This is a TV character worth embracing? Most definitely. And he's not alone. The entire Miami precinct is filled with characters that are well fleshed-out and have issues and ambitions of their own. This season, an Internal Affairs officer begins sniffing around — another page from the playbook of The Shield — and that looks to be a great subplot, too.

I know this is the official fall premiere week, when the broadcast networks are trying to get attention by rolling out many of their new and returning shows. But this week, for me, the best hour of first-run TV is on cable's Showtime, with Dexter. As lean-forward-in-your-seat TV dramas go, it's a real killer.