Accessibility links
A Graceful Triumph in Muted, Beautiful Shades Up! is the great misunderstood R.E.M. album, a noirish cycle filled with unsettling songs and "environments" that are brooding worlds away from the group's jangle-pop hits. Heard on its own, apart from the rest of R.E.M.'s output, it emerges as a graceful studio exploration. 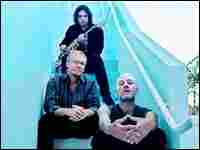 For its first album without drummer Bill Berry, R.E.M. made a shadowy, oft-misunderstood work of genius. hide caption 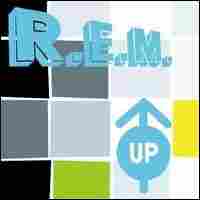 You're in the Air

In a long career like that of the Athens rock band R.E.M., a "transitional" album can wind up looking like a momentary lapse, a lost weekend in the scheme of things. One such artifact — Up!, the group's first disc after drummer Bill Berry left in 1997 — did not get lost. It had its moment on rock radio, and it drew tons of press attention. It didn't, however, get an entirely fair hearing with the R.E.M. faithful: A typical review among the 400 or so on Amazon dismisses it as the group's "unsuccessful" attempt to forge a new identity.

Up! is the great misunderstood R.E.M. album, a noirish cycle filled with unsettling songs and "environments" that are brooding worlds away from the group's jangle-pop hits. Heard on its own, apart from the rest of R.E.M.'s output, it emerges as a graceful studio exploration in muted and beautiful shades, a decades-removed descendent of Pet Sounds that's way more out of time than Out of Time.

When they went into the studio to record Up!, the remaining members of R.E.M. — vocalist Michael Stipe, guitarist Peter Buck and bassist Mike Mills — didn't attempt to directly "solve" the drummer problem. Instead, they sought different rhythmic anchors for each piece. Some involve a drum machine. Others, like the shadowy "Suspicion" (audio), utilize marimba and other hand percussion instruments beneath enveloping guitar drones. The intimacy of the beats throws a different spotlight on the melodies: At times on the Brian Wilson-inspired lushness of "You're in the Air" (audio), Stipe's perpetually ascending line feels like the only thing driving the music forward.

There are a few moments (notably "Daysleeper") when R.E.M. veers closer to its trademark sound. But these seem out of place within the delicate vibe of Up!, which mostly sustains its mood of whispery understatement — epitomized by the vividly rendered courtroom drama "Diminished" (audio) — from start to finish, a triumph in itself. Perhaps not surprisingly, R.E.M. went back to a more direct, less opaque sound on subsequent projects. These are plenty engaging and sometimes even great. But they don't approach the pure sonic grandeur and imagination on display here.