Accessibility links
A Lifeline For College Students With Depression Johns Hopkins senior Juliana Kerrest has struggled with mental illness since her early teens. In college, she went so far as to plan her suicide. One thought that stopped her: Her work with the support group Active Minds could help others suffering from mental illness.

Listen
A Lifeline For College Students With Depression

Juliana Kerrest, 22, a senior at Johns Hopkins University in Baltimore, is dealing with all of the pressure of normal college life while battling mental illness. David Gilkey/NPR hide caption 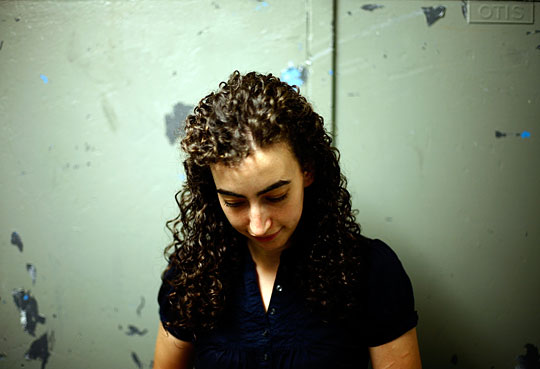 Juliana Kerrest, 22, a senior at Johns Hopkins University in Baltimore, is dealing with all of the pressure of normal college life while battling mental illness. 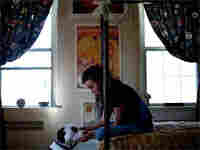 Kerrest says the responsibility of having to care for her pit bull, Caramel, has helped her through some pretty rough times. David Gilkey/NPR hide caption 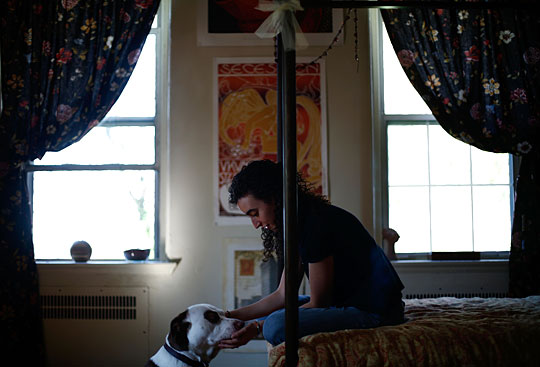 Kerrest says the responsibility of having to care for her pit bull, Caramel, has helped her through some pretty rough times.

It's important for anyone to do their homework in researching a college or university before accepting, says Dr. Richard Kadison, chief of Mental Health Services at Harvard University Health Services and author of College of the Overwhelmed. But for students with mental illness, he recommends they add the following to their questions for prospective schools:

— How does the college counseling center deal with problems such as depression or bipolar disorder?

— What resources are available for students who have or develop problems such as anxiety, depression, eating disorders, obsessive compulsive disorder or bipolar disorder?

— Are there 24-hour services available through the campus counseling center?

— Is there phone or on-site access to care at night and on weekends? If not, where are referrals made if a problem occurs, for example, on a Saturday night?

— What additional support services are in place? Are there residence advisers in the dormitory who are trained to identify possible problems and make referrals to local mental health resources?

Once you're on campus, there are a few ways you can help ease the transition and stay healthy at the same time. Kadison recommends:

Do not change your medication or therapy regimen. Sometimes, people think going off to college means a fresh start, and they can stop taking their medications and quit therapy. Beginning college is a transition that can be very stressful, so making any dramatic change in support systems is not a good idea.

Develop a local support network. Once you become aware of a mental health problem, make sure you have someone at or close by school who can help you monitor your situation over time and give you feedback. Make contact with a counselor, therapist or trusted adult who understands your mental health concerns and is a good listener. Find someone local who can coordinate care with clinicians at home. Don't worry alone.

Stay healthy. This means getting more than seven hours of sleep. Inadequate sleep makes you more susceptible to depression, mania, infection (because your immune system is compromised) as well as poor academic performance. "All-nighters" generally backfire.

Eat well and exercise. One important study shows that exercise works as well as anti-depressant medications for people with mild to moderate depression.

The emotional and intellectual challenges of college can knock students off balance. One group is especially at risk: students with mental illnesses. The illnesses are isolating, and the students may be far from the support of their family.

Students with depression, bipolar disease or schizophrenia have to find their own way through. That's what 22-year-old college senior Juliana Kerrest has done, with the help of a group called Active Minds.

At the start of the fall semester at Johns Hopkins University, Kerrest was anchoring a corner booth, one of about 250 crowded onto the floor of the gym and filled with students trying to attract others to their clubs.

Kerrest, delicately pretty with a fine-boned face and wildly curly brown hair, was offering candy to get people to listen to her spiel. Her club, Active Minds, offers movies, scream fests, speakers and, occasionally, free pizza.

The point of the club is to inform students about mental illness and de-stigmatize it.

Calling out to students about her club was not something she would have predicted she would be doing the previous spring. Back then, she had had enough of the crushing depressive episodes that periodically floored her.

She had hoarded antidepressants and painkillers over the years. But she couldn't just take them — there was her pit bull, Caramel, to worry about.

So Kerrest devised a plan. She'd check into the hotel next door, where they'd be sure to find her when they came to clean the room, and they'd see her note asking someone to feed and walk the dog.

She checked the hotel's reservation information on the Web.

Her actions were the result of a long struggle.

"I started self-injuring when I was 13. Cutting, initially, and hitting, and I tried burning and things like that," Kerrest says.

Kerrest managed to graduate from high school and get into Johns Hopkins. But the depressive episodes continued.

"It's like suffocation, kind of, and it's this very vivid drowning," she says. "But it's like slow — and you just want to stop it and take a deep breath, but everything is very thick and heavy, and your brain doesn't seem to be working right."

One of the worst parts about it was the loneliness. "To be so alone in such a darkness is horrible," she says.

At first, her friends would come by and knock on her dorm-room door to see if she wanted to go out.

"And I wouldn't answer, and I would just be lying there in the dark. But knowing they would come and knock on the door just made me feel a little better," she says.

But not better enough. In November of her freshman year, on the advice of her therapist, she took a medical leave.

Not The Only One

And Kerrest got to thinking — she couldn't be the only student suffering from a mental illness.

College mental health expert Richard Kadison of Harvard University says she's right. The stress of the transition to college can bring out depression and other problems. In addition, he says, "more people with diagnoses are going to college because they get treated earlier, and with treatment people are able to get to college, students who never would have been able to get to college in the past."

When she came back to school, she talked to school counselor Clare King, who told her about Active Minds. It was a club where students with mental illness could feel comfortable, and where they and other students could learn more about mental illness.

Kerrest and a friend started a chapter at Hopkins in the spring of 2006. The group kept her busy, but the depression came back. That's what had her planning her suicide and checking the availability of rooms at the hotel next door.

What undid her plan was concern about who would take care of her dog. That started her strategizing, and that slowed her down enough to recognize what she was doing and ask for help. She called King, who talked her out of it.

What's held her together is her quiet determination, the knowledge she's gained over the years about her own illness, and being involved with Active Minds.

"It's using this very big negative in my life and turning into something positive," Kerrest says. "Instead of thinking about mental illness because I just cut myself or I'm suicidal, I'm thinking about how many freshmen are out there."

Today, the loneliness isn't as bad as it once was, Kerrest says. And when she graduates this coming May, she hopes the leadership and organizational skills she's picked up will help her get a job with an international human rights group.