Accessibility links
Kansas City Mayor's Wife Causes A Stir Gloria Squitiro, wife of Kansas City, Mo., Mayor Mark Funkhouser, says that after 30 years together, she knows how her husband thinks. So she set up shop in City Hall and offered to answer questions when he's busy. But the City Council wants her out.

Update: The day this story aired, Ed Wolf, chief of staff to Mayor Mark Funkhouser, resigned his post. Wolf is expected to be deposed in a sexual and racial harassment lawsuit against the mayor's wife, Gloria Squitiro.

Kansas City Mayor Mark Funkhouser vetoed an ordinance that would ban his wife, Gloria Squitiro, from volunteering in his office. Funkhouser says he wants Squitiro by his side and he doesn't "give a flat damn who cares." Frank Morris for NPR hide caption 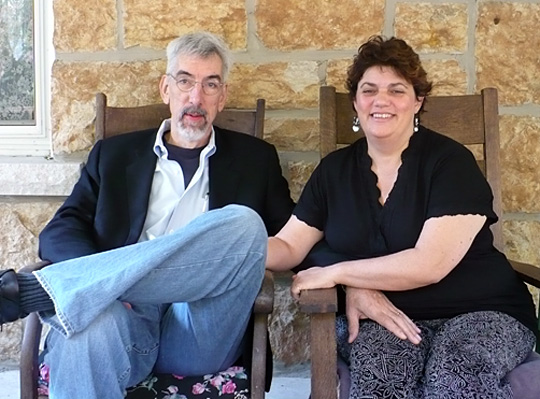 Kansas City Mayor Mark Funkhouser vetoed an ordinance that would ban his wife, Gloria Squitiro, from volunteering in his office. Funkhouser says he wants Squitiro by his side and he doesn't "give a flat damn who cares."

Talk of a delicate medical exam may not be the usual Christmas-letter fodder, but that didn't stop Gloria Squitiro, Kansas City Mayor Mark Funkhouser's wife, from dishing — in blunt detail and with frank humor — about her husband's procedure in her December 2007 note to family and friends. In January, The Kansas City Star posted the letter on its political blog. Read the letter.

Kansas City, Mo., has done something perhaps no other city has: It passed an ordinance to keep the mayor's wife from volunteering in his office.

Mayor Mark Funkhouser responded with the first veto in the city's history.

"I know what I need. And I choose to have my wife beside me. And I don't give a flat damn who cares," Funkhouser says of Gloria Squitiro, his wife of 30 years.

At first blush, Funkhouser and Squitiro seem kind of an odd couple. He's extremely tall — 6 foot 8 inches — bony and gruff. He can come off as cold and socially stiff — like Spock from Star Trek, only gray-haired and even more stern.

Squitiro describes herself as a "feisty, tiny, little Italian broad." She's open, effusive and earthy. Before jumping into politics last year, she had been a birthing coach who has worked with more than 500 couples.

When Funkhouser ran for mayor, Squitiro jumped in to manage — and humanize — the campaign. They beat the local business and political establishment.

And when Mayor Funkhouser moved into City Hall, Squitiro grabbed a tiny cubical right outside his door. Squitiro says that, after 30 years together, she knows exactly how Funkhouser thinks. So when people in the office have questions for the mayor — and he's busy — they can just ask her.

"I am the link, from him to them, them to him, him to people in the community," she says.

Yael Abouhalkah, a columnist with The Kansas City Star, says city residents don't need a gatekeeper in the mayor's office.

Abouhalkah backed Funkhouser in last year's election, but he didn't figure on Squitiro's huge role in the administration.

"She is irritating. She is outspoken. I think the mayor's even admitted that she can be brash. And, yes, some council members don't like that," Abouhalkah says.

Indeed, all 12 of them voted for an ordinance that would stop Squitiro from volunteering in the mayor's office.

"When a spouse or someone closely related to you is working for you, your judgment is clouded by your feelings for them, and so there's a lack of accountability," Marcason says.

Squitiro has done a few things that just might get a normal staffer canned. For one, she sent out a holiday letter that describes a medical exam Funkhouser underwent.

The letter turned up on blogs and, eventually, in major newspapers and magazines.

Then, Squitiro drew a lawsuit. The suit claims she's prone to overtly sexual and racist talk in the mayor's office. And that sparked the ordinance banning her type of volunteer service.

Council members say they have to protect the city. But Funkhouser considers it a power grab and a pointless diversion.

Funkhouser says he should be left alone to help fix the city's problems.

"People say 'When are you going to get the weeds cut?' People say the police response takes too long. My God, there were 20 murders in Kansas City in August, the worst month we've had in 20 years," Funkhouser says. "That's what people care about, and that's what I'm working on, and I want to be left alone to do that."

Members of the City Council say they, too, want to get past this. But they blame the whole flap on Funkhouser's intransigence. And say they're eager to get on with the city's real business.

But Funkhouser insists that ordinance or no, no matter who it annoys, Squitiro's sticking with him in the mayor's office.

That means the fight over Kansas City's first lady is likely to shift soon from City Hall to the court house.