Accessibility links
Chinese Milk Worker: Complaints Ignored For Years Milk contaminated with the industrial chemical melamine has sickened more than 50,000 children in China in recent weeks. But the practice of adulterating milk seems to have started far earlier than is being reported — and one whistle-blower has been trying to expose the dirty secrets of China's milk industry. 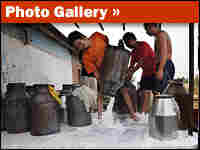 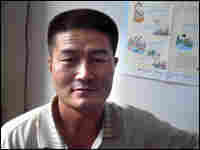 Whistle-blower Jiang Weisuo, a milk station operator, says chemicals were being added to milk in 2005. His attempts to expose the practice have resulted in huge financial losses and threats on his life, he says. Louisa Lim/NPR hide caption 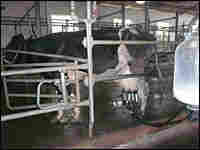 Milk collection stations like this one are at the heart of the scandal over contaminated milk. Louisa Lim/NPR hide caption

Milk contaminated with the industrial chemical melamine has sickened more than 50,000 children in China in recent weeks. But the practice of adulterating milk seems to have started far earlier than is being reported — and one whistle-blower has been trying to expose the dirty secrets of China's milk industry.

"People added whey powder, protein powder, fat powder. Some people added antibiotics as an antibacterial. They also added formaldehyde," says Jiang Weisuo, the milk station operator who first spoke out about the tainted milk. "My understanding is that what we called protein powder could be melamine, as that also boosts the protein. But I haven't looked into it."

Milk collection stations are at the heart of the scandal. They provide equipment to milk the cows and act as middlemen, selling the milk to bigger dairies. Jiang's station in rural Shaanxi province supplied one of China's biggest dairies, Yili, one of those found to be selling milk contaminated with melamine. He first realized something was amiss as long as three years ago, in 2005.

"Other people were adulterating their milk, and getting high prices for it. I was refusing to adulterate my milk and only getting very low prices," he says. "Adulterating milk means it makes more money, so insiders in the dairy can get kickbacks. I went five or six times to tell the dairy, but they never dealt with it adequately."

The problem started a long time ago, says one farmer who will only give his name as Wei, confirming the accusations.

Another farmer, Zhu Weigang, says ordinary farmers don't have the skills to doctor milk. "I'd never even heard of melamine before," he says.

Locals accuse the dairies of systematically abusing quality standards. A different station operator who wouldn't be interviewed on tape said the dairies demanded extremely high nutritional levels. If a station's milk didn't make the grade — for example, if its protein levels were too low — the dairies would deduct money.

So some station operators were forced to doctor their milk by economic pressures. Others took the step willingly, when they saw the price of milk rising. They realized they could water down their milk and use chemicals to cover it up. One estimate is that a kilo of milk could sell for four times its value after chemicals were added.

"There were reprisals," he says. "I'd report problems, and immediately people would stop buying milk. The economic pressures on me were huge. I lost tens of thousands of dollars. There was a price on my head, with people offering money to have me killed. In the end my family was shattered and my wife divorced me."

But Jiang was on a mission. Two years ago, he visited 12 provinces to investigate the dairy industry. He was on an influential television program and was featured in one of China's boldest newspapers last year.

Conspiracy Of Silence And Greed

As early as 2006, Jiang made several official complaints to the government department responsible for quality inspection — he says it initially made some arrests, but it stopped there.

When asked how the practice of doctoring milk could have continued for so long, he blames a conspiracy of silence, a lack of corporate oversight and untrammeled greed.

"These big dairies have amazing public relations machines, especially toward the media and the government. So the media wasn't allowed to report it," he says.

It's not exactly clear when unscrupulous operators started adding the toxic chemical melamine to milk. But it is clear that local authorities in Shaanxi — and at Yili dairy, where Jiang Weisuo took his complaints — have known for at least two years that milk was being contaminated. Jiang says he wishes he had done more.

"I feel very guilty," he says. "It's awful that so many children have had problems. I should have risked my life to go to Beijing to tell our leaders, and maybe things would have changed for the better."

Dairy farmers are now facing ruin. Demand for milk has plummeted. Many consumers will never trust Chinese milk again, one farmer says, his face lined with worry. Another begs, please don't report the truth. "If you do, it will kill the Chinese dairy industry entirely," he pleads anxiously.