Accessibility links
Football's A-11 Offense: An Illegal Procedure? A pair of high school football coaches in Northern California have developed a new offensive scheme that they say helps their small school compete with the big boys. It's called the A-11 offense, in which all 11 players on the field are potential receivers. But it's not legal — or welcome — everywhere. 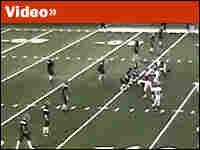 Players in the A-11 offense wear jerseys signifying that they could all be eligible to catch a pass.

But its radical formation isn't welcome at every level of football. A short guide to when it can be used:

Football games at tiny Piedmont High in the San Francisco Bay area have been getting lots of attention lately. The coaches there have developed a new offensive attack.

And depending whom you ask, their innovation is either offensive genius — or an offense to the game.

One of the team's recent games had every sign of a mismatch.

On one side there was Stockton's Stallworth Charter School, with some of the most athletic high school football players ever. On the other was Piedmont High, with a bunch of your typical suburban high school kids.

Yet there they were at halftime, tied at 27. In the locker room, Piedmont Coach Kurt Bryan rallied the troops.

"Don't you love going against the best?" Bryan asked his team.

"Right now, that team is stunned," Bryan told his players. "This game was supposed to be over. Over! We're it, man. We're it. They're stunned."

Stallworth was indeed stunned — by the A-11 offense, something football has never seen before, at any level.

Instead of everyone bunching up around the ball on the line of scrimmage, Piedmont's players spread out across the entire width of the field, in pods of three.

Several yards behind the middle pod, which includes a center and the ball, two quarterbacks wait for the snap — or, sometimes, a quarterback and a running back.

But that's not all, says Bryan.

"The A-11 offense stands for all 11 players potentially eligible," he said.

Normally, only five players are allowed to catch a forward pass on any given play — and they must wear jersey numbers in two ranges: 1 to 49, and 80 to 99.

The goal is to confuse the defense as much as possible, to give the offense every edge it can get. And opposing Coach Sam Fant said Piedmont did exactly that.

"It took us the whole first half, nearly, to try to figure out what the hell was going on."

At tiny Piedmont High, almost anyone can be a varsity athlete. So to compete with larger schools, Bryan and another coach came up with the A-11 — and found the jersey-number loophole in the rule book that made it legal.

Still, Bryan had his doubts before the first game using the formation last year.

"We told ourselves and our staff and our kids two things: Either we are gonna be an absolute joke and we're gonna get fired, or we're gonna do well and we're gonna help change football history in a good way," Bryan said.

He certainly didn't get fired. Piedmont won its final seven regular-season games last year, to make the playoffs after starting 0-2. Now, hundreds of schools around the country are using the A-11 as well. The coaches have a Web site, sell playbooks and DVDs online, and even run special clinics.

An Innovation Too Far?

The question of whether the A-11 offense is changing football for the better or worse depends on whom you ask.

"This is an unsporting act in terms of deception, which is not in accordance with the rule code or the intent and spirit of the great game," said Mark Dreibelbis, the supervisor of officials for the North Carolina High School Athletic Association.

He says there are other, better, more legal ways to level the playing field.

"The A-11 offense is taking an exception to the rule code" and using it on every down, Dreibelbis said.

So North Carolina and a handful of other state associations have banned the A-11. And by next season, the organization that sets high school rules nationally could do the same thing.

But Piedmont's Kurt Bryan says the A-11 shows how football is evolving.

"Ever since the forward pass came into play, the game has slowly become faster, more spread out, more athletic," Bryan said.

"We don't have a very big class, both in number and in size," George said, "but we've got a lot of skill players. I don't think it fits for everybody, but it works for us."

The second half of the game with Stallworth didn't work out as well for Piedmont. Their opponents made some adjustments, Piedmont made some mistakes — and the final score was 61-34.

But without the A-11 offense, the coaches said, it would've been a lot worse.

Now, the A-11 spread offense is, well, spreading — around the country, and even to a military school in Japan.