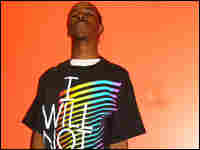 Youth Radio's Mark Anthony Waters says kids in his inner-city neighborhood are trading the "boring uniform of the street," for a style that used to be considered gay. Wilmer Tejada hide caption

Youth Radio's Mark Anthony Waters used to hear straight guys in his inner-city neighborhood whisper about his style on the bus. Now, they're copying his look, trading in their blue jeans, white shirts and Nikes for, "big shiny sunglasses, sparkling necklaces, tight-legged jeans and a cute shirt"- a style once considered gay in his neighborhood. He says that the trend is influenced by hip-hop stars like Pharrell, Kanye West and Cam'ron sporting the fashion-forward style on TV. Though the world of hip-hop fashion is obsessed with looking and acting tough, Waters finds that, "there is nothing tougher than being who you are, without apologizing."