Accessibility links
Amid Crisis At Home, A Debate On Foreign Policy The first presidential debate, which is set to focus on foreign policy, could tell us a lot about candidates McCain and Obama and their views on foreign policy and national security. It's all a matter of asking the right questions.

Amid Crisis At Home, A Debate On Foreign Policy

Amid Crisis At Home, A Debate On Foreign Policy 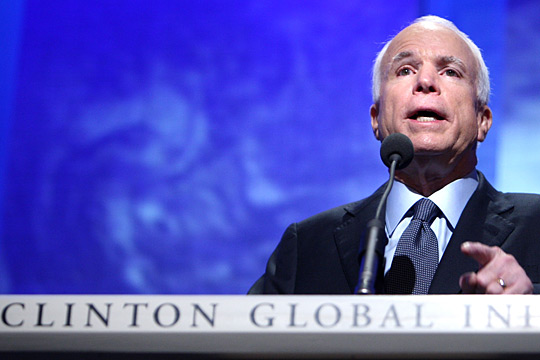 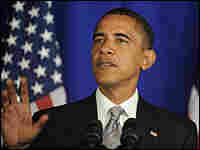 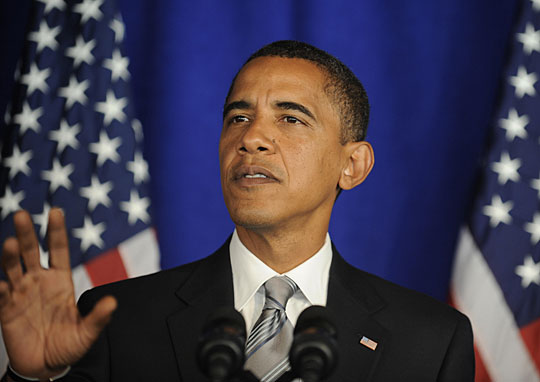 Barack Obama speaks during a press conference in Clearwater, Fla. on Sept. 24.

The fate of the presidential debate is in doubt as the candidates shift their attention to the nation's financial crisis.

But if it goes on as scheduled on Friday evening, Sen. John McCain and Sen. Barack Obama will have their first face-to-face chance to set apart their views on foreign policy and national security.

Each candidate has a long list of his positions on individual issues ranging from the war in Iraq to the future of NATO. Debate moderator Jim Lehrer might simply ask questions on a topic-by-topic basis as a way of contrasting the candidates' policies and styles.

But the demands of foreign policy have a way of changing fast, as shown by the Russia-Georgia conflict last month. Whoever wins the presidency is likely to find that the issues are interwoven in such complex ways that he can't pull any one strand without considering all the others.

And some experts argue that questions about specific current problems don't necessarily reveal whether a candidate has the experience and temperament to lead.

It's Not Just About Iraq

Back when it first became clear that Obama and McCain would be facing each other in the presidential race, most people thought their foreign policy differences would center on the war in Iraq. Recent events seem likely to broaden the debate.

McCain cited his support for the military "surge" in Iraq as a sign that he was strong on strategy. Obama emphasized his early opposition to the war and pledged to withdraw U.S. combat troops from Iraq at a pace that would have most of them out within 16 months of his taking office.

McCain has opposed any timetable for withdrawing troops, but he has suggested recently that if conditions warrant, he might reduce U.S. troop strength in Iraq by as much as half by the end of his first term in office.

Obama has long stressed that he believes that Iraq was a costly diversion from the real central front in the war on terrorism, Afghanistan. Both candidates have called for increasing U.S. troop strength there and pressing NATO allies to provide more forces as well.

The Russia-Georgia conflict brought up another set of issues regarding U.S. military power and the U.S. relationship with NATO. Should former Soviet republics such as Georgia and Ukraine be allowed to join NATO, and would the U.S. and its allies be willing and able to protect them if they are threatened?

This is where the issues start to intertwine in a way that makes any one of them very difficult to resolve without considering all the others, says George Friedman, CEO of the nonpartisan intelligence analysis company Stratfor. He says the candidates should be asked a compound question: "If you want to withdraw U.S. forces from Iraq at a reasonably slow pace, where will you get the troops to be effective in Afghanistan and to protect allies in the former Soviet Union?"

Friedman points out that the Soviet Union failed to pacify Afghanistan with 120,000 troops in the 1980s and says the candidates should be asked how many troops they think are necessary. Afghanistan is both bigger and more populous than Iraq.

Friedman also says the next president will have to deal with commitments to Georgia, regardless of whether it is allowed to join NATO. "Whatever the legalities are," he says, "the U.S. has made guarantees to Georgia. We need to watch very carefully what an American guarantee is worth."

Friedman says there is an answer to his compound question, "and that is a dramatic increase in our defense budget."

McCain has argued for building a larger and more capable U.S. military, but the need to bail out casualties of the financial market crisis is likely to constrain defense spending for either candidate.

Defense analyst Stephen Biddle says larger issues of defense and national security policy have been muted during this campaign. Biddle, a senior fellow at the Council on Foreign Relations, says he would like to hear the candidates talking about fundamental questions, such as: "With whom should we really be at war, here? What should our aims be? Do we really need a shining beacon of democracy in Iraq, or just stability?"

Biddle says he'd also like to hear candidates talking candidly about U.S. aims for national security. "Is the only acceptable goal the complete elimination of any terrorist threat against the American homeland? There's a tendency on the campaign trail to talk as though any degree of threat to America is unacceptable, and that's not realistic," he says.

"What I would like to see from both candidates," Biddle says, "is a willingness to adapt to changing conditions. Conditions have been changing rapidly in Iraq, Afghanistan and Pakistan. I'd like to see a discussion of how the three are related."

Iran, Israel And The Palestinians

Also linked to Iraq, Afghanistan and Pakistan is the question of Iran and its nuclear program. Both candidates regard Iran as a threat and say they would do everything in their power to keep it from acquiring nuclear weapons. Both support tougher economic sanctions against Iran and its leaders.

But Obama has said he would lead "tough and principled diplomacy" with Iranian leaders, while McCain has said he believes direct talks with Iran would be "fruitless." McCain says he would create "real-world pressures" to force Iran to change its ways.

Both candidates pledge strong support and aid to Israel. Obama says he'll make progress on the Israeli-Palestinian conflict a key diplomatic priority — with the goal of achieving a two-state solution. Both say they recognize Israel's right to self-defense, and McCain has taken a particularly hard line on the threat a nuclear-armed Iran could pose to the Jewish state.

Both candidates have said they would not negotiate with groups such as Hamas that advocate the destruction of Israel.

Both candidates have said the U.S. must engage with China. Both support U.S. alliances with Asian countries that are China's neighbors, including Japan and South Korea. Both say that China should adopt a flexible exchange rate for its currency that would make American goods more competitive in Chinese markets. Both have criticized China for its human-rights record and its relations with repressive governments in Sudan and Burma.

U.S. policy on North Korea may enter a new phase if North Korean leader Kim Jong Il is, as widely believed, incapacitated by a stroke. McCain has called North Korea "the foremost security challenge in Asia." He's been a critic of efforts to get the isolated communist state to dismantle its nuclear programs, ranging from the plan negotiated during the Clinton administration to the current Six-Party Talks.

Obama has also been impatient with the Six-Party Talks (comprising the U.S., China, Japan, Russia and North and South Korea). He has advocated bilateral negotiations with North Korea's leaders.

Not everyone agrees that the candidates' answers to questions on specific current issues are really that important. Richard Haass, the president of the Council on Foreign Relations, says that "the problem with asking about specific situations is that the candidate will give you briefing points or safe answers designed for campaigning."

"If they don't know the answers to some factual question, who cares?" Haass asks. "They can learn. Governing is not necessarily related to information. Life is not a game of Jeopardy."

Haass notes that the biggest challenges that presidents have had to deal with are crises, like the Sept. 11 attacks, that couldn't have been predicted. He says it would be more valuable to ask candidates about their assessments of historical events, such as the end of the Cold War.

"If a candidate thinks we won the Cold War because of our strength, or because of Soviet internal contradictions or weaknesses, or the unity of our allies," he says, "all those answers tell us something about them."

"The one thing we can find out," Haass says, "is what is the intellectual software they would bring to the job."