Accessibility links
New South African Leader Emerges in Power Shift In a matter of weeks, South African leader Thabo Mbeki was ousted and replaced by Kgalema Motlanthe, a relative newcomer. The change marks the biggest political upheaval in South Africa since the end of apartheid in 1994. 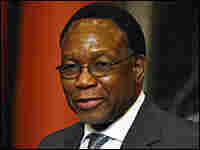 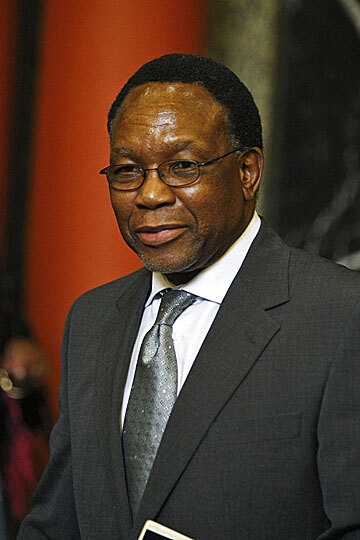 South Africa's newly elected president, Kgalema Motlanthe, leaves a special session of the National Assembly after being sworn in Thursday.

South Africa's parliament has chosen a new president — Kgalema Motlanthe — who will hold office until elections next year.

In a matter of weeks, the ruling African National Congress (ANC) engineered the ouster of former president Thabo Mbeki and made way for new leadership. The change marks the biggest political upheaval in South Africa since the end of apartheid in 1994 and reflects a power struggle within the party that many say has distracted the ANC for too long.

It all happened fast: Motlanthe became a member of parliament only about eight weeks ago. But Thursday, lawmakers elected this quiet and dependable favorite of the ruling ANC to South Africa's highest office. He had been hand-selected by ANC leader Jacob Zuma, who was eager to see Mbeki go. Motlanthe said he was humbled.

"I undertake this responsibility fully cognizant of the duties and responsibilities that are attached to this high office and the expectations the people of this nation rightly have of a head of state," Motlanthe said. "I thank you."

He, Zuma and Mbeki are now and forever joined in a political coming-of-age story for post-apartheid South Africa. In a nation dominated by one political party, this period will test whether the ANC can survive intact. Within the party's wide variety of constituents, rifts are now exposed between pro-Mbeki and pro-Zuma factions, and many South Africans are fed up.

"The country is crying out for resolute and strong leadership to reduce the level of anxiety currently felt by a great many of our people, who have been deeply unsettled by the governing party's internal power struggles," Seremane says.

Like all great rivalries, that of Mbeki and Zuma began with a great friendship.

"Jacob Zuma and Thabo Mbeki have spent most of their political lives as incredibly close comrades and friends," says Mark Gevisser, who wrote a biography of Mbeki and has now written a book on the nation's future after the leader. "And for most of Thabo Mbeki's career, Jacob Zuma has been his adjunct."

When Mbeki became president of South Africa in 1999, Zuma was his deputy. But as Zuma's presidential ambitions rose, Mbeki reportedly cooled. And when a Zuma ally was convicted for arranging bribes for Zuma in an arms deal, Mbeki fired his old friend from government.

Years later, Zuma's role in the deal is still unclear, but allegations of corruption have never dimmed his popularity in the ANC.

When a judge recently suggested that Mbeki had meddled in a pending corruption case against Zuma, that gave Zuma and the ANC the opportunity to act. They recalled Mbeki from the presidency.

Sheila Meintjes, who teaches political science in Johannesburg, calls the rivalry a "brutatwist," which in Afrikaans means "a fight between brothers."

"The Zuma faction believed strongly that there was a conspiracy against Zuma, preventing him from getting into the presidency," Meintjes says.

She says the ANC could have handled the situation better, but South Africa's democracy is in tact.

"I think we're going through a big learning curve as a country," Meintjes says. "But our constitution is not being challenged — it's being followed."

And yet, South Africa may never be the same — despite the ANC's assurances of unity, there is no telling whether the party will be able to repair itself. It could splinter, and biographer Gevisser says maybe that is a sign that South Africa is growing up.

"Between 1994 and now there's been a very clear continuity," Gevisser says. "One could always say I know what's going to happen next year. And we can't say that at the moment."

Shortly after taking office Thursday, Motlanthe got to work. He immediately announced his cabinet, which included a number of fresh names and some old popular ones.