Accessibility links
Election Enthusiasm Spurs Drive For Citizenship Nearly three times more people became U.S. citizens this week in Tucson, Ariz., than at the previous citizenship ceremony in July. Why the surge? This year's election may be the answer. 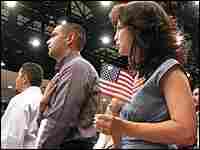 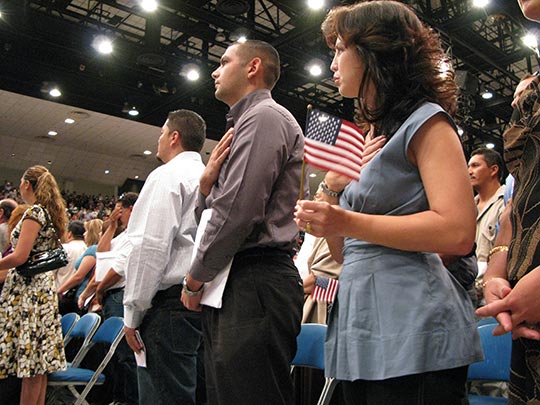 This week, 39,000 people became U.S. citizens at eight sites around the country. Nearly 2,000 of them swore allegiance in Tucson, Ariz. — almost three times more than at Tucson's most recent citizenship ceremony in July.

Hailing from 40 different countries, some have been legal residents for just over the 5-year minimum required to apply for citizenship; some have been here for decades. But all decided to make it official Tuesday.

Why now? The answers were surprisingly simple.

"I realize the importance of being able to vote," said Allison Roberts, who immigrated from the U.K.

Edna Sandoval from Nogales, Mexico, agreed: "I could've become a citizen 15 years ago, but I guess it's an election year, and it's very important for me."

"If you want to vote in this presidential election, you must register today," announced F. Ann Rodriguez. As the Pima County recorder, Rodriguez is responsible for registering voters. The deadline to register for the November election is less than two weeks away, and early voting begins next week. Rodriguez had county workers registering the new citizens in a room next to where the ceremony was held.

The message was nonpartisan: "Just Vote," the signs said. Wilma Valero, a new U.S. citizen from Mexico, said she feels newly empowered to do just that.

"It's not so much because it's only my vote, but for me it's very important because sometimes one vote is the difference."

Arizona has more Republicans than Democrats, but the gap is narrowing. In the most recent reporting period, Democrats registered 6,000 more new voters than Republicans. But the largest gain was among independents.

In the last election, Census Bureau figures show that about 10 percent fewer naturalized citizens voted compared with native-born citizens. That figure may seem counterintuitive, based on the enthusiasm shown at this naturalization ceremony. So candidates up and down the ballot might want to get all these new voters while they're excited.