Accessibility links
Debate Watching Isn't Just For Politicos Three experts — a political science professor, a fashion writer and a TV critic — weigh in on what they'll be watching for in Friday's presidential debate. Opinions range from substance to style to wardrobe. Also: guidelines for a debate-watching drinking game.

Barack Obama and John McCain will face off on Friday at the University of Mississippi in their first presidential debate. AFP/Getty Images hide caption 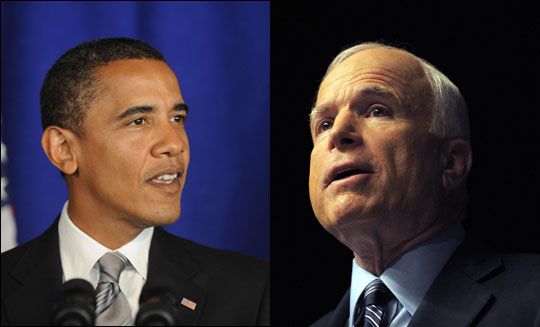 Barack Obama and John McCain will face off on Friday at the University of Mississippi in their first presidential debate.

All across the nation, the electorate is gearing up for the first presidential debate. And on the Internet, drinking games are popping up with some frequency. So take some lemons, make some lemonade and get ready to chug-a-lug. Here's an edited compilation of some of the prompts, with a few of our own sprinkled in.

Above all, drink responsibly. And be sure to save some lemonade for the Oct. 2 debate between Sarah Palin and Joe Biden.

Watching the presidential debates in America has become a national sport and a pastime. And that will undoubtedly be true for this year's first debate, scheduled for Friday night in Oxford, Miss.

Nearly everyone agrees that this is a critical election and the future of the country hangs in the balance. But not everyone concurs on how to watch the collision of the candidates or what to look for during the main event.

As with everything else in this country, when it comes to debate-watching possibilities, pluralism reigns. Many Web sites have proposed various drinking games.

At the Galapagos Art Space in Brooklyn, N.Y., guests are planning to strap on special glasses and experience the McCain-Obama exchange together — in special 3-D ChromaDepth technology, a stereoscopic system built appropriately on the colors red and blue. Eye-popping red and blue drinks will also be served.

Chili hounds are encouraged to eat pool-room chili and catch the spectacle on a jumbo TV at the nonpartisan debate-viewing party in Tom's Restaurant & Tavern in Phoenix. Arizona State University politicos have been invited to hang around afterward to moderate a discussion.

There are many ways to watch this debate — which is supposed to focus on foreign affairs and national security. We asked a few key people, via e-mail, exactly what they will be watching for. Here then is a Field Guide to Watching the Presidential Debate.

Larry J. Sabato teaches politics at the University of Virginia

Barack Obama's very simple task is to turn John McCain's first name from John to Bush. If the electorate sees McCain's election as Bush's third term, McCain is done for.

McCain has the tougher task. McCain must find opportunities to declare his independence from Bush. At the same time, he has to hammer home that Obama is untested, unready and unsteady for the Oval Office.

Unless Obama is completely incompetent in the first debate, he'll answer many of the foreign policy questions with an economic twist. In 1992, Bill Clinton answered questions about the weather by tying it to the economy. It's still the economy, stupid. McCain needs to talk about the dangerous world out there, with evil lurking everywhere — terrorism, the Russians, etc.

The independent variable is gaffes. All candidates make them, but only a few turn out to matter. Generally, gaffes matter when the mistake plays into the subtext of the candidate: He's old/angry [McCain], or inexperienced [Obama], or verbose [Biden], or uninformed [Palin]). The gaffe matters because the underlying subtext is true and damaging.

Robin Givhan writes about fashion at The Washington Post

I'd be curious to see if Obama is wearing a blue tie, which I think tends to make him look more like a businessman and less political. And at the moment that could be a good thing. I'd check for that flag pin on his lapel, which I think has been welded on by this point.

With McCain, I'd only be shocked if he didn't wear a red or blue tie. I'd be stunned if he wore a green tie for instance. I'd be curious to see if he wears a flag pin, since he usually doesn't since he has positioned himself as patriotism on two legs.

I'd check for weird makeup on McCain. He has those scars and he's pale, so I'd wonder if the campaign would worry about that.

Mary McNamara is a television critic at the Los Angeles Times

I will be watching to see how the candidates perform. Literally. This is the best opportunity they have to "cast" themselves as the type of president they think the American people will like best.

Both Obama and McCain are going in with image issues. Obama is considered by some to be too professorial, too distant, too "elitist" (though what this means when we're talking about people who are running for president continues to escape me).

Answers like "it's above my pay grade" (in a reference to an abortion-debate-baiting question about when life begins) may mark a sophisticated yet humble intellect, but they won't play well on national television. As such a young candidate he has always walked a fine line between appearing confident and arrogant; he needs to appear assured but not smug.

Obama owes the nomination to his rhetorical talent, to his ability to move people with his words and voice. I think many voters are curious to see how he does with the teleprompter off, especially if things get heated. He has played it pretty calm and cool, all things considered, but Americans like it when a candidate vents some authoritative anger. "You are no John Kennedy" — televised politics don't get better than that.

McCain has to deal with his age — will he make some easy Jeopardy flub like mistaking the Pakistani border countries or Spain's NATO status? Ronald Reagan could get away with looking a little scattered because he was handsome and he seemed so nice. McCain has neither of these things going for him — his campaign has been called out for unnecessary roughness and lying by everyone from Karl Rove to the ladies of The View.

The temper he has used in the past to show that he was an indignant maverick could make him seem simply querulous, never an attractive trait in a president. So while Obama might want to heat things up, McCain may try to cool them down.

The ratings for the last set of presidential debates were in the 60 millions and given the nature of the campaign, I would expect to see that this year. But this first one is on a Friday — the deadest air on TV — so we might see higher ratings for the second than the first, especially if there are any good YouTube moments on Friday.