Accessibility links
A New Contender For Earth's Oldest Rock It's hard to find rocks from the earliest days of the planet because the Earth's surface is constantly changing. But exposed bedrock on the eastern shore of the Hudson Bay in Quebec may be 4.3 billion years old. 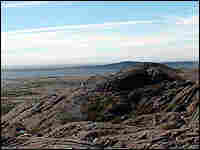 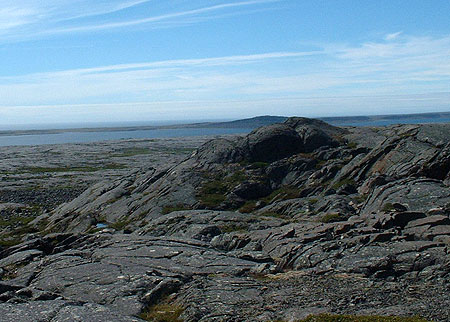 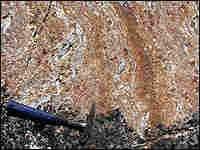 A close-up of the ancient rocks. Science/AAAS hide caption 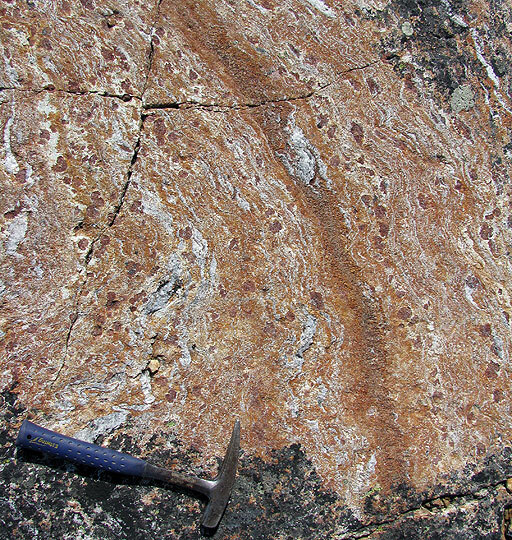 A close-up of the ancient rocks.

When geologist Jonathan O'Neil goes walking on some flat, exposed bedrock on the eastern shore of Hudson Bay in Quebec, he believes that he may be walking on the world's oldest rocks.

"When you actually walk on the rock, it's kind of special just to think, well, I could walk here 4.3 billion years ago and I probably would have walked on the same rocks," says O'Neil, a Ph.D. student at McGill University in Montreal.

The Earth is only around 4.6 billion years old. Scientists believe it started as a big, hot blob of molten metal and rock, and then began to cool and form a crust. Scientists would love to have samples of rock from those early days. But they're hard to find in part because the planet's surface is constantly changing.

Scientists have found isolated mineral grains called zircons that date back to 4.36 billion years ago, but the rock that was originally around these grains has eroded away. So until now, the oldest-known rock has been the Acasta Gneiss, an outcropping in Canada's Northwest Territories that's thought to be 4.03 billion years old. But O'Neil and his colleagues think their rock could be even more ancient.

Some scientists will question the claim, says O'Neil. "Of course there's going to be controversy," he says. "I'm expecting that."

In the past, scientists have established the age of ancient rocks by looking at the composition of zircons. But O'Neil says his rock didn't have any of those tiny mineral grains. So he and his colleagues used a technique previously used to establish the age of meteorites that looks at the rare elements neodymium and samarium. In their study in the journal Science, they concluded that the rocks could have formed 250 million years before any previously discovered rocks.

"The jury is still out," says Jeff Vervoort, a geologist with Washington State University in Pullman. "Truly, the data are equivocal."

He says the rocks themselves may be 4.28 billion years old, or they could be the product of a two-stage process: For example, they may be younger rocks that formed after a section of early crust separated from the underlying mantle layer at that earlier time.

Still, Vervoort says, "this is an exciting paper with some very nice data on some extremely interesting old rocks. This paper will undoubtedly spur interest in further work in this area, looking for additional evidence from Earth's earliest history."

John Valley, a geologist at the University of Wisconsin-Madison, says scientists have long expected to find rocks from this time period. "We've always been puzzled by our failure to find them. So the question then arises: Were the earliest rocks completely destroyed by some unusual process? Or do these early relics really exist and we just don't know how to recognize them?"

He says the method used in this study does look like it could be helpful for identifying sections of the Earth's early crust.

"Possibly, there are even rocks as old as 4.3 billion years," Valley says. "And if that's correct, then they may hold the key to timeless questions about the evolution of the Earth and possibly even the emergence of life."

He says that because life can exist only under certain conditions, finding the earliest rocks should help geologists understand when exactly the Earth became friendly enough for life to evolve.