Accessibility links
Even-Keeled Obama Built Image On Bridging Divides Barack Obama is cool and calm to John McCain's hot and fiery demeanor. Some see Obama as detached and aloof. Others see him as exhibiting strength and calmness in turbulent times. 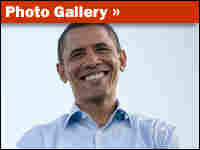 Barack Obama's temperament is famously unflappable. He has reacted with characteristic cool and caution to the Wall Street financial crisis, holding back at times while his rival charged ahead.

His campaign mantra is "No Drama Obama."

Top Obama strategist, David Axelrod, described a staff meeting after the campaign's crushing loss in the Ohio and Texas primaries:

"As he walked out the door, he turned around and said, 'You know, I'm not yelling at anybody here,'" Axelrod remembers. "'I could,' he said, 'after spending $20 million and losing two primaries.' He said, 'But I'm not.' And he laughed and walked out the door."

Political strategists have been looking at both candidates' temperaments going into Friday's first debate to try to guess how they will interact with one another.

Often, it sounds as though Obama's bid for the White House is based on his temperament.

"I think both by training and disposition. I understand where we need to take the country," he said on 60 Minutes last Sunday. "One of the things I'm good at is getting people in a room with a bunch of different ideas, who sometimes violently disagree with each other, and finding common ground, and a sense of common direction."

Obama has built his public image around his ability to bridge divisions — racial, ideological or generational. And that was his reputation, even at Harvard Law School, where he was the first black president of the Law Review.

"The early '90s on the Harvard Law School campus were fairly turbulent, fairly politicized. There was a lot of bitterness and political argument going on," said former classmate, Brad Berenson, who served on the review with Obama.

"He did not generally take sides in these disputes," said Berenson, a staunch conservative who went on to work in the White House for President Bush. "He cast himself more in the role of mediator and conciliator. He would make a decision when he had to, when someone had to break the tie. But he always tried to do it in a way that left people feeling as content and as fairly dealt with as possible."

Obama was always a negotiator, not a challenger. He wrote about this trait in his memoir, Dreams From My Father:

"People were satisfied so long as you are courteous and smiled and made no sudden moves," he wrote. "They were more than satisfied; they were relieved — such a pleasant surprise to find a well-mannered young black who didn't seem angry all the time."

"Part of the experience of dealing with race is learning sometimes that you have to put others at ease before you can engage on anything else," Patrick said. "[Obama] is so much about not being put in a box. It's not having people's predispositions or suppositions about who you are, what you think, how you'll behave so cloud the ability to actually engage with people. And I think that's a learned behavior, very broad-life experience, professional experience. He has adapted, and I think others in that so-called class of new black leaders have as well."

But for Obama, it wasn't just learned behavior. It's his natural personality.

His sister, Maya Soetoro Ng, says he is the same in private as he is in public.

"He is genuinely cool. He really doesn't see the utility of getting too worked up and finds it quite easy to stay even, which, as you might imagine as his younger sister, was terribly maddening," she said.

'Coolness' On The Campaign Trail

Clinton rode the backlash of sympathy over that cutting remark to victory in the New Hampshire primary, and now Obama's Republican opponents are trying to turn his effortless cool against him. They've run ads painting him as a too-cool-for-school celebrity and an elitist — someone who, as Republican vice presidential candidate Sarah Palin charged, condescended to small town voters when he called them bitter at a private fundraiser.

Princeton political scientist Fred Greenstein says that Obama's strengths are his "extraordinary fluency," including "his acuteness of mind, his capacity to handle subtleties."

"I think his weakness is that he seems to float above the fray," Greenstein adds. "It's almost as if, when the Republicans unleashed very hostile or unfair attacks on him, as if he kind of looked on that with clinical detachment at first. Like a botanist looking at some very unusual specimen."

The question of whether Obama's famous detachment is really a lack of toughness comes up often on the campaign trail. Voter Glenn Grasso asked Obama about it at a town meeting in New Hampshire this month.

"So for those of us that have given you our support and more importantly our money, when and how are you going to start fighting back against the attack ads and smear campaigns?" Grasso asked.

People close to Obama say it's a mistake to interpret his cerebral demeanor as a lack of passion. Instead, they say it masks an intense competitive instinct and a fierce drive.

"I have to explain to people, I'm skinny, but I'm tough," Obama told the audience at a campaign rally in Maryland earlier this year.

And then he did a little shadow box with his fists up.

In Oxford, Miss., on Friday, if his opponent shows up, Obama will get his wish to go one-on-one with McCain.

The story incorrectly stated that Obama was the first black editor of the Harvard Law Review. He was actually the Law Review's first black president.