Accessibility links
Philadelphia's Legendary Pipe Organ Is Restored The largest playable pipe organ in the world is in a department store in Philadelphia. In its heyday, the Wanamaker Organ could imitate the sounds of strings, horns, woodwinds and all kinds of bells and whistles.

The largest playable pipe organ in the world is in a department store in Philadelphia. In its heyday, the Wanamaker Organ could imitate the sounds of strings, horns, woodwinds and all kinds of bells and whistles. 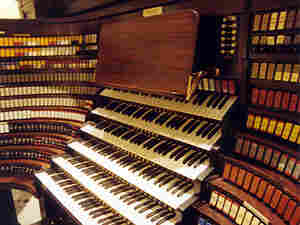 When you walk into a department store these days, the musical entertainment consists largely of Muzak. Well, not so at the Macy's in Philadelphia. That's where you can find the largest playable pipe organ in the world, the Wanamaker organ. And this weekend, it will get a musical assist from some friends, namely the Philadelphia Orchestra. Joel Rose has our story.

JOEL ROSE: Twice a day at noon and 7 p.m., what used to be Wanamaker's Department Store, is temporarily transformed into a concert hall.

ROSE: While customers shop for shoes and perfume on the ground floor, the sound of the Wanamaker organ fills the soaring seven-storey atrium of what's now a Macy's.

PETER RICHARD CONTE: I'm sitting at the world's largest playable musical instrument. There's about a thousand controls to my right and left. There are six keyboards that are sloped up so I can reach them.

ROSE: Organist Peter Richard Conte has manned the console of the Wanamaker organ for the past 20 years. Everyday, except Sunday, he weaves his way through racks of women's jackets on the second floor, unlocks the gate, and sits down in front of what, except for the keyboards, could be the cockpit of an airplane, there are so many buttons.

RICHARD CONTE: I'm an orchestral conductor, basically, and the little tabs, there are thousands of them, to my right and left, are orchestra players. So, I'm actually orchestrating as I go, turning on and off these tabs.

ROSE: Those tabs look kind of like dominoes. They're color-coded stops that control 28,000 pipes ranging in size from just a few inches to more than 32 feet.

ROSE: Retail magnate and music lover John Wanamaker heard this organ at the World's Fair in St. Louis in 1904 and bought it for his flagship store in Philadelphia. Famous organists came from all over the world to play it.

RAY BISWANGER: They had Leopold Stokowski and the Philadelphia Orchestra come in 1919.

ROSE: Ray Biswanger is president of the Friends of the Wanamaker Organ.

BISWANGER: Well, you know, 15,000 people came. The place was filled. It was a sensation.

ROSE: Sadly, there aren't any recordings of those collaborations which continued into the 1920s. But Biswanger says those concerts inspired conductor Leopold Stokowski to arrange organ works by Johann Sebastian Bach for orchestra. Stokowski and the Philadelphia orchestra played one of those arrangements in Walt Disney's "Fantasia."

ROSE: After John Wanamaker and his son, Rodman, died, the instrument gradually fell into disrepair, according to Curt Mangel. He's the official curator of the Wanamaker organ.

CURT MANGEL: When Rodman died, the bean counters took over. The instrument over many, many years started to decay. Things started not working.

ROSE: The store changed hands several times. What had once been a full-time organ staff of 30 was cut to two. And by the 1980s, Mangel says, only a quarter of the pipes sounded. He says the organ's comeback began during the '90s, when Lord and Taylor bought the store. But it really took off when Macy's came in two years ago. Jim Kenny is the store's general manager. He used to come hear the organ when he was a kid.

JIM KENNY: This instrument, to my customers, is what we call, wow. As soon as we saw it, we knew we had to make it better.

ROSE: Macy's won't say how much it spent restoring the instrument, but it has allowed the Friends of the Wanamaker Organ to set up a repair shop on one of the upper floors.

ROSE: Volunteer Peter Bachelder(ph) is tuning up the orchestral division, the last group of pipes to be added by the Wanamakers.

PETER BACHELDER: It was installed deep in the guts of the old organ and spoke right into a wall so it couldn't be heard, and so all this magnificent pipe work from the Kimble Company of 1928 was wasted.

ROSE: Now the pipes are facing out into the store. And on Saturday night, the Philadelphia orchestra will come back to perform here for the first time since 1928. Organ curator Curt Mangel says tastes have changed since then and so have many organs, but the Wanamaker has managed to survive, partly through benign neglect.

MANGEL: Where so many church organs have been destroyed by fashion because people whimsically changed their minds about what they liked in organs and what they didn't, fashion saved this organ, because the money from the clothing industry always kept the instrument intact. Artistically, we are stepping back in time every time you walk into the Grand Court and listen to the instrument, and hearing what our ancestors heard and dreamed of hearing as they were building it.

ROSE: Macy's has agreed to close the building for a day as part of its 150th anniversary celebration and to move the entire ladies' shoe department out of the way to make room for a thousand people to hear the orchestra. If they want to try on a pair of boots, though, they'll have to come back on Sunday. For NPR News, I'm Joel Rose in Philadelphia.