Accessibility links
How 'Suspended' Is McCain's Campaign? Republican presidential candidate John McCain said he would suspend his presidential campaign and return to Washington to help deal with the nation's financial crisis. What does "suspending" the campaign entail and what has McCain's campaign done?

Listen
How 'Suspended' Is McCain's Campaign?

Republican presidential candidate John McCain said he would suspend his presidential campaign and return to Washington to help deal with the nation's financial crisis. What does "suspending" the campaign entail and what has McCain's campaign done?

When Senator McCain announced yesterday that he would suspend his presidential campaign starting today, we wondered what does that suspension entail, and is it even possible for a major party nominee to stop running for president? Well, this morning, McCain attended, as scheduled, the Clinton Global Initiative in New York City, where he called for lawmakers to put politics aside while crafting the bailout plan. But McCain also worked in some favorite campaign themes, including his opposition to earmarks and a certain notorious bridge.

BLOCK: I would rather build a bridge to nowhere and put it square in the middle of Sedona, Arizona than take money from teachers and farmers and small business owners to line the pockets of the Wall Street crowd that got us here in the first place.

BLOCK: And then the senator flew to Washington. He got to his office about 25 minutes before negotiators for both parties announced what they called a fundamental agreement.

NORRIS: Meanwhile, McCain's campaign said it was pulling its campaign ads today, though some did still make it to air across the country. And what about fundraising? The campaign said McCain and vice presidential nominee Sarah Palin would not attend any such events for the Republican National Committee. But the RNC, which has been spending millions of dollars to help McCain, would not say whether it would suspend fundraising.

BLOCK: And McCain's campaign committee has not been raising money anyway, since he's been taking public financing since the convention. Also, tonight, Senator McCain will be interviewed on ABC, CBS, and NBC. 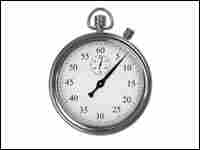 Republican Sen. John McCain decided to suspend his presidential campaign on Wednesday — and suggested that rival Democrat Barack Obama do the same -– until Congress can reach an agreement on how to tackle the bailout of the financial industry.

NPR's David Greene, who is traveling with the candidate, maps out when McCain arrived at that decision and what he has been doing since he halted his campaign activities.

8:15 a.m. McCain meets economic advisers and Wall Street executives to talk about the bailout at a meeting at the Hilton Hotel in Midtown Manhattan. McCain tells reporters that Sen. Harry Reid misspoke when he said McCain was supporting the bill.

8:30 a.m. Obama calls McCain to suggest a joint statement. The senators don't talk. McCain aides say McCain was busy with economic advisers and that they weren't aware what topic was on Obama's mind.

12:00 noon McCain motorcades to Morgan Library in New York to prep for the debate. Aides say the session was cut short and he spent time making calls about the bailout. McCain is becoming convinced that the bill will not pass as it stands.

2:30 p.m. McCain calls Obama, and the two men talk for the first time. Obama says he thought they had agreed on a joint statement and that the idea of suspending was being mulled over. During an interview with CBS News' Katie Couric, McCain says that he suggested both candidates suspend their campaigns and go to Washington.

2:40 p.m. McCain speaks to reporters in a ballroom in his New York hotel, using a teleprompter rather than his preferred method of speaking off the cuff when talking to the media. McCain says he will suspend the campaign and says that he has instructed his staff to work with debate organizers on a postponement.

3:45 p.m. Senior McCain aides come to speak with reporters. Mark Salter stresses that McCain's statement had no hint of a partisan attack and no posturing. Salter says McCain could still debate Friday, if a deal is reached quickly in Washington.

Late afternoon McCain cancels an appearance on the Late Show With David Letterman, but he tapes an interview with Couric that airs in the evening.

8:30 p.m. The two campaigns release a joint written statement: "This is a time to rise above politics for the good of the country. We cannot risk an economic catastrophe. Now is our chance to come together to prove that Washington is once again capable of leading this country."

Later that evening Both campaigns say that the candidates plan to meet Thursday with President Bush at the White House.

9:15 a.m. McCain appears at the Clinton Global Initiative in New York. Former President Clinton introduces McCain and praises him for bucking his party and spending a lot of time on global warming.

McCain thanks Clinton but gets right to the bailout situation and his decision to suspend his campaign.

"I cannot carry on a campaign as though this dangerous situation had not occurred, or as though a solution were at hand, which it clearly is not," he says. "As of this morning I suspended my political campaign. With so much on the line, for America and the world, the debate that matters most right now is taking place in the United States Capitol."

McCain also says something that sounds political: "No Wall Street executives should profit from taxpayer dollars. Let me put it this way: I would rather build a bridge to nowhere — and put it square in the middle of Sedona, Arizona — than take money from teachers and farmers and small-business owners to line the pockets of the Wall Street crowd that got us here in the first place."

11:05 a.m. McCain takes off aboard his campaign plane from Newark International, bound for Washington, D.C.

Midmorning McCain's running mate, Alaska Gov. Sarah Palin, visits a firehouse in Manhattan, near the site of the Sept. 11 attacks. Palin was in New York meeting with world leaders. She planned to travel on to Philadelphia but did not have any scheduled campaign events.

11:45 a.m. McCain lands at Reagan National Airport. Plans are for him to go to his Senate office. Reporters covering his campaign will accompany him, but aides are being very careful to distinguish between campaign events and official Senate business.

1:00 p.m. The McCain campaign plans to suspend all advertising and fundraising, in addition to campaign activities. NPR's Peter Overby points out that McCain does not need to do any fundraising, since he took $84 million in public financing. The McCain campaign is also receiving money from the Republican National Committee, but the RNC has not yet said whether it will also stop raising money.