Accessibility links
Obama, McCain Face Off Over Spending And War John McCain and Barack Obama skirmished over issues ranging from the nation's fiscal crisis to its foreign threats in their first nationally televised debate. The two senators pressed their basic themes: McCain stressed his experience, while Obama claimed his was the broader vision.

Obama, McCain Face Off Over Spending And War

Obama, McCain Face Off Over Spending And War

First presidential debate on the economy and foreign policy 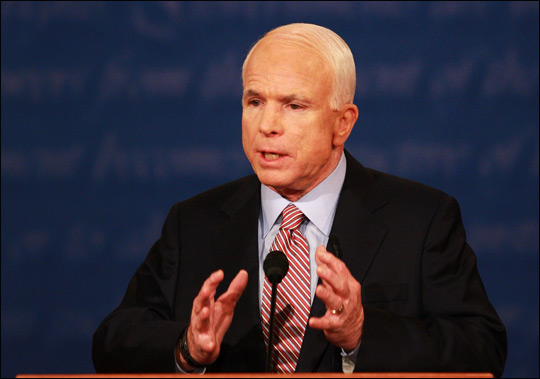 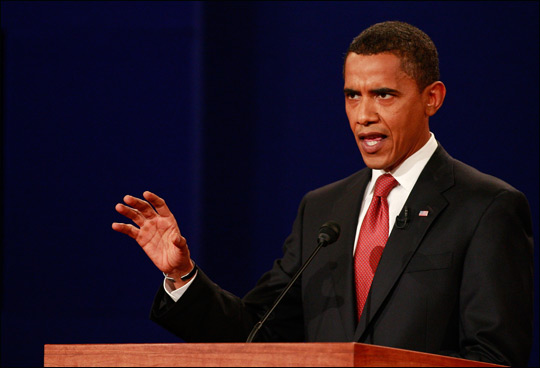 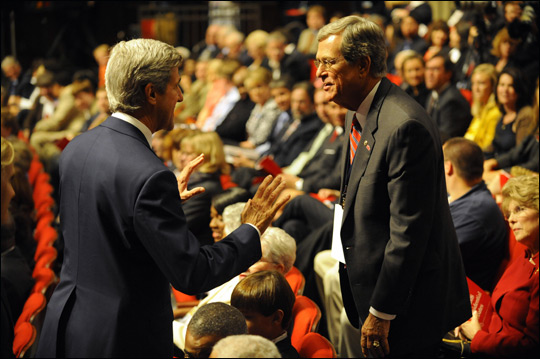 The two senators pressed their basic themes: Republican McCain stressed his experience, while Obama claimed that his was the broader vision. Obama tried to paint his rival as an extension of George W. Bush, while McCain sought to portray the Democrat as a tax-and-spend liberal.

Moderator Jim Lehrer of PBS began the debate with the most immediate question on most voters' minds: where each candidate stood on the proposed $700 billion bailout for Wall Street. Both men agreed that Congress needs to take action, but neither committed to supporting specific parts of the plan.

McCain asserted that Obama had "the most liberal voting record in the United States Senate," while Obama tried to link McCain to what he said were "eight years of failed economic policies promoted by President Bush."

Lehrer followed by asking how each candidate, as president, would cope with the revenue lost to the bailout. Obama said that he would go slower but would not stop what he said were priorities: working toward energy independence, fixing the health care system and remaining competitive in education, science and technology.

McCain said that he would focus on cutting spending, and he accused Obama of being "a recent convert" in his opposition to big spending and budget earmarks. McCain promised that as president he would veto any pork barrel project, regardless of which lawmaker proposed it, declaring, "You will know their names, and I will make them famous."

This debate was supposed to be about foreign policy and national security, but it very nearly didn't happen, after McCain insisted that he wanted to postpone the match until lawmakers reached a deal on a rescue package for the financial markets. After prospects for a quick agreement slipped away, McCain said that he would take the stage with Obama at the University of Mississippi in Oxford.

The foreign policy part of the debate began with questions about the candidates' signature disagreement: the war in Iraq. Obama, who opposed the war before he ran for Congress, asserted that McCain was repeatedly wrong about the war, insisting that the U.S. was victorious in the years when American strategy was failing.

McCain pointed to his own support for the "surge," the U.S. troop buildup in Iraq in 2007, saying that Obama had refused to acknowledge the success of the strategy carried out by Gen. David Petraeus. Obama countered, "John, you like to pretend the war began in 2007."

Obama has maintained consistently that the Bush administration's single-minded focus on the war in Iraq was a diversion that allowed al-Qaida and the Taliban to regroup in Pakistan. He tried to tie his rival to that strategy.

For his part, McCain sought to portray Obama as naive and inexperienced. He hit at him for having said that he would negotiate with Iranian leaders without preconditions. He said a presidential-level meeting with Iran's Mahmoud Ahmadinejad would legitimize someone who has called Israel "a stinking corpse" and has said that the Jewish state should be wiped off the face of the Earth. Obama countered by saying that such talks would be undertaken with "preparations," not preconditions. He noted that a key McCain adviser, former Secretary of State Henry Kissinger, has advocated talks without preconditions.

The two candidates pursued their themes of experience versus vision in skirmishes over the conflict between Russia and Georgia and the question of North Korea's nuclear program.

Immediately after the fact, many analysts saw the candidates' first contest as a draw. Foreign policy was regarded by many as a strong suit for McCain, but Obama was able to hold his own with his familiar theme that the Bush administration had squandered military and foreign policy resources on the war in Iraq.

The two men are scheduled to face each other twice more. They'll meet next on Oct. 7 at Belmont University in Nashville, Tenn., and again at Hofstra University in Hempstead, N.Y., on Oct. 15. Their vice presidential running mates, Sarah Palin and Joe Biden, will meet once, in a debate at Washington University in St. Louis on Oct. 2.