Accessibility links
'Miracle At St. Anna' Writer, Cast Share War Stories Spike Lee's Miracle at St. Anna is about the forgotten contribution of African-American soldiers during WWII. One of the men in the all-black Buffalo Soldiers Division risks his life to save an Italian boy. Farai sits down with three stars of the film, as well as writer James McBride. 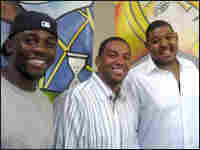 Watch Video Of This Interview On Our Blog
toggle caption
Bettina Wiesenthal-Birch, NPR

Director Spike Lee's latest movie, Miracle at St. Anna, is about the sometimes forgotten contribution of African-American soldiers during World War II. It's based on James McBride's novel of the same name.

While battling racism from the U.S. military and attacks from the Nazis, one of the soldiers in the all-black Buffalo Soldiers Division risks his life to save a young Italian boy.

Watch Video Of This Interview On Our Blog
Spike Lee's Epic Canvas, Painted With Broad Strokes Sept. 26, 2008
Who Won This Fight? Spike or Clint?