Accessibility links
Google's Android Software Debuts On New Phone The long-awaited "Google phone" has arrived. The G1 phone carries Google's Android software and runs on T-Mobile networks. Though its touch screen and online integration make the G1 analogous to Apple's iPhone, the Android platform is open for use by multiple phone developers. 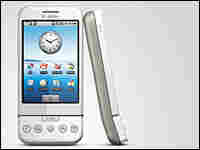 The G1 phone, built by HTC, comes equipped with software by Google and runs on phone networks provided by T-Mobile. Courtesy of HTC hide caption

Google Is Calling. Will You Answer? 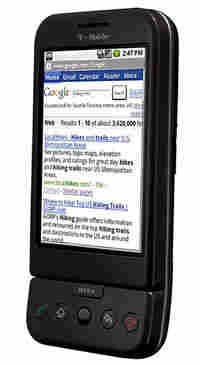 The new Google phone or G1 offers consumers an alternative to Apple's iPhone. The Android-powered phone was created with an open door for software developers. Courtesy of T-Mobile hide caption 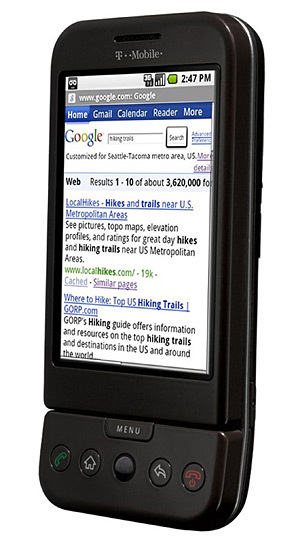 The new Google phone or G1 offers consumers an alternative to Apple's iPhone. The Android-powered phone was created with an open door for software developers. 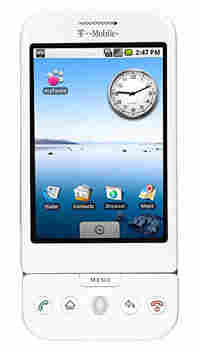 Analysts say the first version of the G1 is Google-centric, but many other cellular phone manufacturers will have the opportunity to create their own version. Courtesy of T-Mobile hide caption 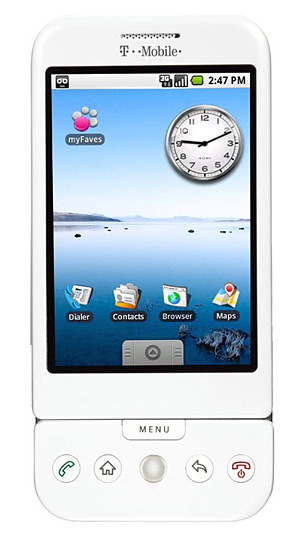 Analysts say the first version of the G1 is Google-centric, but many other cellular phone manufacturers will have the opportunity to create their own version.

Google's entry into the mobile phone universe may offer software developers an open door for innovation. And out of the box, the phone will offer consumers easy access to all things Google.

But is that enough? Analysts say the new phone is the closest anyone has come to offering a phone similar to Apple's iPhone.

Here, a look at what's in store for consumers.

What is the Google phone?

The G1 phone, unveiled Tuesday by T-Mobile, is the first to run on Google's mobile software, known as Android. Available starting Oct. 22, the $179 phone features a full touch-screen, a trackball and a pull-out keyboard.

Customers who want to use the G1 will have to sign up for both a voice and data plan. T-Mobile says it will offer $25 and $35 data plans. The phone will run on a 3G network, and T-Mobile expects to have the network running in 27 major cities by November.

What can it do?

In addition to making calls, the phone will be loaded with Google's search, maps, calendar and instant messaging and e-mail programs, as well as YouTube. There's also a camera, and the phone will play video and music. Users will be able to read, but not edit, Microsoft Word and Excel documents, as well as PDFs.

The phone also has a built-in Wi-Fi connection.

Testing so far shows the G1s to be "very solid devices," says Michael Gartenberg, who covers mobile devices as a vice president for the research firm Jupitermedia. But the phone is lacking in some aspects, such as the ability to immediately connect to corporate e-mail systems and the inability to edit Office or PowerPoint documents. For consumers who use Apple's popular iTunes program, the G1 does not offer a way to seamlessly integrate a music library.

Although this first version of an Android phone is focused on Google services, Gartenberg says, other cell phone manufacturers will be able to create their own versions.

Will this change the cellular landscape?

Google's entry into the mobile device arena is "an extraordinarily important milestone," Gartenberg says, because the company is now "brand-identified with consumer electronics." He says Google views the cell phone as "the next PC" and is essentially marking its turf with the release of this phone.

Other analysts agree. Dave Farber of Carnegie Mellon University says the company's move will kick off a "real playoff" among Apple, Google, Nokia and Microsoft.

Google built its business on mining user information, in part, to effectively match advertisers and consumers.

"Google has this overwhelming tendency to keep track of everything that I do. And on a cell phone I'm not really sure I want that," says Farber. "On the other hand, they get it indirectly, anyway, since a lot of stuff I do in the cell phone goes to Google."

Google's mobile software is based on the Linux operating system and was created in conjunction with a group of more than 30 technology companies called the Open Handset Alliance. Android is open source software, which means developers who don't work for Google are allowed to see the source code and create a range of applications to work with it. Google says the software platform ultimately may be used in devices beyond mobile phones.

People can buy applications for the G1 at something called the Android market. Developers have to be approved to sell in this market, and users will rate their applications — a user-response concept that YouTube developed.

Apple created a similar marketplace called the App Store for its iPhone, but the rules are different in that the company not only determines which developers sell there, but also which applications get sold.

"Apple is getting to be a royal pain in determining who can get at their applications store," says Farber, who welcomes the concept of an open forum for selling applications.

Apple did not respond to a request for comment.

The G1, which is manufactured by HTC, will be locked for use exclusively with T-Mobile. That means it won't work with other cell providers. However, such restrictions didn't stop people from finding work-around solutions when the iPhone was released.

A Google spokeswoman says the company expects there to be many different versions of phones powered by Android, offered by a variety of cell phone manufacturers and wireless service providers, in the coming years.

Verizon Wireless said it plans to offer its customers handsets that use the Android platform, but its primary focus in this arena will be to provide phones that will be compatible with an entirely different open network, called LiMo, which also runs on the Linux operating system.

Sprint, which is part of the Open Handset Alliance, has yet to announce any plans for an Android phone, according to a spokeswoman.

Google said the new phone would run a "light" version of Chrome that has been optimized for the small screen. Chrome was released as a test, or beta, version earlier this month.

Will it appeal to both Mac and PC users?

"It's going to be a rough thing if you're used to one environment and you have to switch," says Farber. He says the Android phone may be a hard sell for Mac users, and part of that may be because Apple already has a large network of stores and a broad-based marketing campaign for the iPhone.