Accessibility links
American Pizza Chefs Study With The Master For decades, pizza chefs — or pizzaiolos – around the world have held a deep admiration for Italian pizza maker Graziano Bertuzzo. As of this month, pizzaiolos can take classes from the master of their trade at a new pizza-making school in Northern California. 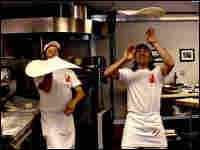 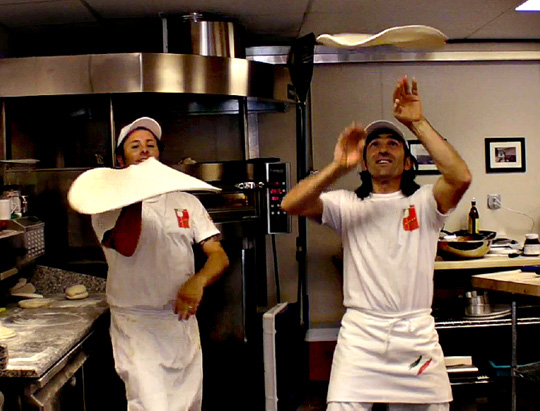 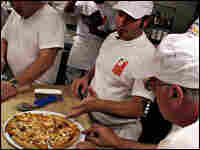 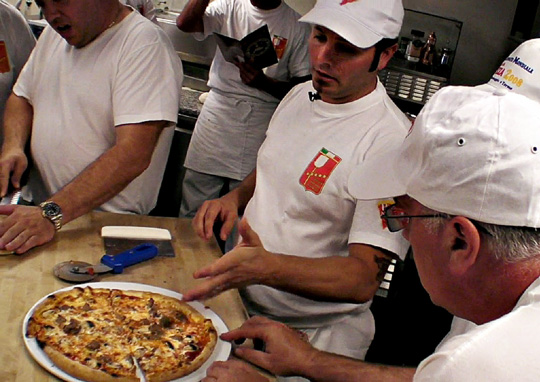 Pizzaiolos at a new pizza-making school in Northern California.

For decades, pizza chefs — or pizzaiolos — from around the world have made pilgrimages to Italy to study under the master, Graziano Bertuzzo. But as of this month, American pizza makers can ascend to that pinnacle of pizza here in the U.S., where Bertuzzo has been teaching at a new school in Manteca, Calif., that grants the treasured degree in Classic Italian Pizza.

It all started with a stunning win at the 2007 World Pizza Championship in Naples, Italy, when Tony Gemignani — a Californian, not an Italian — took the World Pizza Prize. Gemignani had studied for years under the Italian masters, and when he displayed his sparkling trophy on the counter of Pyzanos Pizza, his restaurant in Castro Valley, the ingredients were aligned for him to open a school of his own — and bring Bertuzzo to the huge warehouse of a pizza-teaching kitchen in California.

American pizza chefs flocked to his classes from New York, Chicago and even Oklahoma and Rhode Island. Students like Benito Giordani almost drool with adulation for Bertuzzo.

"He has the hands of a surgeon," Giordani said. "He takes his hand and puts it on top of yours, and he demonstrates how you push the dough out, how you roll it, how you ball it."

"Think of it as a college basketball player going into the NBA as a rookie and playing with Michael Jordan," said Joe Carlucci, another student. "I'm lovin' this."

But Gemignani's pizza school has more than one superstar. His instructors hold prizes in dozens of international competitions, including the highest pizza tosser in the world and the two-time reigning champion in velocidad — a speed competition — who can make five pizzas in 48 seconds.

Gemignani, however, was the first American to ever win the all-out, every-ingredient-counts baking competition in Naples, pizza's homeland.

"[I] deseeded all my San Marzano tomatoes, took all the seeds out," said Gemignani. "Lot of guys didn't do that, the seeds are bitter. People might say, 'Why's he doing that? Yield isn't good in the sauce if you take out all the seeds.' It was the best pizza I've ever made."

That pizza won him the bragging rights to bring the master to California. Asked what he thinks about American pizza, Bertuzzo takes the diplomatic route. He praised American pizza makers for understanding the country's market of thick-crusted pizza loaded with toppings.

"In Italy, the most important part is the pizza dough," Bertuzzo said. "When there's a lot of toppings, it masks the flavor of the dough. It doesn't allow the dough to cook properly in the oven, and this is a major factor in digestion. Because in Italy — Italian pizza making — we take a lot of pride in the digestibility of the pizza we eat."

The ease of digestibility is crucial to Italians, said Bertuzzo, because they eat dinner late at night and then go to sleep — and they don't want overstuffed bellies of incompletely baked dough mixed with sausage, pepperoni, or even pineapples, mushrooms and jalapenos.

"How many times have you eaten a pizza where you feel so bloated, the last thing you want to do is lay down and go sleep?" asked Bertuzzo.

At the school, pizzaiolos critique "teaching pizzas," sliding them from the ovens to tables covered with red and white checked tablecloths.

"Lift the pizza up and look at the bottom of the crust," said Leo Spirrizi, one pizzaiolo describing what he looks and tastes for.

"We like to see some char marks. Char marks are going to give some of that smokiness flavor to it. You could taste the oil that's in the crust, the salt. You can taste the spices individually in the tomatoes. The cheese is going to complement the sauce, " Spirrizi said.

According to Bertuzzo, there is one fundamental difference separating Italian pizza from its American counterpart.

"In Italy, when you say, 'Hey, I am a pizza maker,' it's a job that's very respected and very well-paid," he said, whereas in the U.S. it is more common to see "a 17-year-old boy going to a local pizza shop and slapping an apron on and throwing some sauce and cheese on a pizza."

The master said that even when his American students go back to their pizzerias with their new degrees in Classic Italian Pizza, what will still be missing is the proper respect in the U.S. for high-quality pizza and pizzaiolos.