Accessibility links
The Week America's Economy Almost Died When short-term credit markets seized up last week, many economists and regulators say America faced a terrifying abyss. The nation risked becoming a place where no banks would lend and no customers could buy, where no one could get paid and commerce would cease — perhaps for decades. 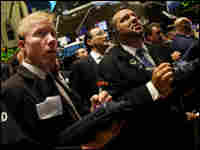 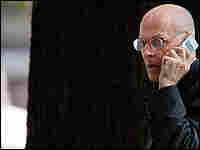 Treasury Secretary Henry Paulson takes a call as he walks to his office from the White House. Win McNamee/Getty Images hide caption 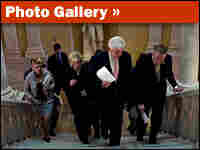 The potential for disaster was horrifying. For people on Wall Street and in the inner circles of government, last Wednesday and Thursday will long be remembered as the time when the American economy survived a brush with death.

The nation's entire financial system slid toward a terrifying abyss, they say — a landscape where no one would lend and no one could borrow, where no one could buy anything and no one could get paid. As Congress and the Bush administration continue debating a proposed $700 billion bailout of Wall Street, those with intimate knowledge of the crisis say that whatever solution emerges must avert future brushes with very real disaster.

The nightmare scenario rattled Mark Peterson, far from the halls of finance, in Memphis, Tenn. "For those of you who've experienced an earthquake, some say it's a soul-wrenching experience, and it's massively moving everything," Peterson says. "And that's last week. There was a monster unleashed. The commercial paper market, which is the most liquid market, probably in the world, basically froze up."

Peterson is treasurer of Servicemaster, which owns, among other things, a lawn care company, Merry Maids and Terminix, which will get rid of your termites. By "commercial paper," he means a specialized kind of short-term loan. It's one of those obscure financial tools that help make the world go around.

"Let's just say you have Terminix come out and treat your house, you write a check," he explains. "Our billing department marks your account as having been paid. What's our cash position? Do you have money or do you need money? Today, our company, we have money.' "

Peterson's company might or might not have cash money the next night. It's no big deal — maybe it needs to buy a lot of termite poison or upgrade its fleet of termite-fighting vans. All companies move between having cash on hand and not having it every day. Some days they have extra money. Some days they need to borrow.

If you're an ordinary consumer, you might use a credit card to bridge the gap. If you're a gigantic company, you use the commercial paper market, a way of borrowing a lot of money.

What Peterson witnessed that frightened him so badly was the sudden seizure of that market. After the failure of the investment bank Lehman Brothers and the near-collapse of insurer AIG, commercial paper suddenly became very difficult to get. On Sept. 17 and 18, the market came dangerously close to freezing entirely — an event that could have paralyzed the financial system.

Tom Corona works with Tradition Financial in lower Manhattan in what he describes as a relatively boring business — at least under normal circumstances. He's the guy companies call when they need to borrow short-term money. The numbers involved in his profession are large, but the processes are routine.

"We would say, 'I'm going to give you a million dollars tomorrow, if you give me $999,000 today,' " he says. "It's hundreds of billions of dollars — every day, every single day." Corona is used to moving sums like that for relatively cheap interest rates.

Last week, Corona's business suddenly stopped being so boring. The cost of borrowing money shot up, as nervous lenders pulled back the reins. The river of capital narrowed to a trickle. "Banks were forced to start paying usury rates to get money," he says. "And even when they were paying usury rates, even if they could get money, they could get only $50 [million] or $100 million. In our market, it's nothing. It's so small. These banks normally could raise billions in an eye blink."

This is what happened last week that terrified Treasury Secretary Henry Paulson, Fed Chief Ben Bernanke and President Bush. This was not a bunch of big investment banks getting their comeuppance for making bad loans.

This was the fundamental flow of the American economy breaking down. Money stopped moving. Big, safe, respected companies far away from all the subprime lending problems had trouble getting the short-term loans they needed to pay their bills.

"I don't think I've ever been this nervous in my career," says Paul Balika of Daiwa Securities, "because the financial system was so close to locking up. I think we were close to the abyss."

Balika watched the meltdown from what he calls courtside seats — his chair in front of a computer screen filled with numbers. What happened that scared Balika so much was the realization of one of Wall Street's most dreaded hypotheticals: a money market mutual fund "broke the buck."

It sounds obscure, and probably bad, but just what does it mean? In normal times, money market funds have much in common with a savings account. They're ordinary means of saving money for many, many Americans. In ordinary circumstances, people view money market funds as totally safe, nearly free of risk. Investors put $1,000 in and get at least $1,000 out — more with interest. But they never expect to lose money.

If a money market fund loses money, that's called "breaking the buck." It's like a tear in the space-time continuum. It's simply not supposed to happen.

Except that it did, last week. On Monday, the Reserve Fund broke the buck. And people freaked out.

"Breaking the buck is sort of like having a serial killer in a high school — it causes a little bit of panic," Balika says. Frightened investors raced to escape money market mutual funds.

It so happens that the main thing money market mutual funds own is commercial paper, the same financial short-term loans that make ordinary businesses like Peterson's Servicemaster outlet possible.

This chain of events is part of what convinced Paulson and Bernanke that the situation had gone too far. If the panic had continued for more than a day, they reasoned, the wider economy would start to shut down.

"What would happen is nobody would be able to borrow money," says Balika. "And how does capitalism work if you can't borrow money? You're back to bartering, pretty much. The extension of capital almost came to a halt — just ended, period."

The key word there is almost. Those short-term credit markets froze for around 12 hours. Then they thawed a bit. If they ever stayed stuck for days, or weeks, well, Bernanke said, the consequences would be worse than the Great Depression.

Other economists, respected ones, argue that's not true. They say people with money will always start lending it, when the price is right. Eventually, the dissenters say, the problem would work itself out.

Right now, how quickly that would happen, if it happened at all, is the $700 billion question.

This segment was produced in collaboration with Chicago Public Radio's This American Life.