Accessibility links
Sonny Landreth's Ghost Notes Landreth is a guitarist's guitarist, but he's not well known outside music circles. His latest CD, from the Reach, is his ninth, but audiences have mostly seen Landreth play slide for the likes of John Hiatt, Jimmy Buffett or Clifton Chenier. 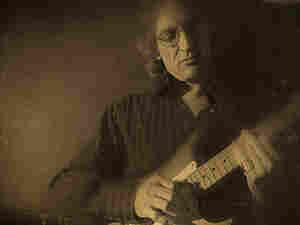 Sonny Landreth is a guitarist's guitarist — a wizard of the slide guitar. His music encompasses Mississippi Delta blues, zydeco, and Southern rock. But he also creates sounds that are all his own — sounds he calls the "music behind the glass."

Landreth lives in a townhouse outside of Lafayette, La., ruled by a mutt named Simco. "That's my stage manager, my couch manager," he says. "He's in charge of security." The house is crowded with amplifiers and guitars. Landreth picks one up — a shiny metal-body resonator guitar — slips a tubular glass slide onto his left pinky finger and demonstrates what makes his way of playing slide different.

Most guitarists rest the slide on the strings over the frets to create a quavering, fluid sound. They pluck the strings above the guitar's sound hole. Landreth does that, finger-picking in a Chet Atkins style, but he also plays chords, as he says, on the "wild side" of the slide — up on the neck — creating what John Hiatt calls "ghost notes."

"It makes a more complex sound," says Landreth. "It opens up a lot of colors because you have harmonics and tones on both sides of the glass."

But there's more. Landreth has perfected a tremolo using the palm of his hand as a baffle over the sound hole, which he combines with the notes behind the glass. "Kind of an accordion effect," he says. "So you can manipulate the sound with the motion of your palm."

It's Not Only Blues

If you listen to Landreth, you hear the unmistakable sounds of Acadiana in his music. Though Landreth was born in Mississippi, his father moved the family to Lafayette when Sonny was young. That's where he began to drink in the music of South Louisiana. He heard it on the radio and jukeboxes and in clubs like the Blue Angel Lounge. He heard Cajun, zydeco, swamp pop and rock 'n' roll.

Landreth learned to incorporate what he was hearing and eventually went on to hold the distinction of playing with what one admirer calls the "Holy Trinity of Acadian music": songwriter and Cajun rocker Zachary Richard, the Grammy-winning Cajun supergroup Beausoleil and the King of Zydeco, Clifton Chenier. Landreth was in his late 20s when he became the first white member of Chenier's Red Hot Louisiana Band — standing every night between drummer Big Robert St. Julian and Clifton Chenier's brother, Cleveland, on rub-board. That, Landreth says, was the beginning of his real musical education.

He says, "People ask me about it and I liken it to if I'd grown up in Chicago and Muddy Waters had taken me under his wing, that was what it was like for me here in this part of the country."

Hard To Pin Down

For 35 years, Landreth has mostly been known as a sideman — contributing his distinctive sound to other people's bands and other people's albums. But he's also released nine CDs of his own. The most recent, from the Reach, features such guest stars as Eric Clapton, Vince Gill and Jimmy Buffet. The album briefly hit No. 1 on Billboard's blues chart — to the extent that it is blues.

"Sonny's difficult to find a category for. He's unique," says Tony Daigle, a Grammy-winning recording engineer from South Louisiana who's worked with Landreth for years. "He has this Creole-Cajun influence, but yet it's 60s and 70s kinda good rock 'n' roll. And he's such a unique guitar player, nobody else does what he does."

Next month, Landreth will be featured for the first time on the cover of Guitar Player magazine. The article says it's "a long-due testament to the immense impact that he's had on the guitar scene."

So, at 57 years old, with graying shoulder-length hair, is Sonny Landreth finally ready to break out? "If a guy ever deserves to break out it's Sonny," says Herman Fuselier, a long-time entertainment writer in Lafayette and host of a radio program called Zydeco Stomp. "We're in this era now where people are famous for just being famous, and don't have an ounce of talent. Here's Sonny with talent running out of his ears and out of his fingers. So he deserves it. But, the type of guy Sonny is he really doesn't need the fame. The people that know who he is and how good he is they already know that, they really appreciate that."

Landreth is pleased with the magazine cover, the respectable CD sales, the emergent buzz about him. But it seems like he gets more excited about coming home from his almost nonstop tours with his band and others and going down to Don's for a cup of gumbo and a Manhattan, or sitting in around Lafayette with the Mamou Playboys.

"I have to come back to recharge my spiritual batteries, I always say, that's part of the blessing of living here — the culture. For me, it's about the food, the music, the dance. There's a very soulful undertow to all of this," he says. "You plug into it, you don't forget it."

The same could be said for the music behind the glass.