Accessibility links
Finding A Hero Amid Fading Memories In 1938, Nicholas Winton was set to go on a ski vacation when a friend called and asked him to help Jewish children flee the Nazis. The young stockbroker saved 660 children, including the mother and aunts of NPR reporter Kim Masters. Masters visits the 99-year-old Winton, who offers a lesson on memory. 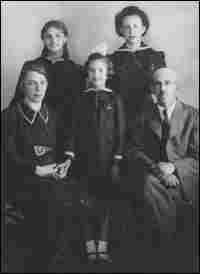 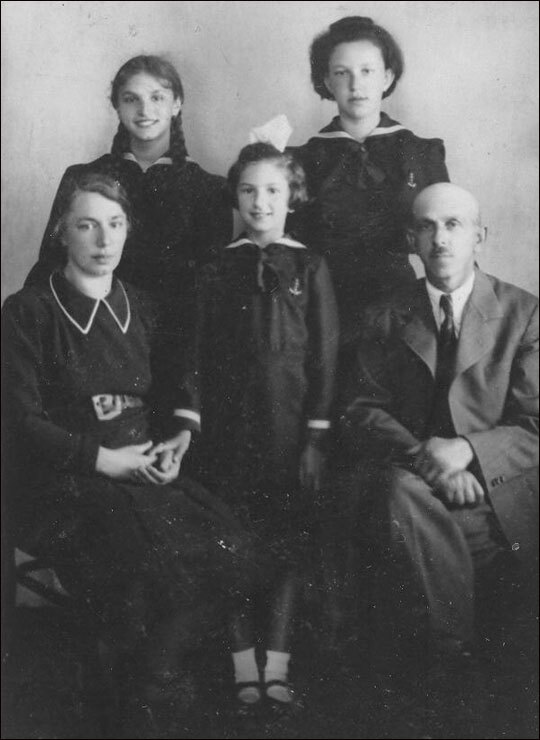 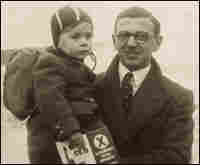 Nicholas Winton holds a child in a train station in Prague in 1939. Winton helped save more than 650 childen by getting them out of Czechoslovakia before the Nazis arrived. Courtesy Nicholas Winton hide caption 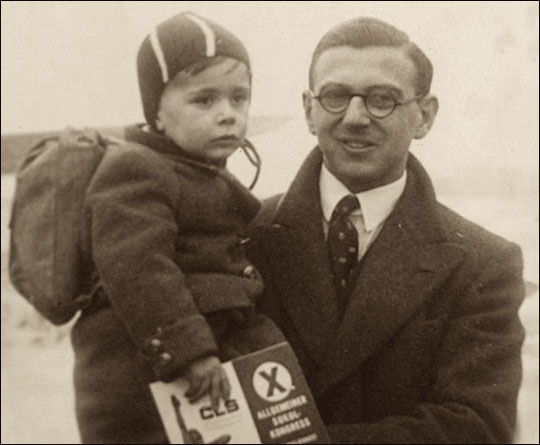 Nicholas Winton holds a child in a train station in Prague in 1939. Winton helped save more than 650 childen by getting them out of Czechoslovakia before the Nazis arrived.

Kim Masters never met her grandmother (left) and grandfather, who were killed by the Nazis. Her Aunt Josi (center) escaped on a train arranged by Winton and recently celebrated her 85th birthday in London. Courtesy Kim Masters hide caption 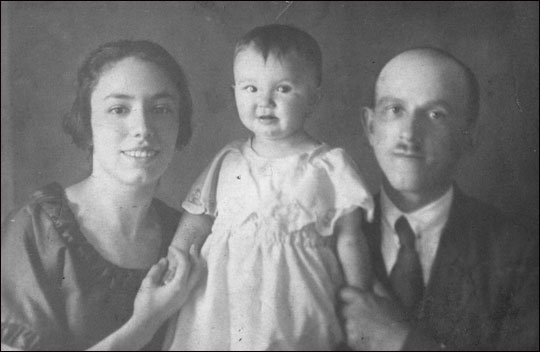 Kim Masters never met her grandmother (left) and grandfather, who were killed by the Nazis. Her Aunt Josi (center) escaped on a train arranged by Winton and recently celebrated her 85th birthday in London. 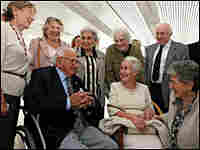 Winton meets with some of the children — now grown up — he saved with the kindertransport. Courtesy Nicholas Winton hide caption 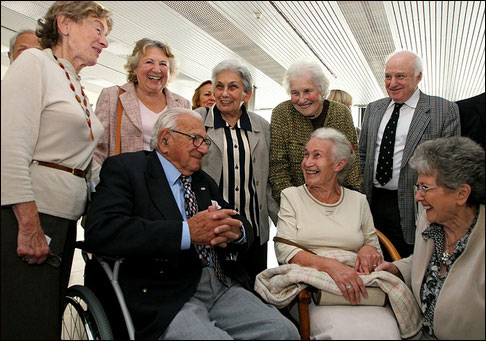 Winton meets with some of the children — now grown up — he saved with the kindertransport. 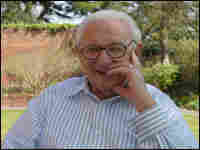 Winton, 99, lives by himself in a snug house with a lush garden west of London. To some degree, he feels that too much has been made of his efforts. hide caption 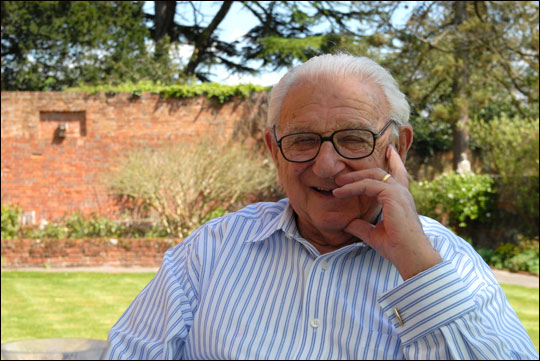 Winton, 99, lives by himself in a snug house with a lush garden west of London. To some degree, he feels that too much has been made of his efforts.

It's been nearly 70 years since my mother and her sisters climbed aboard a train and left their small village in what was then Czechoslovakia. No wonder their memories have faded.

"I remember very well how we had to feed the geese," my mother says.

"Our maid actually used to feed the geese," says Josi, her sister.

"And laundry ... it was taken to the river to be rinsed," my mother recalls.

"I don't remember ever anybody taking things to the river," Josi objects.

And so it goes.

My mother is 83. Aunt Josi was the eldest of the three — she just turned 85. When we gathered in London recently for her birthday party, I had a rare opportunity to ask the two sisters, side by side, about their memories. (Elli, the youngest, died of cancer some years ago.) Despite the conflicts, both sisters agree that theirs was a happy childhood:

"In the winter we skated on the river and we skied and sledded," my mother says. "In the summertime, we went to the woods and picked berries, and it was a very beautiful life."

Josi, Alice and Elli were born in Trstena, a village in a mountainous region near the Polish border. The three girls left home on June 29, 1939, on a special train — a kindertransport — arranged to protect children from the advancing Nazis. They were taken to London, where my aunts Josi and Elli stayed. (My mother later ventured to the U.S., and settled in Washington, D.C.)

My mother's family was quite religious — though of course the sisters disagree about exactly to what extent. There weren't many Jews in Trstena, they say. My mother was the only Jewish child in her class and felt self-conscious as the Catholic students recited daily prayers. But she and Josi say they were mostly oblivious to anti-Semitism.

They played with gentile friends, though my aunt says some of their parents told dark tales. "Horrific stories of what the Jews did — killed a child at Passover, drank the blood and — such horrible things! It showed later, when the Nazis came around. Our great friends ... turned against all of us."

Even as the Nazis drew near, the children still were not really aware of the threat. But their parents had been warned. My mother's uncle worked for one of the grand spas in what is now Slovakia, and the company posted him to Berlin. He saw firsthand what was happening, and he warned his sister to get the children out of the country.

"My mother started to sew and prepare all the clothes for us," my mother remembers. "She just sat at that sewing machine and sewed and sewed." My mother still has her flowered orange dress, an embroidered nightgown and a pair of pajamas with the letter A (for Alice) on the breast pocket.

When the day of departure arrived, my aunt says the tension was obvious. "In the bedroom, our father was sitting on the edge of the bed and he was crying. And I [had] never seen him cry before," Josi says.

Most of the villagers had disparaged the idea of sending the children away. But my grandparents took their girls to Bratislava and put them on the train. Josi was about to turn 16, my mother was 14 and Elli, the youngest, was 10. My grandmother, naturally, was distraught.

"We kept on saying, 'Take Elli off the train,' " my mother recalls. "We said, 'Keep her! Keep her!' " And her conflicted mother almost succumbed — taking the tiny girl off the train — before finally putting her back on — the last time my grandmother would ever see her daughters.

The train was there only because of a young British stockbroker named Nicholas Winton. Just 29 at the time, he'd been planning to go on a ski trip to Switzerland when a friend asked him to come to Prague instead to help refugees fleeing Hitler's advancing army. Winton went and became alarmed about the fate of Jewish children if the Nazis invaded — as he knew they would. He set to work organizing the kindertransport and ultimately saved more than 650 children, including my mother and her sisters.

In the decades that have passed since then, many of those who were rescued have grown old and died. But Winton is still alive. At 99, he lives on his own in a snug house with a lush garden near Maidenhead, west of London. His living room is filled with photographs of himself with prominent figures, including Prince Charles and President Clinton. Winton has given up needlepoint in the past couple of years, but he still enjoys bridge. And he gets around — his driving permit is valid until he's 101.

Winton is Sir Nicholas now; he was knighted in 2002. As we settle in his living room, I ask Sir Nicholas what made him undertake a project as daunting as resettling unaccompanied children in a foreign country.

"Nobody had tried to do anything for the children because everybody had said, 'No country is going to allow children in without their parents,' " he says. "But nobody had tried."

Winton says the first challenge was finding countries willing to help. "America was the one hope I had of taking a lot, and they didn't take any," he remembers.

England opened its doors as long as Winton and fellow volunteers could find guardians for each child. Hundreds were rescued, though Winton didn't get to know them — not for 50 years. It wasn't until 1988 that Winton had his first encounter with some of those whom he had saved. The setting was a British television program called That's Life. The host displayed a scrapbook that lists the names of the rescued children, and she pointed to the woman seated beside Winton.

"Vera Gissing is here with us tonight and I should tell you that you are actually sitting next to Nicholas Winton," she said.

The woman beside Winton embraced him; he wiped away a tear. The host asked, "Is there anyone in our audience tonight who owes their life to Nicholas Winton? If so, could you stand up, please?"

The entire audience rose. Just behind Winton stood my aunts, Elli and Josi. "He got up and he looked around absolutely — absolutely — amazed," Josi says.

When I ask Winton about this deeply moving moment, he declines to be sentimental. To some degree, Winton feels that too much has been made of his efforts. What seemed to him like a brief interlude in his life has overshadowed everything else. And Winton feels his story has been exaggerated in the retelling. Maybe that's because people so desperately need heroes.

"It's nothing I can do about it — what you and the press make of it. And all this is something quite outside my life," he says.

For example, one often-repeated aspect of the story is that Winton was so modest that he never told anyone of his work on the kindertransport — that it only came to light when his wife discovered a cache of papers in the attic. But Winton says he did try to interest several institutions in his papers and finally gave up.

That aspect of the story may seem trivial, but it seems to trouble Winton.

"It becomes very difficult at times," he says, "because every time the newspapers say anything, they add a little bit of their own. It makes me completely disbelieve in history." But he's philosophical. "Si non e vero, e ben travato, as Mother used to say," he says with a chuckle. "If it's not true, it's a damn good story."

Winton's saga has become as hazy in some details as have the memories that my mother and her sister have of their childhood. But one thing is clear to me. If it weren't for this man, none of us would be here — not my mother, not my daughter, not me.

In fact, with his contemporaries gone, Winton says he draws solace from his Czech children. As for my mother and my aunt, they take comfort in the fact that their parents knew they had saved their children as they were deported to a concentration camp in 1942.

"I'm sure when they were taken away, they must have thought what a great thing they did to part ... with the children, and save their lives," Josi says.

That seems clear as my mother reads from the last letter she received from her father.

"I am happy you are over there because for us it is not good any more," he wrote. "We will come through and you mustn't worry about us. But I am very happy that you are not here. If you were, I would have many more worries. God keep you well and I always pray that in the next new year, we should be happier."

We don't know exactly where or how my grandparents died — that knowledge is lost forever. Only a drop in the ocean of losses — of family and memory and stories from that era.

Information About 'The Power of Good,' a documentary about Nicholas Winton