Accessibility links
Trial Begins For Men Accused In Fort Dix 'Pizza Plot' The trial of five men accused of a terrorist plot to infiltrate the Fort Dix Army base as pizza guys begins Monday. The defense says the men were merely filmed clowning around at a shooting range. Prosecutors say they were intent on killing soldiers. 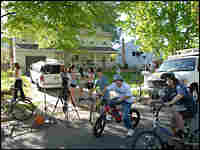 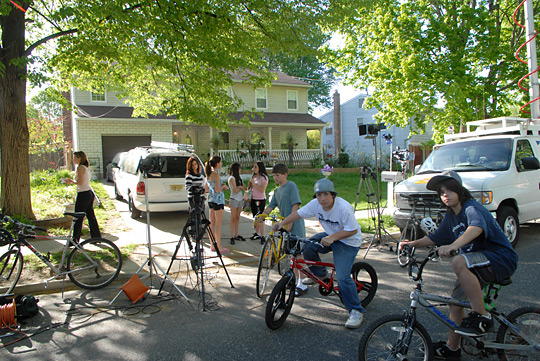 Neighborhood children gather outside the home of alleged terrorist Dritan Duka in Cherry Hill, N.J., on May 8, 2007.

Jury selection begins Monday in the trial of five men accused of plotting to infiltrate the Fort Dix Army base in New Jersey. Prosecutors say the group had planned to pose as pizza deliverymen to enter the base and kill soldiers.

In May 2007, when the FBI made the arrests, Special Agent J.P. Weiss said that homegrown terrorists like the men who allegedly planned to attack Fort Dix pose a real and deadly threat because they operate under the radar. "Today, we dodged a bullet," he said from the courthouse steps in Newark last spring when the arrests were announced.

"In fact, when you look at the type of weapons that this group was trying to purchase, we may have dodged a lot of bullets," Weiss said.

The case began with a phone call from a clerk at a local Circuit City. He'd been handed a video to copy onto a DVD. But as he watched it, he became alarmed. It showed 10 young men firing assault rifles at a shooting range, calling for jihad and praising Allah in Arabic.

The clerk called the local police, and they called in the FBI. At trial, prosecutors plan to portray the video as a terrorist training tool.

The defense says it is no such thing. Rocco Cipparone is representing defendant Mohamed Shnewer, one of the six men arrested. He says the talk about a smoking-gun video is overdone.

"Obviously, people at a shooting range fire guns," Cipparone told NPR several days before the trial was scheduled to begin. "These are a number of young men who were essentially clowning around and having a good time, and it is a far cry from a terrorist training video."

Soon after the video was discovered, the FBI had an informant infiltrate the group. Cipparone says the informant egged the group on and tricked them into saying things they really didn't mean. He said the wiretaps and other evidence will bear that out.

"I think that when they are looked at in context, it will be clear that this is a lot of talk and a lot of prodding by the informant — and certainly talk by the defendants — but nothing that was really a valid plot," Cipparone said.

Terrorism cases of this kind seem to have taken on a familiar pattern. The FBI makes arrests, usually of young men who it claims are holy warriors intent on attack. Defense attorneys respond that their clients are all fiery talk and no action. So far, conviction rates have been mixed.

Still, Cipparone says, the publicity makes it tough to seat juries. New Jersey sent out more than 1,000 summonses to find 12 jurors for this trial. Jurors will be brought in in groups of 75 and must answer an 80-item questionnaire.

Cipparone says voir dire interviews — questioning of the potential jurors — probably won't start before next week. "I don't think it will be easy to seat an impartial jury," he said. "We're all going to try our best, but it is a difficult task."

Before they were arrested, the defendants led what seemed to be ordinary middle-class lives. They worked as convenience store clerks, roofers, cab drivers and pizza deliverymen.

One, Serdar Tatar, was born in Turkey. His nickname is Tony, partly because his family operated a pizza parlor near Fort Dix. Yugoslav Eljvir Duka's friends called him Elvis. His two brothers, Dritan and Shain, are also defendants.

The group was arrested while they were trying to buy guns from an FBI informant. Prosecutors say the group was in their final stages of planning, that they had identified their target, done reconnaissance, had maps, and were trying to secure weapons.

"Luckily, we were able to stop that," Weiss said.

One of the men, Agron Abdullahu, has already pleaded guilty to weapons charges. He is serving 20 months in prison.