Accessibility links
Afghan Opium Business Defies U.S.-Led Attacks Afghanistan is still trying to eradicate opium poppies from a southern region that remains a Taliban stronghold. But a campaign by U.S. and Afghan forces has yet to make much of a dent in a major capital of opium production. 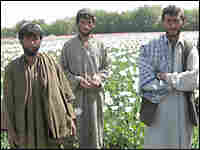 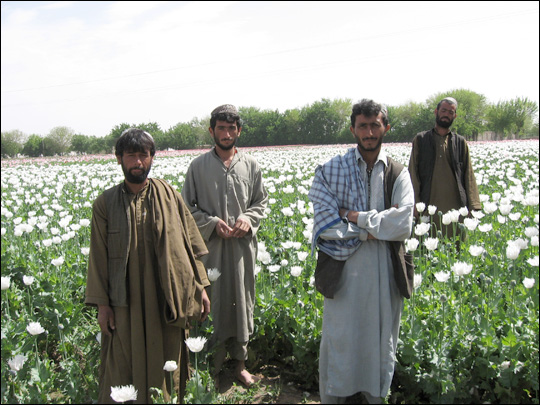 Mahmoud (front, right) stands with fellow opium poppy farmers in front of his poppy fields in Bolan, a village in the volatile southern Afghan province of Helmand.

In Afghanistan, an operation to eradicate poppies in the southern province of Helmand has ended with nearly 19,000 acres destroyed. That, officials say, is nearly three times as much as in all of Afghanistan last year.

Nevertheless, a senior Afghan counter-narcotics official in Helmand declared the operation a failure. He likened it to emptying the sea with a cup.

Helmand is virtually the capital of world opium production. It's also a major stronghold of the insurgent Taliban, which is said to profit from the opium trade.

Poppy farmers are shrugging off their losses in Helmand. There are plenty of poppies left and the farmers are hiring thousands of migrant workers this week to harvest what is expected to be a record-breaking opium crop.

In the village of Bolan, Mahmoud wades in plastic sandals through waist-high poppies that cover his farm like a white blanket. The 23-year-old farmer in a silver prayer cap and checkered shawl points to poppies with the thickest bulbs.

These flowers, Mahmoud says, will make him the most money. In total, his acre of the illicit crop could bring in $2,400.

Even after paying laborers to harvest paste from the bulbs, and middlemen to sell it in neighboring Lashkargah, Mahmoud expects to earn enough to feed his family of 10 for a year. He says the money is 10 times what he'll earn from his wheat crop.

Across a dirt road, Mahmoud's 25-year-old neighbor, Laljan, complains he will earn nothing. His two acres of poppies were destroyed last month by a government tractor. He and other farmers say they are sick of their government interfering with their livelihoods.

They know that growing poppies is illegal. But more important to them is getting the most out of their small farms. Particularly frustrating, Laljan says, is that he and his neighbors each paid up to $20 in bribes to local policemen to spare their poppies from eradication.

Their frustration is exactly what Doug Wankel likes to hear. Wankel, who heads the counter-narcotics task force at the United States Embassy in Kabul, says three years of ever-widening eradication campaigns conducted by Afghan police under American guidance are having the desired effect.

The eradication efforts are widening despite the strong Taliban hold on Helmand, a province the size of West Virginia. But the presence of the insurgents limited the poppy assault by ATVs and tractors to a 60-mile radius around Lashkargah.

"Poppy cultivation is so extensive in Afghanistan you can never do enough of an eradication effort to have meaningful impact on that," Wankel said. "The purpose of eradication is to interject threat and risk into the farmer's calculations as he decides whether to plant next year or not."

Wankel says that if they run an ad campaign this summer warning Afghan farmers that next year's eradication will be worse, it might just convince them to plant something legal.

Abdul Mana does not share Wankel's optimism. He is an engineer who heads the Afghan government's counter-narcotics ministry in Helmand. Abdul Mana believes the punitive campaigns only alienate farmers.

"This method, where for a month or so eradicators come and destroy maybe 12,000 acres of poppies, has no effect," Abdul Mana said. "In Helmand, hundreds of thousands of acres are being grown. Can you empty the sea with a bucket or cup? No."

Abdul Mana says that with his government in control of so little of Helmand, officials need to get on farmers' good side. He says he'd like to see the government give the farmers seeds for lucrative alternatives, like saffron and cotton. The government could then subsidize those markets to make sure prices stay high.

His suggestions have fallen on deaf ears.

The embassy's Wankel agrees eradication is not perfect.

"We do understand that in Afghanistan we are sort of seeing two results this year. In the area where there is security, where there is governance, we can see a strategy that is working," Wankel said. "In the areas where we don't have security, we see there are huge challenges, and Helmand is one of those."

But Wankel says what Abdul Mana is proposing won't work. The Taliban and smugglers exert too much pressure on farmers to grow poppy. Many farmers are tenants, he adds, so there's also pressure from landlords seeking to make a quick buck.

Farmer Mahmoud says, eradication or not, he plans to grow poppies again next year.

"In Afghanistan we don't have jobs, or anything, so we have to grow poppy. The alternative is stealing," Mahmoud said.

But officials say another factor might help put the brakes on Helmand's opium production in 2008: market economics. With poppies so prolific this year, the price of opium paste is expected to drop to $80 or $90 per kilo. That's down from last year's high of $140 per kilo.