Accessibility links
Stem-Cell Debate Returning to Center Stage The Senate is expected to pass legislation that would expand the number of embryonic stem-cell lines eligible for federal research funding. The House passed similar legislation, but a presidential veto is expected.

The Senate is expected to pass legislation that would expand the number of embryonic stem-cell lines eligible for federal research funding. The House passed similar legislation, but a presidential veto is expected.

And I'm Steve Inskeep. Welcome back.

This report may start out sounding like you've heard it before. The Senate is expected to pass legislation on stem cell research today. It would expand the number of embryonic stem cell lines eligible for federal research money. It's almost the same bill that passed last year. And just like last year, President Bush is expected to veto it if it reaches his desk.

Now here's what might be different. Democrats hope they might have the votes to override that veto, as NPR's David Welna reports.

He told a Senate panel the nation would be better served if American scientists were given access to more embryonic stem cell lines than the couple of dozen that President Bush sanctioned nearly six years ago. Iowa Democrat Tom Harkin is the chief sponsor of the bill expanding such access. And he urged his colleagues to heed the NIH director's advice.

Senator TOM HARKIN (Democrat, Iowa): Now Dr. Zerhouni is the federal government's top scientist in the area of medical research. President Bush appointed him to be the director of the National Institutes of Health. So it took great courage on his part to say in public that we need to change direction on stem cell research, but he did so because it's the truth.

WELNA: There's broad public support for more stem cell research since it holds the promise of curing everything from Alzheimer's disease to juvenile diabetes. So a vote against Harkin's bill could hurt senators facing tough reelection bids next year.

One such senator is Minnesota Republican Norm Coleman. He's co-sponsoring a competing stem cell bill that senators leery about using human embryos can vote for later today. It, too, calls for more stem cell research, as long as it does not involved viable human embryos.

Senator NORM COLEMAN (Republican, Minnesota): Some would say it's not all we want, but we're moving the science forward. Let's do that. Hopefully, real hope will be given, and real cures ultimately will be found. And we'll have done in a way that that doesn't - have engaged the culture wars, but in the end, makes real progress with real science.

WELNA: Both stem cell bills are expected to easily pass with more than 60 votes. The big question is whether there's the two-thirds majority needed to override a presidential veto of the bill supporting more embryonic stem cell research.

Senator DIANNE FEINSTEIN (Democrat, California): We're very close to making a veto-proof bill. But it's really up to you - it's really up to your now coming forward and rallying people to call members in the Senate that might be turned around by the specific nature of this bill - the fact that it has passed the House once, the fact that we have something which is essentially as big a compromise as we can possibly make.

WELNA: But bill sponsor Harkin says that election had a big lesson for lawmakers - namely, that if they oppose expanding access to embryonic stem cells, they do so at their peril.

Sen. HARKIN: As you looked across the landscape, that was clear that the people voted last November for candidates who supported embryonic stem cell research - on both sides of the aisle, I might add. It wasn't necessary at one party or the other.

WELNA: Democrats concede, though, that while they may be within one vote of a veto-proof bill on the Senate, getting a similar two-thirds majority in the House will be much harder. And that's what it would take to override the presidential veto, threatened again yesterday by the White House.

INSKEEP: Here's a bit of a timeline. The first embryonic stem cells were isolated in mice in 1981. It wasn't until 1998 that researchers managed to derive stem cells from human embryos, and you can follow key moments in the resulting ethical debate at npr.org. 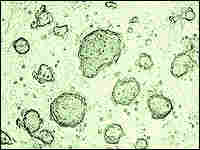 The first embryonic stem cells were isolated in mice in 1981. But it wasn't until 1998 that researchers managed to derive stem cells from human embryos. That kicked into full gear an ethical debate that continues to this day. Read about key moments in the controversy so far.

The Democratic-led Senate on Tuesday took up legislation that would expand federal funding for embryonic stem-cell research, defying a White House veto threat.

Last year, that hot-button issue prompted President Bush to exercise his veto power for the first and only time in his administration. Congressional Democrats are hoping that this year, their expanded numbers and public pressure will give them a better shot at overriding a presidential veto.

The bipartisan bill would expand the number of embryonic stem-cell lines eligible for federal research funding, lifting restrictions that President Bush put in place in 2001. The bill is very much like one passed by the House in January, and nearly identical to the one which the president vetoed last year.

But some things have changed since that veto. For one thing, there are more Democrats who back such legislation in both chambers. And last month, the bill received a politically potent endorsement from the man whom Mr. Bush appointed as director of the National Institutes of Health, Dr. Elias Zerhouni.

Sen. Tom Harkin (D-IA), who's a chief sponsor of the legislation, recounted some surprising testimony that Zerhouni gave to the appropriations subcommittee, which Harkin chairs.

"I asked him whether scientists would have a better chance of finding new cures and treatments if the administration's current restrictions on embryonic stem-cell research were lifted," Harkin said. "Dr. Zerhouni said, unequivocally, yes."

Just as they did last year, a number of leading Senate Republicans have lined up as co-sponsors of the stem-cell bill. Sen. Orrin Hatch (R-UT) says he thinks President Bush is misguided:

Polls show wide public support for expanding embryonic stem-cell research. Lawmakers who vote against this bill are likely to vote for another bill on the Senate floor: It calls for expanded research on stem cells, as long as they're not derived from living embryos.

One of its sponsors is Sen. Norm Coleman (R-MN), who insists he's not trying to draw votes away from those who back the other stem-cell bill.

"I have the greatest respect, the greatest appreciation for what they're trying to accomplish, the most noble goals," Coleman said. "And this is not a bill against anything. It is simply saying there is a political reality, that when the Harkin bill passes and is vetoed, that as of January 1 of 2008, there will be no additional stem-cell research that is federally funded, and we're looking for a way to move that forward."

Both bills are likely to get more than 60 votes in the Senate. But it's not clear that the bill expanding embryonic stem-cell research can get the 67 votes needed to override a presidential veto. Sen. Arlen Specter (R-PA) on Tuesday called for a massive march to drum up more support.

"If we put a million people on the mall, they would be within hearing distance of the living quarters of the White House," Specter said. "And with 110 million people who are affected directly, personally, or indirectly through their families, there is the potential for sufficient political pressure to provide enough votes to override a veto – if, in fact, the president were to veto the bill."

He added, "It is my hope that the president will relent."

But the White House warned Tuesday that if the bill passes, the president will veto it.