Accessibility links
McCain's Health Plan Focuses On High-Risk Pools John McCain's plan to insure more people would rely heavily on high-risk health insurance pools, where individuals with pre-existing conditions buy their own insurance. Critics argue that these pools are expensive and cover only a fraction of the uninsured and uninsurable. 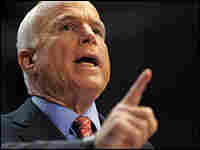 "Over 30 states have some form of 'high-risk' pool, and over 20 states have plans that limit premiums charged to people suffering an illness and who have been denied insurance," he said at a campaign stop earlier this year.

McCain says he'll work with the nation's governors to expand those pools, add new programs to help those with chronic conditions stay healthier and provide more funding. Aides say it could be as much as $15 billion to $20 billion in new subsidies.

The pools, which McCain refers to as a "guaranteed access plan," are a key element of his health reform plan, which mostly relies on encouraging more people to buy their own insurance in the individual, rather than the employer or group market.

This distinction is important because if you get insurance as part of a group or through your job, it's illegal for insurers to discriminate based on your health. But no such protections exist in the individual market, where even John McCain probably couldn't buy coverage. That's because like millions of other Americans, he has a pre-existing condition. In McCain's case, he's a cancer survivor.

Since insurance companies can and do turn down individuals who apply for coverage if they're in less-than-perfect health, many states have set up high-risk pools to give them a place they can get insurance, even if they have to pay substantially higher premiums.

But Karen Pollitz of Georgetown University says there's a big problem with state high-risk pools that goes beyond money. "When people get to these high-risk pools, they usually can't get in."

Pollitz said when she helped with a project run by the American Cancer Society, "they literally sent thousands of people who were uninsured, who needed to buy coverage, who had cancer, to the high-risk pools in their state, and more than 90 percent of the time, the people couldn't enroll."

That's what happened to the Meadows family of Highlands Ranch, Colo. Debbie Meadows is 58. She gets disability insurance and Medicare. Her husband, Gene, is 61. He works as a service adviser for a car dealership outside Denver. His employer offered health insurance, but Debbie Meadows says the couple decided that at $800 a month, they couldn't afford it.

So Gene Meadows decided to find his own, cheaper insurance. But when he went for the physical, the doctor discovered he had prostate cancer. That meant no private insurer would take him. So the family turned to the state's high-risk pool, CoverColorado. It costs even more — $1,000 a month. Their grown son will have to help pay the bill, Debbie Meadows says.

Meadows says there were other paperwork requirements, too, like notes from her husband's doctor. "It's just been a lot of red tape and a lot of phone calls," she says, "and it's insane. It's insane."

Then there's another catch. Even if he gets into the pool, Gene Meadows will still have to wait six more months before it will cover his cancer. That's not unusual. Many high-risk pools delay covering the condition that makes patients eligible in the first place.

That's what happened to Barb Fleming in Missouri. She was diagnosed with breast cancer in January.

Fleming, who's a self-employed saleswoman, did have health insurance when she got the diagnosis, but it was about to expire. The Missouri high-risk pool let her in — but told her she'd have to wait a full year for the coverage she needed most.

"I was approved for the pool as of March 4 ... but it would not cover my cancer," she said. "So I was going to be paying $908 a month for an insurance — and I have been — that was not covering the cancer."

Fleming was lucky. She got her surgery before her old policy ended. She didn't need chemotherapy. And, after months of appeals, Missouri officials lifted the 12-month waiting period.

But even though she's doing OK now, the fight took its toll. "I hate to say this, but I felt more in charge of my cancer than I ever felt about the insurance situation," she says.

Limits On Who Qualifies

But there's a reason the high-risk pools are so hard-nosed about who and what they cover, says Mary Nell Lehnhard of the Blue Cross and Blue Shield Association.

"The idea is that you want to discourage people from waiting until the last minute — the day they know they're going to the hospital for surgery, and that's when they buy insurance," says Lehnhard.

"The idea of insurance is you get them in early; they subsidize other people," she says. "Then they get sick; they're subsidized by somebody else. But if everybody waits until the last minute, you don't have any subsidies, (and) you're just paying out for expenses."

Lehnhard says high-risk pools are needed to get the sicker people out of the regular individual insurance pool. Otherwise, they drive up everyone's premiums. That prevents the healthy, young people from signing up. And those are the people insurance companies need most.

"You want to make sure your coverage is affordable enough so that these very price-sensitive people in their 20s will buy coverage," she says.

Lehnhard and consumer advocate Pollitz, however, agree that while in theory the high-risk pools being proposed by McCain are a good idea, so far they've mostly been just too expensive. That's why only about 300,000 people total are enrolled in them, out of 46 million uninsured.