Accessibility links
Live From San Francisco, It's Justin Kan's Life At a time when most people are doing everything they can to protect their privacy — especially online — 23-year-old Justin Kan is living in a world with no privacy at all. He streams his life as it happens at Justin.tv, courtesy of a webcam strapped to his hat. Laura Sydell reports on the latest trend in the democratization of fame. 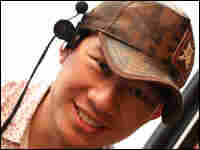 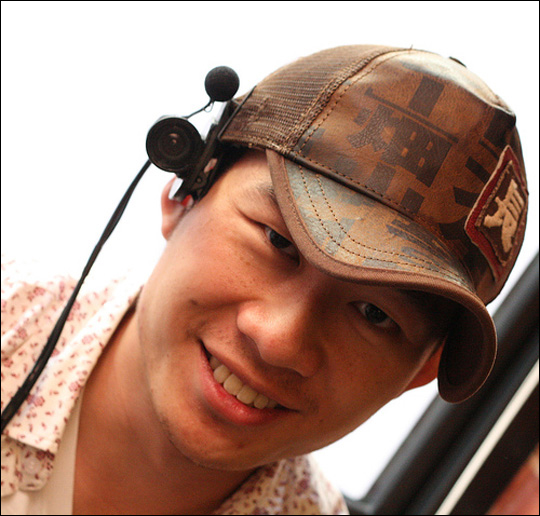 After months wearing a webcam, Justin Kan says, "I feel naked without it." 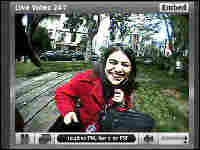 NPR's Laura Sydell interviews Justin Kan in San Francisco — knowing that her editor back in Washington, D.C., is probably watching live at Justin.tv as she works.

Millions of people think nothing about putting personal details up on MySpace. Small cameras are cheap, and they can be connected to the Internet. So why not put everything online? Justin Kan has: He's living his life with a camera strapped to his head.

It's not as if it's a new idea. Remember the 1999 movie EDtv, about the ordinary guy whose life was the subject of a 24/7 cable television show?

"I swear I came up with the idea myself," says Kan. "But no one ever believes me now. They're like, 'Oh, it's so much like EDtv.'"

The small camera sits just above his right ear, strapped to a hat so it's always at eye level. Viewers really do get to see his world from his point of view.

"Before launching the show, I had been wearing the camera around for about three months as we built out the technology and stress tested it," Kan says. "At this point I kind of feel naked without it."

Fans of Justin.tv can watch him shop, eat, sleep, work, ride the bus, even get interviewed by NPR in real time.

"We're not making this up," Kan says. "Everything's unscripted. This is really what it's like to be Justin Kan or ... follow Justin Kan around all day every day."

But the love affair with watching real life unfold before the lens goes back at least to the late 1940s, when Candid Camera made its debut. In the early 1970s, there was the documentary series An American Family on PBS, which followed the lives of the Loud family.

Still, one might wonder what's so interesting about watching the mundane activities of a 23-year-old living in San Francisco. Yet tens of thousands of people have been doing it every day — and chatting about it in real time — since the launch of Justin.tv about three weeks ago. Justin.tv fan Chris Pirillo admits it's a kind of rubbernecking impulse that has gotten him absorbed in Kan's life.

Justin.tv runs in the background on the computer of Pirillo's Seattle home all day. The fact that there is no editor makes Justin.tv more appealing to Pirillo than the carefully crafted — and sometimes even scripted — "reality-TV" offerings on the networks.

While the 33-year-old Pirillo says he could never put his own life in front of a camera, it may be that the under-30 crowd cares less about privacy. Go to MySpace, and you find personal information about individual loves, lives, and tastes. Judith Donath, a professor of media arts and sciences at the MIT Media Lab, says this may be the Internet generation's way of rebelling.

"The more warnings they have that this is dangerous, in some ways it makes it more appealing," Donath says. "In 15 years, when they are older and risk-taking is less interesting, they may be much more reticent about what they say."

But Kan claims he plans to keep this up — possibly for the rest of his life — and his company has plans to expand. Paul Graham of the seed capital firm Y Combinator gave Kan and his associates $50,000 in startup money, which Graham believes was well spent.

"Their ultimate plan is to make a sort of a Web TV channel that has hundreds of different people walking around with cameras on their heads," he says.

The idea of an army of people broadcasting themselves and those around them might sound frightening to some. But Justin.tv is already bringing in advertising dollars. And despite the lack of privacy, Kan isn't having any problems getting dates.