Accessibility links
Paul Newman's 'Lincoln Portrait' At Carnegie Hall Along with his acting career, Paul Newman made a name for himself as a philanthropist and humanitarian, traits that made him an appropriate choice to narrate Aaron Copland's Lincoln Portrait, in a performance at Carnegie Hall with the St. Louis Symphony Orchestra. 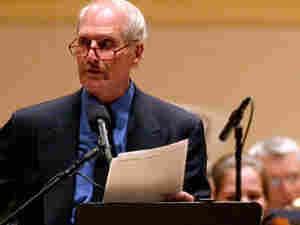 Paul Newman performs with the St. Louis Symphony. The actor said that Abraham Lincoln's words about "government of the people, by the people and for the people" was a prophetic statement. Steve J. Sherman hide caption 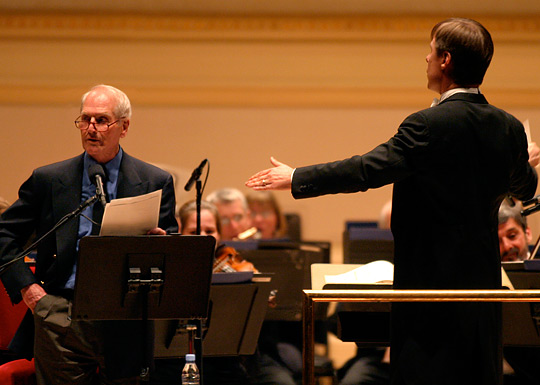 Paul Newman performs with the St. Louis Symphony. The actor said that Abraham Lincoln's words about "government of the people, by the people and for the people" was a prophetic statement.

Paul Newman, who died of cancer Saturday at age 83, will always be remembered for his movie roles. But he had other ambitions and talents, including race cars and his Newman's Own line of food products, the proceeds from which he donated to charity.

Another interest took Newman to the cathedral of classical music, Carnegie Hall, to join conductor David Robertson and the St. Louis Symphony Orchestra as narrator in a performance of Aaron Copland's Lincoln Portrait.

With all Newman's years of acting on stage, performing with an orchestra, he said, was still a new and unusual feeling for him.

"It's one thing to be sitting in the eighth row with the orchestra [in front of you]," he said. "It's another experience to have them in back of you, on top of you, where you can actually get the concussion of the instruments. It certainly jacks you up."

Newman, with his history of humanitarianism and philanthropy, was outspoken about equality in government and business, as well as a staunch admirer of Abraham Lincoln's abilities as both a president and a writer. Newman said that his favorite moments of the Lincoln Portrait take place right at the end.

"I think it would be good for all of us, both citizens and people in government, to think about those last phrases: 'Government of the people, by the people and for the people,'" Newman said. "It's a prophetic statement, I think."

Copland wrote his Lincoln Portrait in 1942, after the bombing of Pearl Harbor. He meant for it to boost spirits during that difficult time. Listeners might recognize a couple of American songs embedded in the music: Stephen Foster's "Camptown Races" and the folk song "Springfield Mountain."

(Special thanks to the St. Louis Symphony Orchestra and conductor David Robertson.)