Accessibility links
Newman Reflects On An Acting (And Active) Life Oscar Award-winning actor Paul Newman died on Sept. 26 of complications from lung cancer. In this 2003 interview, the star of Butch Cassidy and the Sundance Kid and Cool Hand Luke discusses his early work — both as an actor and as a salesman. 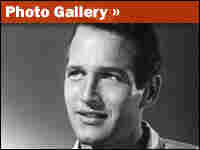 Oscar Award-winning actor Paul Newman died on Sept. 26 of complications from lung cancer. Over the course of his decades-long career, Newman starred in dozens of hit films, including Butch Cassidy and the Sundance Kid, Cool Hand Luke, The Color Of Money and The Road To Perdition.

Newman grew up in Ohio, where his father owned a sporting goods store. He began working in the store when he was 10. Later he ran a laundry business and took a turn as a door-to-door salesman peddling Fuller brushes — jobs that honed the business acumen Newman would later use to become a salad-dressing entrepreneur.

In the early 1950s and 1960s, Newman studied alongside James Dean and Marlon Brando at Manhattan's Actor's Studio. At the time, he didn't realize that he would be a part of a new generation of acting.

Newman viewed his early roles with a critical eye; he remembered his first big-screen gig in the biblical epic The Silver Chalice as "real wreckage," and he lamented the fact that he "was always working awful hard [in his early roles]. ... I take a look at all that stuff that I did previously [and] wish I had another chance to take another crack at it."

This interview was originally broadcast on Oct. 2, 2003.