Accessibility links
Buddhism And The Zen Of Punk Rock Buddhism is finding a large following among fans of punk rock. What could the two possibly have in common? Rebellion and a sense of individual responsibility, according to ordained Zen master and bona fide punk rocker Brad Warner. 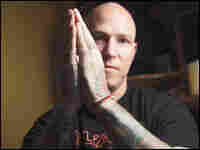 Punk rock and Buddhism are quite compatible, says author Noah Levine. The former drug addict teaches Buddhism to a variety of people, including convicts and the homeless. Courtesy of Blue Lotus Films hide caption

The word "punk" doesn't usually bring to mind meditation. But the growing popularity of Buddhism in the U.S. is attracting an unlikely fan base among punk rock enthusiasts.

What does punk rock have to do with Buddhism? "There's a disdain for authority. There's a strong sense that the individual is responsible for herself or for himself," says Brad Warner, a bona fide punk rocker and ordained Zen master.

The former bassist of Ohio-based punk rock band Zero Defex is also the author of two books on the subject: Sit Down and Shut Up, which promises "Punk Rock commentaries on Buddha, God, truth, sex, death," and Hardcore Zen, which explores Buddhism and punk's overlapping approaches to rebellion.

At some point in a Zen master's day, Warner admits, the punk rock needs to turn off. "I have practiced zazen [which literally means "seated meditation"] in punk rock houses full of filth and garbage, but it's much more difficult," he says.

Noah Levine, author of the memoir Dharma Punx, doesn't quite fit the Buddhist stereotype either. Some people might be put off by his shaved head, silver tooth and his tattoo-covered body — hardly what one might expect from a teacher of Buddhism. But a closer look reveals that the tattoos reflect his Buddhist lifestyle. The left side of his neck reads, "Dharma Punx," with "dharma" meaning truth in Sanskrit; and the right side reads, "Against the Stream," referring to his meditation society.

Although his father is an American Buddhist author and teacher, Levine embraced the practice only after hitting rock bottom in jail. Levine, who says he started doing drugs by the time he was 10, spent his teens as a crack addict. "I came to meditation practice, to Buddhism, strung out on drugs, filled with rage," he says. Now 20 years sober, Levine's group teaches meditation to convicts, the homeless and other groups of people.

Levine's method, summed up in his new book, Against the Stream, has attracted thousands of students all over North America and Europe. His ethic is also captured in a new documentary film titled Meditate and Destroy, about punk rock, spirituality and inner rebellion. Levine says there is always a bit of struggle with meditation, which is another thing that makes it akin to punk mentality.

"Here in meditation, we say, 'Stop thinking, pay attention to the breath.' And your mind says, 'F*** you. I will do whatever I want,'" says Levine. "We begin to understand that it is inner anarchy."

The classic U.K. punk band the Sex Pistols definitely wasn't made up of Buddhists, but they might have liked what some Zen masters say: Our rule is no rule.