The U.S. House has rejected the $700 billion Wall Street bailout plan, ignoring calls for quick passage from the Bush administration and a bipartisan line of congressional leaders. Stocks started to plunge before the final gavel.

From NPR News, this is All Things Considered. I'm Melissa Block. The financial bailout went down today and with it, the markets. The House of Representatives stunned Washington and Wall Street by rejecting the rescue plan, and the Dow plunged nearly 780 points. That's the largest point drop ever. The bipartisan agreement that went up for a vote today was reached over the weekend. It would have allowed the U.S. Treasury to buy up to $700 billion dollars in bad mortgage debt. We'll have several reports. First to NPR's Debbie Elliott from Capitol Hill on why the bill failed.

Unidentified Woman: On this vote, the yays are 205, the nays are 228. The motion is not adopted. Without objection...

DEBBIE ELLIOTT: Those 228 no votes came primarily from a combination of conservative Republicans and liberal Democrats. One hundred and thirty-three Republicans voted no, and many in the conference had bristled all last week at the idea of the federal government stepping in to the financial markets. Georgia Republican Paul Broun expressed their sentiment during debate on the House floor today.

Representative PAUL BROUN (Republican, Georgia): This is a huge cow patty with a piece of marshmallow stuck in the middle of it, and I'm not going to eat that cow patty.

ELLIOTT: Liberal Democrats didn't like it any better. California's Lynn Woolsey asked why Congress would be willing to give a lame-duck administration so much money.

Representative LYNN WOOLSEY (Democrat, California): President Bush and Secretary Paulson have been wrong from the start on just about everything. Do you think they'll be responsible with this money? Think again.

ELLIOTT: In the end, those reservations won out despite sometimes passionate pleas from congressional leaders who had bags under their eyes from the round-the-clock negotiations that led to this moment. House Republican John Boehner appeared to choke back tears when he asked his colleagues to look into their souls and ask what's in the best interest of the country.

ELLIOTT: Even with calls to leave politics aside during the debate, once the rescue package failed, the gloves were off. Democratic Appropriations Chairman David Obey was shaking his head in disbelief as he left the House chamber.

Mr. DAVID OBEY (Chairman, House Appropriations Committee): This is the greatest failure of leadership within the Republican Party that I've seen in all the years I've been here. The president and Mr. McCain together could not deliver one-third of their own party for this. I mean, it's incredible, just incredible. It is incredibly reckless on their part. I'm just stunned.

ELLIOTT: But Republicans blamed Democratic House Speaker Nancy Pelosi for making a speech on the House floor that blamed the economic chaos on what she said was Republican fiscal irresponsibility. Here's minority leader Boehner after the vote.

Representative BOEHNER: We've put everything we had into getting the votes to get there today, but the speaker had to give a partisan voice that poisoned our conference, caused the number of members whom we thought we could get to go south.

Representative BARNEY FRANK (Democrat, Massachusetts): I'll make an offer, give me those 12 people's names, and I will go talk uncharacteristically nicely to them. And tell them what wonderful people they are, and maybe they'll now think about the country.

Rep. FRANK: We don't believe they had the votes, and I think they are covering up the embarrassment of not having the votes, but think about this: Somebody hurt my feelings, so I will punish the country - I mean, that's hard to be possible.

ELLIOTT: President Bush said he was disappointed in the vote; so did Treasury Secretary Henry Paulson. Paulson said he was consulting with congressional leaders to, quote, put something back together that works. We need it as soon as possible, he said. The House is set to come back into session Thursday to try again. House Speaker Nancy Pelosi said the lines of communication are open with the White House and talked of, quote, another bite of the apple.

Representative NANCY PELOSI (Democrat, California, House Speaker): What happened today - it cannot stand. We must move forward, and I hope that the markets will take that message.

ELLIOTT: As for the ramifications if Congress doesn't regroup? Here's Alabama congressman Spencer Bachus, the top Republican on the House Financial Services committee. 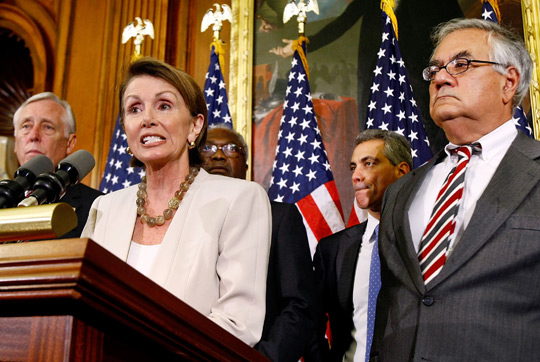 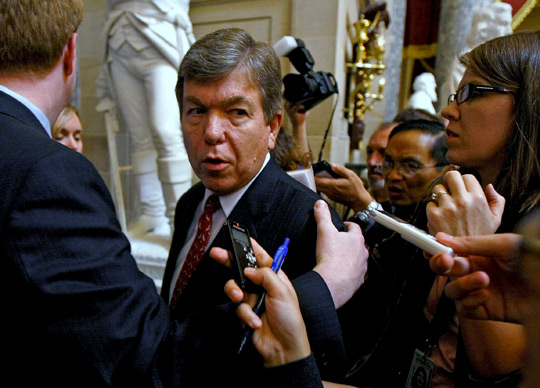 In a shocking defeat that rocked Wall Street, the House of Representatives voted down a $700 billion plan aimed at rescuing banks and unfreezing the world's credit markets.

The news of the 228-205 defeat sent the stock market reeling. The Dow Jones industrial average recorded its biggest closing point drop in history, closing down 777.68 points — or nearly 7 percent — to 10,365.45.

Treasury Secretary Henry Paulson spoke to reporters at the White House after a discussion with President Bush aimed at mapping out the way forward. He said he would keep working to get a bill. "We need to work as quickly as possible," Paulson said. "We need to get something done. We need to put something back together that works."

Market analysts said Paulson and the Bush administration more generally were at least partially to blame for stirring up the sturm und drang that ended with Monday's stock market plunge.

The Bush economic team has been saying for weeks that the financial world as we know it would end if a rescue plan was not put in place in short order. So when the bill failed in the House, investors naturally ran for the closest exits. For all his doom-casting after the vote, Paulson did inject a faint note of confidence. He said the banking system so far "has been holding up very well, considering all of the pressures."

President Bush, with mere months left in office, had staked what little political capital he has left on passage of the bill. He looked a little shell-shocked after the vote.

"I'm disappointed in the vote by the United States Congress on the economic recovery plan," the president said from the Oval Office. "We will work with leaders of Congress on a way forward." House Speaker Nancy Pelosi was just as adamant that the vote "cannot stand."

Instead of adjourning for the year, House leaders say they'll reconvene on Thursday. Sen. Christopher Dodd (D-CT) said that "things need to cool down a little bit" before lawmakers could start resurrecting their financial bailout effort. He said lawmakers needed to settle in and digest what had happened and then move forward. Dodd said he was still confident that Congress would pass a bailout bill in the end.

"This is not an easy vote; our constituents are not happy about this and rightfully so," said Dodd, predicting that it would take another couple of days to work this out. "As angry as they may be right now, they are going to get a lot angrier — and they should — if we don't act."

Recriminations On The Hill

It took little time for the partisan finger-pointing to start.

Republicans said a speech by Pelosi just before the vote led some Republicans to vote against the plan.

House Minority Leader John Boehner of Ohio said that when Pelosi blamed "the Bush administration's failed economic policies" for the current economic mess, she "poisoned" the well. Added Republican Rep. Eric Cantor of Virginia, "There's a reason that this vote failed — and that is Speaker Pelosi's speech."

Rep. Barney Frank, a Massachusetts Democrat, said it wasn't anything Pelosi said. He blamed the Republican side for its lack of coordination. He said Republicans were blaming Pelosi because "they are covering up the embarrassment of not having the votes." Frank said he couldn't imagine any Republican lawmaker would imperil the economy because of something Pelosi might have said. He said he gave Republicans more credit than that.

The day began with the expectation that the vote was going to be a squeaker. The president took the unusual step of addressing lawmakers in a statement outside the Oval Office early Monday morning. He urged passage of what he called a "bold bill" that will "keep the crisis in our financial system from spreading throughout the economy."

Bush said he knew it would be a tough vote to cast, given that most Americans appear to be against bailing out Wall Street financial firms. But he said the only way out of the current crisis was for the Treasury to take on some of the toxic debt that financial institutions have on their balance sheets. The credit system had frozen up, he said, because of all these bad mortgages on the books.

The president did more than just speak to cameras outside the White House. He also called lawmakers before the vote, trying to persuade fence sitters to support the bill, according to White House spokesman Tony Fratto. Clearly, the president's words and lobbying efforts didn't do the trick. By early afternoon, the bill had gone down in flames and the markets went into free fall.

Republican presidential nominee John McCain said it was time to "get back to the drawing board." It is unclear whether he thought they should work on a completely new plan or whether he thought they could tinker at the edges of the current one. McCain said that now was not a good time to assign blame, but that instead, lawmakers needed to focus on fixing the problem.

Even members on the Hill seemed shocked by the bill's failure. Minutes after the vote tally, leaders on both sides of the aisle tried to convert naysayers to put the bill over the top. They even postponed closing the vote in hopes of getting 10 people to change their minds. In the end, after a 40-minute delay, they found only two lawmakers willing to switch their votes.

Rep. Paul Ryan (R-WI) gave voice to what many lawmakers were saying more privately. "We're all worried about losing our jobs," he said, noting that the vote took place just weeks before all 435 House members face re-election. "Most of us say, 'I want this thing to pass, but I want you to vote for it, not me.' "

The final 110-page bill was a far cry from the no-strings-attached bill that Treasury Secretary Henry Paulson had offered Congress just a week ago. The administration ended up accepting limits on executive pay for those who take advantage of the bailout and more oversight of the Treasury's implementation of the bailout plan.

Democrats had wanted bankruptcy judges to be able to rewrite mortgages for homeowners who bit off more mortgage than they could swallow, but that provision was not in the final legislation. Republicans wanted the federal government to insure, rather than buy, the debt. That program did make it to the final bill, but it is optional.

With contributions by NPR staff and wire reports