Accessibility links
What Does Obama's Health Plan Really Cost? Democratic presidential nominee Barack Obama says his health plan would make insurance available to all Americans. But health policy analysts say that the estimated cost of the plan is far higher than what the campaign is saying. 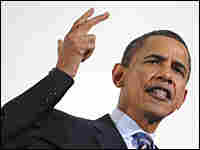 "We'll cut the cost of a typical family's health care by up to $2,500 per year," he often says on the campaign trail.

But it's a promise few health care experts think he can keep.

Granted, Obama has a long list of proposals for health care cost-cutting, including: investing in prevention; fighting diseases before they become expensive to treat; and by investing in a paperless system to cut administrative costs. Obama also says he will cover all Americans and make sure they can take their health care with them if they lose their job.

Actually, Obama's plan wouldn't cover every single American, but it is estimated to reach about 34 million of the estimated 46 million uninsured.

Joe Antos, a health economist with the conservative American Enterprise Institute, says that the kind of cost-cutting Obama is talking about is a good thing, but it's "not anywhere near enough, and not anywhere soon enough." Antos says health experts have been talking about things such as better prevention and moving to electronic medical records for the past two decades, and they are still looking for the answers in many of these areas.

Antos says the biggest problem with Obama's health plan isn't how little it will save, but how much it will spend. One of Obama's key promises is that under his plan, everyone will be able to get a health plan at least as good as those available to members of Congress.

"If your congressman is like your average federal employee, he's got the Blue Cross Standard Option (plan), and it costs in excess of $12,000 a year," Antos says. "That isn't going to happen. It can't happen."

Such a generous benefit package, combined with Obama's promise to limit out-of-pocket health costs, would require enormous public subsidies. The Obama campaign itself estimates the plan could add as much as $60 billion a year to the nation's $2 trillion health tab.

"Senator Obama has put forward the most comprehensive proposal to do this of anyone ever to run for president," he says.

Some financing for Obama's plan would come from money currently going to tax cuts for upper-income people. Cutler says he knows the plan will be expensive. And he doesn't apologize for it.

"Many of the Republicans believe that what we ought to have is a very, very bare bones package," he says, "something with a several-thousand-dollar deductible that maybe doesn't cover prescription drugs, or doesn't cover preventive services. To me, that's just a non-starter."

Cutler says it makes no sense for people to have a health insurance policy that they can't afford to use until they get very sick.

John McCain has also made cutting health care costs a key goal of his health care plan. His list of cost-cutting tools looks a lot like Obama's. Health policy analyst Jeff Goldsmith says both candidates are tiptoeing around the cost issue. And he's not surprised by that, given what happened the last time a president tried to overhaul the health system.

"I think after the debacle of the Clinton reforms, the prudent strategy of a presidential candidate at this stage of the race is to pander, but do not wake the dragon," says Goldsmith — the dragon being doctors, hospitals and other providers of health care.

"You're talking about rearranging the food supply for a $2.5 trillion animal," he says. "That's how big our health care system is. And do you really want to give it a year to organize to stop you from taking its food away? That's basically what we're talking about here."

Of course, given what else is going on with the economy, these plans assume that either candidate is able to make health reform a top priority next year. Or even get to it at all.