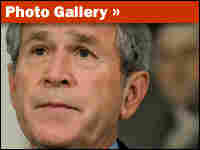 Photo Gallery: Struggle Over A Bailout

Congressional and White House officials are scrambling to structure a new bailout proposal that will attract reluctant lawmakers and soothe the unnerved financial markets after the House rejected a massive rescue plan for the nation's economy Monday.

With foreign leaders urging the U.S. to react quickly, President Bush made a statement on the rescue plan Tuesday morning, vowing that the failure of the $700 billion bailout package was not "the end of the legislative process." He said the country faces the "real prospect" of economic hardship if Congress does not act soon.

"Our economy is dependent on decisive action from the government," he said. "The sooner we take action, the sooner we can get back on the path of economic growth."

The House is scheduled to meet again Thursday.

The bailout package failed 228-205 on Monday afternoon, igniting a huge sell-off in the stock market and sending the Dow Jones industrial average into its biggest single-day plunge, 777 points. Wall Street opened sharply higher Tuesday morning as the president spoke at the White House.

Governments across Asia stepped in Tuesday to prop up the markets after Wall Street's massive retreat Monday. In Russia, meantime, regulators halted trading after markets there looked set for another free fall.

In Europe, where markets opened mixed, the European Commission issued a stern admonishment to Washington, D.C., to live up to its "special responsibility" to solve the global financial crisis. The European body called on Congress to take swift action on a bailout plan.

It was a message that was echoed elsewhere, as the world looked to the U.S. to put its financial house in order and help stabilize markets that have been roiled in recent weeks by a wave of massive failures of banks and financial institutions.

"The outcome has caused a major impact not only on the U.S. economy but also the world economy," said Japan's Economy and Fiscal Policy Minister Kaoru Yosano, urging Washington to renegotiate a workable package.

In Japan, the central bank pumped another 3 trillion yen ($28.7 billion) into money markets Tuesday as part of central banks' coordinated effort to boost liquidity and lending.

Meanwhile, reports in India that depositors were beginning to pull their money from the nation's largest private bank, ICICI Bank Ltd., prompted the Reserve Bank of India to reassure the jittery public about adequate cash reserves.

Across Asia, markets opened sharply lower. But as trading progressed, many indices erased losses, and Hong Kong's market staged a dramatic turnaround to close slightly higher as investors, beaten down by days of losses, snatched up cheap shares.