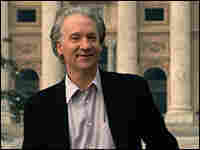 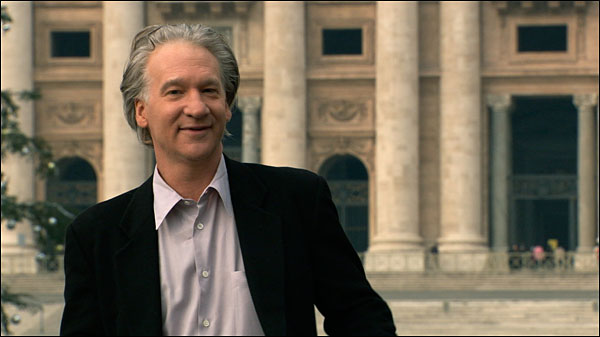 Religulous questions: Bill Maher pays a visit to the Vatican in his new satirical documentary.

If you're familiar with the work of political satirist Bill Maher, you probably know that he thinks religion has done way more harm than good in the world.

In his new film, Religulous — a satirical documentary in which Maher travels to religious sites around the world, ranging from the Vatican and Jerusalem to a Muslim gay bar in Amsterdam and a Christian theme park in Orlando, Fla. — he describes religion as "dangerous."

Directed by Larry Charles, the new documentary offers a satirical — and very critical — take on organized religion and the leaps certain varieties of faith can sometimes require.

At one point, Religulous suggests that "religion must die for mankind to live;" Maher and Charles discuss the film, and their own thoughts on religion, with Fresh Air's Terry Gross, who asks Maher if in the process of responding to religious extremism, he hasn't perhaps become an anti-religious extremist.

"I believe in the doctrine of I Don't Know," Maher responds. "To say 'I don't know' about the afterlife is the only reasonable, and also humble, opinion you can hold."

Maher, the child of a Jewish mother and Catholic father, grew up in his father's church, but has cast aside organized religion as an adult. He suggests that the idea of a personal god who responds to prayer, who performs miracles and battles evil in an active way, is the result of "a long, 2,000-year-old game of Telephone" — and that belief in such a god is by definition extreme.

"The message of Jesus," on the other hand, "is not only beautiful but revolutionary," Maher stresses. "The idea that the meek shall inherit the earth, and that the poor and the powerless have just as much dignity as the powerful and the rich, that was a very new idea at the time — and it has not gone out of style."

The shame, Maher argues, is that that message gets lost amid what he describes as "the magic tricks and the bells and whistles and the nonsense" of organized religion.

In a recent New York Times article Maher described organized religion as "the ultimate hustle," and he likened his role in the film to that of Toto, the dog who pulls back the curtain to expose the shortcomings of the Wizard in The Wizard of Oz.

Maher is best known as the host of the HBO show Real Time With Bill Maher; Charles' credits include Borat (which he directed) and the TV programs Seinfeld and Curb Your Enthusiasm.