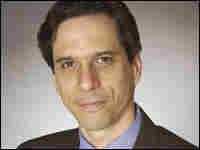 Beliefnet co-founder Steven Waldman has a few thoughts about Bill Maher's new film Religulous, a satirical (and highly critical) look at world religion. "Funnier than I was expecting, and more challenging" is one part of his verdict — alongside "highly offensive" and "quite slippery, in its own way."

Waldman talks with Fresh Air about what the film leaves out in its critique of faith, and about the way religion is figuring in this political season, not least in the candidacy of Republican vice-presidential nominee Sarah Palin.

Waldman says that among other things, Palin's much-publicized comments about "God's plan" for the Iraq war shouldn't alarm religious moderates, or even nonbelievers.

"It doesn't bother me if someone's trying to figure out what is the right thing to do according to God's plan," Waldman says. "The mere fact of someone trying to craft a policy that they think is in sync with what they think their religion or their God would want is fine. That's absolutely what Martin Luther King Jr. did ... It's what George Washington did."

"That's exactly the kind of religion and politics-mixing that the founding fathers were terrified of — and with good cause," Waldman says. "The slippery slope is when politicians claim to know what God's plan is, and try to figure out the policy in order to match it up to God's plan."

As for how Palin felt about that Kenyan minister who prayed that, among other things, God would keep her safe from witches?

"I've got about 75 questions I'd like to ask Sarah Palin about her religion," Waldman laughs. "That's not even in the Top 10."

Other topics in Waldman's wide-ranging conversation with Terry Gross: The role of Joe Biden's Catholic faith in the fall campaign, and the movement of thousands of evangelical Hispanic voters — away from, not toward, the Republican party.

Waldman is founder and editor in chief of Beliefnet, and former national editor at U.S. News & World Report. He's the author of Founding Faith: Providence, Politics, and the Birth of Religious Freedom in America, a book about the myths and mistaken beliefs surrounding the founding of the United States.