Accessibility links
An Autumnal Feast Fall brings the kind of days when you're glad to be inside, standing over a hot stove and listening to the rain on the roof. Celebrate with a hearty meal featuring a farmers-market bounty — and capped with a pear-studded rustic bread pudding. 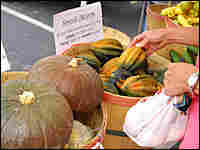 Acorn squash is among the bounty of produce at its peak in local markets, like Laurel Creek Farmers Market in Knoxville, Tenn. Kevin D. Weeks for NPR hide caption 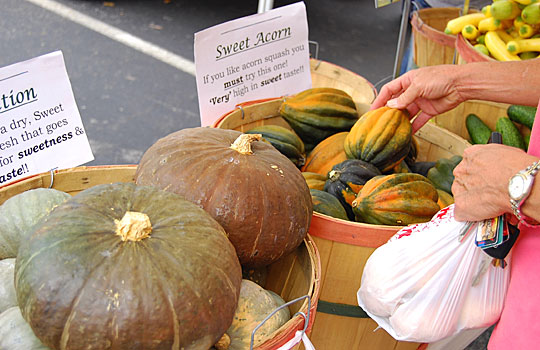 Acorn squash is among the bounty of produce at its peak in local markets, like Laurel Creek Farmers Market in Knoxville, Tenn. 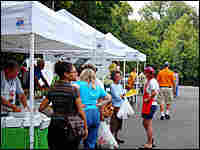 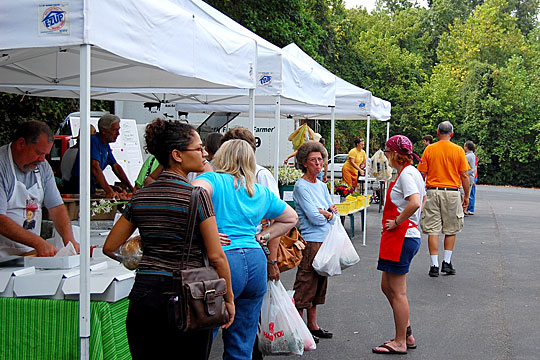 Fall is my favorite season — partly because, at long last, the summer's heat breaks, and I can turn off the air conditioner and open the windows. But mostly, it's my favorite cooking season.

By mid-September, I begin to see signs of fall at the farmers markets. Hard winter squashes like Hubbard, butternut and acorn appear alongside the last of the summer squash. Homegrown cauliflower and Brussels sprouts come just after the end-of-season tomatoes. Baskets of apples with names such as Arkansas Black or Aunt Rachel replace peaches.

Autumn also is the season for pears, a fruit that neither travels well nor stores well — despite the best efforts of commercial growers. If you can find locally grown pears, their flavor and sweetness will amaze you. Even if you must fall back on pears shipped from Oregon or Washington, they'll be at their best in mid- to late fall, when they're picked and shipped immediately.

Persimmons, too, ripen in the fall, and I remember as a kid eating wild persimmons from a tree by our driveway. My siblings and I would pick them from the ground, keeping a sharp eye out for the yellow jackets that so loved them, and then carefully inspect each one for a hint of green. A single bite of the awesomely astringent green persimmon is enough to discourage any further eating for that day.

At this time of year, you may also find wild mushrooms such as morels, chanterelles and oysters. Wild mushrooms can be an iffy proposition because many poisonous varieties are so similar to edible varieties. When I lived in Oregon, I could buy wild mushrooms (for $30 to $35 a pound) at a local supermarket. By the time they reached the grocer's, they'd been vetted by the picker, the wholesaler and the store's buyer. If you're buying directly from a picker, be sure you know the seller's qualifications and reputation.

Don't forget root vegetables this fall. Potatoes and sweet potatoes are at their peak, with the perfect balance of sugar and starch. Turnips and their larger cousins rutabagas (also called Swedes) are also coming into their own, as are parsnips — an often neglected vegetable that's outstanding in gratins and purees, or roasted in the oven.

If you haven't tried it yet, this is the time of year to explore celeriac. It, too, is delicious in gratins and purees, and cut into thin strips, it adds a nice crunch to a green salad.

Fall also is the season for spinach, Swiss chard and Belgian endive. I particularly like chard sauteed in olive oil with pancetta, garlic and minced anchovies. Brussels sprouts also are a fall green vegetable (and one of my favorites), as are broccoli and broccoli raab, a marvelous, slightly tart Italian vegetable only distantly related to broccoli. And don't forget red cabbage.

I also associate fall with fresh pork. Traditionally, hogs were slaughtered after the first couple of frosts. The days were cool enough then to have eliminated the insects and enable butchering a hog without danger of spoilage. And the pigs were at their most robust after a long summer and a fall spent feeding on the mast (acorns, hickory nuts, wild persimmons and various leaves and shrubs) on the forest floor.

Most of the pig was either cured or pickled in some way to preserve the meat. For a few days, however, menus featured fresh pork in all its glory.

Each year, I celebrate fall on the first cold and rainy day of the season — the sort of day when you're glad to be inside standing over a hot stove, listening to the rain on the roof.

A typical celebratory autumnal meal might begin with a soup made from roasted winter squash, followed by pork tenderloin and apples, accompanied by roasted cauliflower and braised Brussels sprouts — and a crisp pinot grigio or sauvignon blanc. How better to wind up such a meal than with a rustic pear bread pudding? 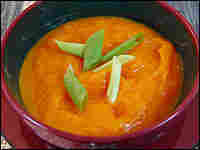 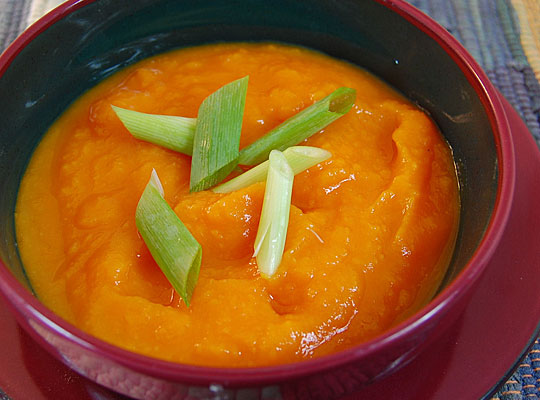 A couple of years ago, I sat in on a class on preparing Thanksgiving dinner. The first course was a winter squash soup that, like most such soups I've had, was notable primarily for its insipid flavor and watery texture. So I developed my own recipe. Roasting the squash instead of boiling it intensifies its flavors, while the maple syrup enhances the sweetness of the squash and the horseradish adds a savory note without contributing noticeable heat. The soup is even better if it melds overnight in the refrigerator.

Cut squash in half across equator, clean out seeds and place cut side down in a baking dish. Add about 1/2 inch of water to baking dish and cook until tender, 45 minutes to 1 hour.

Scrape flesh out of squash into a 2-quart bowl. Melt butter in a 2-quart saucepan over medium-low heat and sweat leeks until translucent. Add 1/2 cup buttermilk, 1/2 cup chicken stock and all remaining ingredients. Bring to a simmer and heat thoroughly.

Puree squash mixture and return to saucepan. Soup should be thick, but still thin enough to require a bowl and spoon to eat. Add additional buttermilk and chicken stock to achieve desired consistency. Taste and adjust seasonings — in particular, you may need a bit more maple syrup depending on how sweet the squash was. 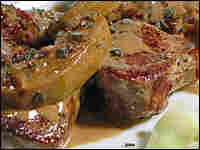 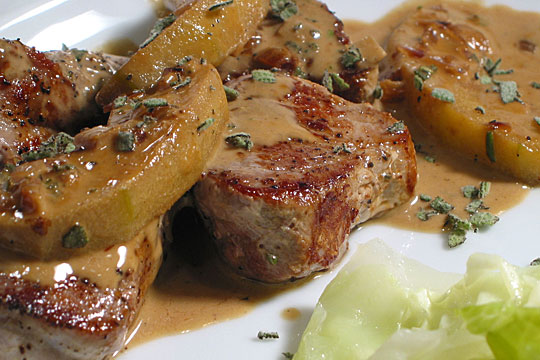 Pork has a striking affinity for fruit, and I often pair it with peach and blackberry gastriques (fruit-based sweet-and-sour sauces), strawberry compote or pineapple, a traditional accompaniment to roast ham. If you can find range-fed pork, it's well worth the effort for the difference in flavor from most commercial pork. Calvados is a French apple brandy and is certainly the best choice, but if you can't find (or afford) it, any apple brandy, or even hard cider or ordinary cider, will work.

Season pork medallions generously with salt and pepper. Heat oil in a large skillet (not non-stick) over medium heat. Add pork and cook on each side until browned, about 3 minutes per side. Place medallions on a plate in the oven.

Add butter to skillet. Add shallots, apples, sage and rosemary and saute until browned. Remove from heat, add calvados, ignite and lightly char apples. Return to heat and add chicken broth, scraping up the fond. Reduce liquid by half. Add cream and reduce to desired consistency. Divide pork among plates and spoon sauce over the top. 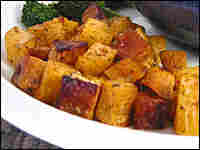 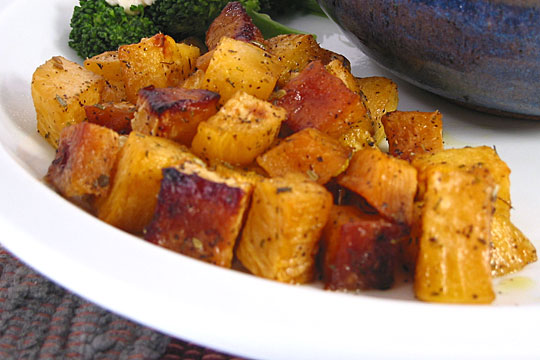 I grew up eating rutabaga (usually pureed with butter) and loved it most of the time. Then I discovered roasted rutabaga and fell in love all over again. Roasting rutabaga concentrates and highlights its natural sweetness. You may wonder at my use of granulated garlic as opposed to fresh garlic, but I've found that the fresh garlic ends up in the pan, while the powdered garlic clings to the rutabaga, ultimately providing more garlic flavor.

Peel rutabaga and cut into 1/2-inch cubes and place in a large bowl. Sprinkle with herbes de Provence, salt, garlic and pepper. Drizzle with olive oil, cover bowl with a plate and shake to distribute oil and spices over rutabaga.

Distribute rutabaga evenly on baking sheet, ideally with at least a half-inch of separation. Bake for 30 to 40 minutes, stirring after about 20 minutes, until edges are browned and flesh is tender. 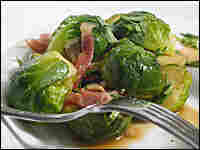 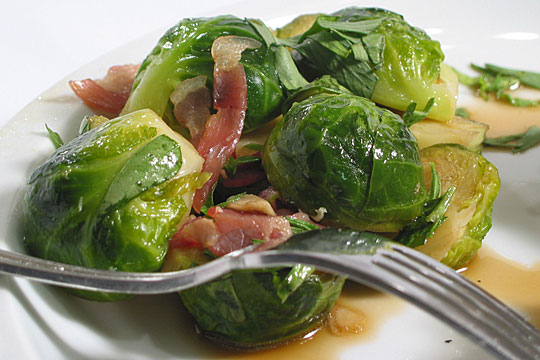 I was shocked to learn a couple of years ago that my mother didn't like Brussels sprouts. She served them fairly frequently when I was a child, and I grew to love those "baby cabbages." I learned of her dislike when I served this recipe and her comment was, "Not bad." I've also served them to a fellow who claimed to have eaten a total of one Brussels sprout in his entire life. He ate six that evening. The trick to sprouts is not over-cooking, which releases sulfur compounds. The mustard and sweet vinegar send the flavor in new directions.

Trim base of Brussels sprouts and pick off torn, discolored and bug-eaten leaves. Bring a quart of water to a low boil, add sprouts and cook until tender, about 10 minutes.

Drain water and add remaining ingredients to pot. Return to stove and cook over low heat another couple of minutes, tossing to coat sprouts. 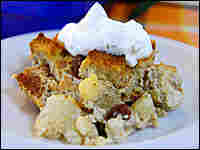 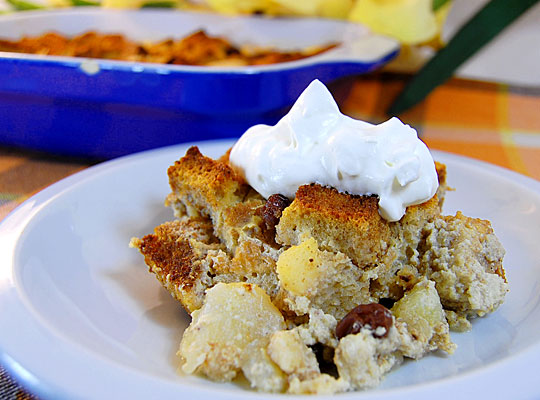 Too often, bread pudding is a soggy, eggy mess with muddled flavors and little in the way of character. My friend Q Correll thought the same thing, and as I set out to fix squash soup, he set out to fix bread pudding. I'm happy to report that he succeeded. The keys here are using whole-wheat bread (find something fairly dense; commercial sandwich bread doesn't work) and toasting the bread to give it additional textural character. Q's recipe is for an apple bread pudding, and his last trick was adding apple cider to the custard. This is a pear pudding, but I've adhered to Q's discoveries while tweaking specific ingredients to highlight the pears. I find pear nectar in the Hispanic section at the grocery store.

1 cup half and half

Toast bread on both sides until well-browned, and cut into half-inch cubes. You should have 6 to 7 cups.

Whip eggs and brown sugar together in a large bowl. Mix in milk, cider, half and half, vanilla and spices. Add bread, pears and raisins and stir. Pour into a shallow casserole such as a 9-by-13-inch rectangular Pyrex dish.

Place casserole in a larger pan in the middle of the oven and add enough boiling water to large pan to come halfway up the sides of the casserole. Cook for 70 minutes, checking toward the end to be sure water doesn't boil away.

Whip cream to soft peaks, drizzle in amaretto while continuing to whip, and continue until stiff peaks form. Top pudding with cream.